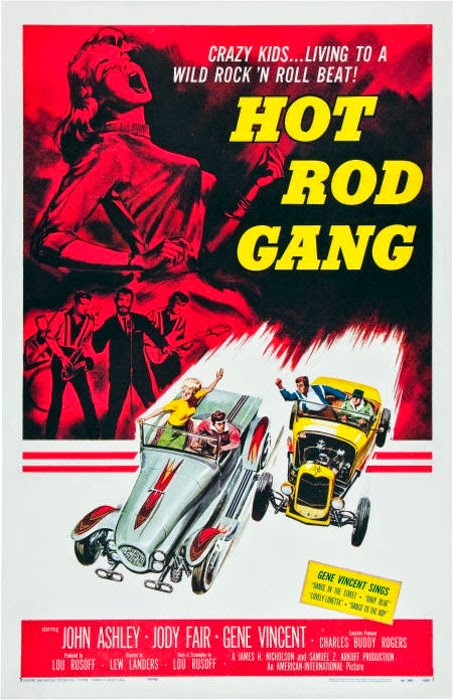 When the rent comes due on their clubhouse, Johnny (Ashley), the leader of our Hot Rod Gang, has a plan to get the scratch to get the landlord off their backs. Now, this plan entails him winning the next big drag race. Of course, to do that, he must first raise some cash to finish fine-tuning his jalopy first. (In fact, I don't even think the thing is built yet. Anyhoo...) Luckily, his new girl, Jody (Fair), has a back-up plan to raise the cash and fix the car so they can win the race to make the rent and save their clubhouse. Seems she knows Gene Vincent, and the girl is convinced she can sway the Be-Bop-a-Lula'n rockabilly wild-man to put on a show so they can raise the cash and fix the car to win the race and make the rent to save their clubhouse. 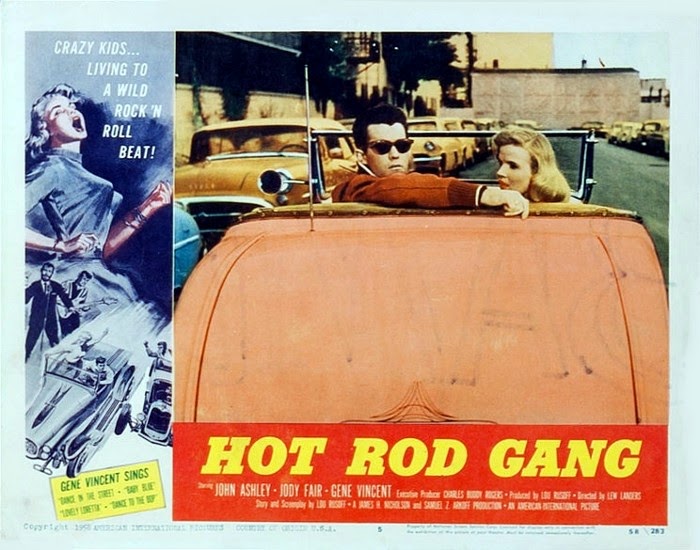 Alas, Vincent is booked solid, but the singer is acutely aware of Johnny's own singing prowess and convinces him that he should be the one to put on a show so they can raise the cash and fix the car to win the race and make the rent to save their clubhouse. But! Johnny refuses, citing that if his kooky old aunts (-- not to mention they're his sole meal ticket --) will disown him if they ever found out about his double-life as a Grease-Ball Hot-Roddin' Rock 'n' Roller. 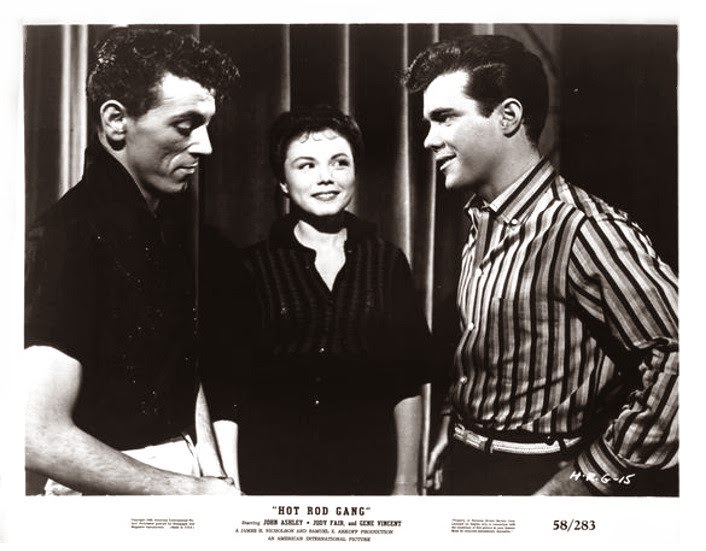 Ah! But Vincent and Jody brainstorm a way around that and cook up a bop'n beatnik disguise for Johnny. Thus, our bearded and pompadour'd heartthrob can jive and wail, like, incognito, man, so he can put on the show to raise the cash and fix the car to win the race and make the rent to save their clubhouse... 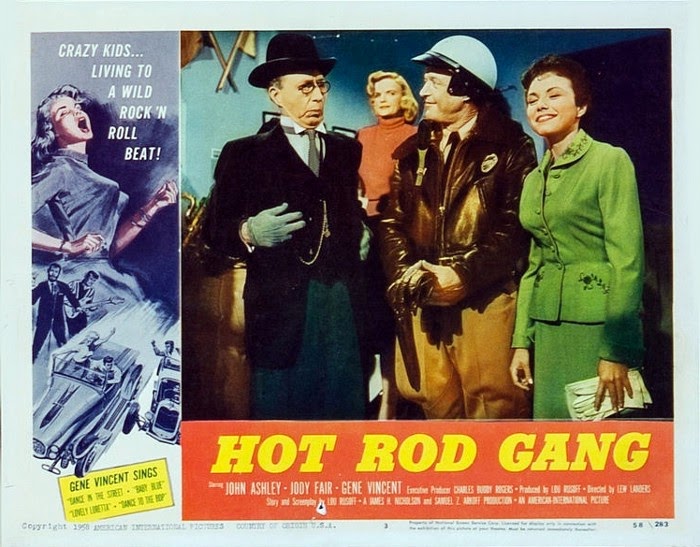 Wow. Just another heaping helping of crock-n-bull provided by veteran American International stock screenwriter, Lou Rusoff, with Lew Landers just walking everyone through it as fast as he possibly can. And did I mention that Johnny is also being framed for series of car thefts by his rival racers? No, well, then lets just forget I brought this moral clause up. I'm having a hard enough time dealing with those Spinster Aunts and their wild attempts to be hip to the hep. Yeesh. 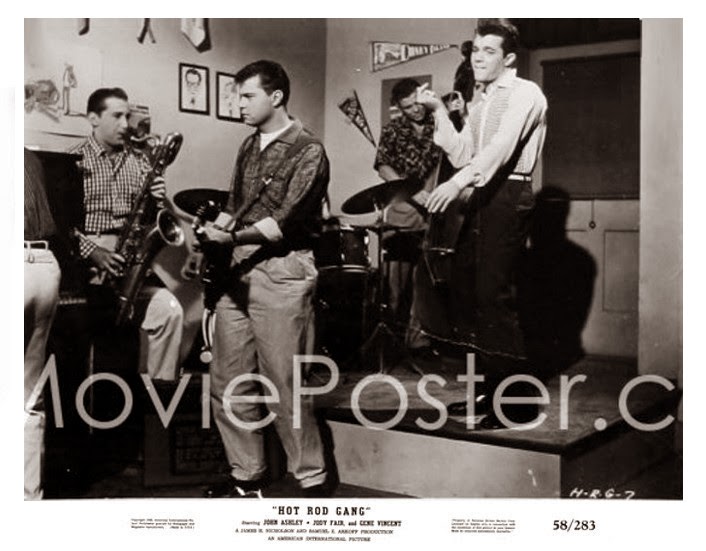 Okay, I didn't think it was possible, but John Ashely is actually worse at the onscreen Rock 'n' Roll thing than Arch Hall Jr. All of his performances are canned and dubbed in, and I wouldn't even venture a guess as to if that is really him singing or not. Now I've always liked Ashley as a supporting beachnik for Frankie and Annette, and I loved his later producing work in the Philippines, but his early starring vehicles for AIP were pretty odious and this thing does little to blow that particular cinematic Bell Curve. 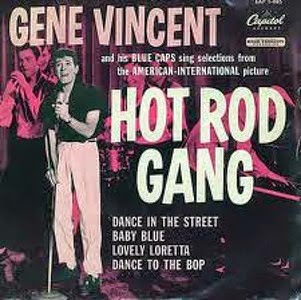 Luckily, we do have Gene Vincent anchoring the movie, and, along with the Blue Caps, he performs "Dance in the Street", "Dance to the Bop", "Lovely Loretta" and "Baby Blue".

I know Eddie Cochran's back-up band shows up, too, but why Cochran himself doesn't make an appearance is anyone's guess. And one can only laugh at Ashley's beatnik as, once more, the brass at AIP understood the beat culture about as well as they did the hippie and biker scene, losing almost everything in their translation. 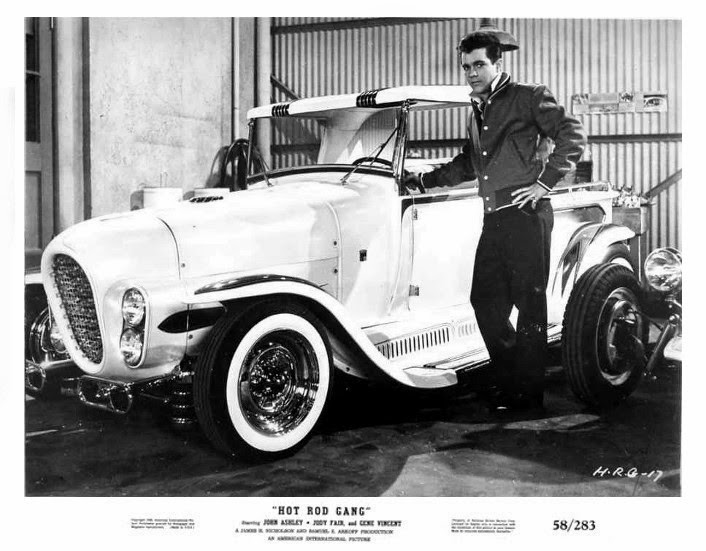 I swear, I normally have a high tolerance for this kind of venture, but even I have my limits. Add it all up and this whole can of stoopidity known as Hot Rod Gang is, more or less, just plain stupid.

Poster campaign for Hot Rod Gang at the Archive.

Newspaper ads for Hot Rod Gang at the Morgue. 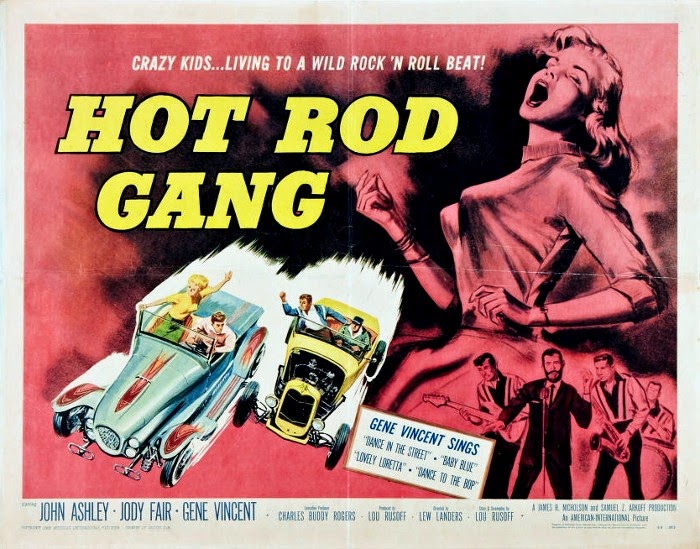 Oh, and do they really slap a fake beard on the poor guy? Fake beards in 1950s B movies are the WORST.

Rocketbra ahoy! Yeah, you can kinda see it in the bottom corner of the half sheet. Again, I usually dig this kinda thing, but this one was just plain dumb.