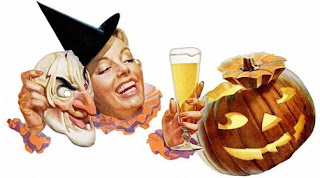 I had big plans for October this year. Massive, creepy and kooky updates for the Brewery, the Archive and the Morgue, and even toyed around with idea of participating in one of those 31 Days of Horror blogathons. And then things kinda fell apart. To sum up, I'll recount a phone conversation I had with my sister just as October was waving goodbye to September. "Rob," I said, "I need some advice. I know this guy whose having some health issues..." And after rattling off several symptoms that included horrific indigestion, chills, inexplicable pains that wouldn't go away in certain left leaning appendages, and acute chest pain that flared up horrifically at times but then never seemed to go away, I asked, "Should this guy go see a doctor or just get to the emergency room?" 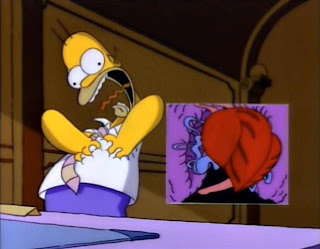 Without missing a beat, my sister, a trauma nurse, saw through my ruse and told me to get to the emergency room as soon as possible. And so, after a quick call to my parents and boss, I did just that and announced to the attendant behind the desk "I think my heart is trying to kill me." With that, I was soon prone and wired up and answering a lot of questions multiple times with the same answers multiple times for each new set of faces coming in with a battery of tests to follow ... In the good news/bad news department, after an overnight stay at the hospital for observations, prodding, poking and ultra-sounding, I was told my ticker was fine and was definitely not on the verge of plugging up as I'd feared. Perhaps it was the small gallstones they'd discovered, but the general consensus was this attack was some form of hiatal hernia, where my guts, no longer satisfied with protruding outward decided to advance upward, putting pressure on certain nerves that mimicked a heart attack. So, it was all good news but no real answers as to what exactly happened. I am feeling a lot better -- and the psychological effect of knowing your heart ISN'T about to explode is quite a relief, believe you me, but I've also been taking it kind of easy, and since hunching over a computer keyboard for extended periods only seemed to exacerbate the problem meant October was pretty much lost as posts withered and died, including a contribution to the latest Italian Horror Blogathon, and Hallowe'en memes were left unanswered. 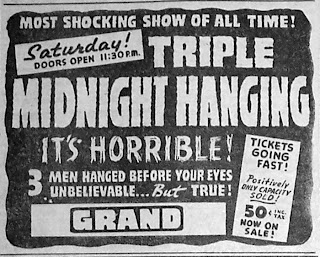 I still managed to post a bunch of Horror and Midnight Spookshow ads at the Morgue, and I encourage you to check those out, along with several articles on the nation's reaction to Orson Welles' War of the Worlds broadcast of 1938. Beyond that, I will keep on keeping on, knocking on wood, and hope my guts don't try to kill me again. And hopefully, these sporadic posts will become a little less sporadic if things keep improving -- knock on Tobanga. With that out of the way, we'll let the Rosedales put a cap on both the infarction episode and the Hallowe'en season and play us out...

Video courtesy of  pwclaeys.
Posted by W.B. Kelso at 2:00 AM

Glad you're still with us, Kemosabe.

Good to be here.