A Beer-Gut Reaction :: Lost along The Hallelujah Trail (1965) 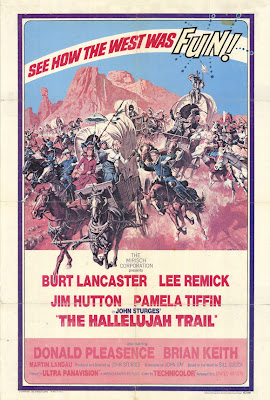 We open in the wild, wild west in the late 1800's. And since Mother Nature is giving all the signs that a harsh winter is fast approaching, in the little mining town of Denver, Colorado, the local miner's association is in a state of panic. Somehow, everyone forgot to restock their liquor supplies, and since spending a long cold winter in seclusion, completely sober, is a prospect these prospectors don't want any part of, a decision is made to consult Oracle Jones (Pleasance), famed trail guide, prophet, and clairvoyant -- and complete nut-job, whose visions get clearer and more accurate the more blitzed he is! Then, as the desperate miners keep pouring him shots of precious whiskey, the answer comes to him: they should all pitch in for one last big shipment of liquor before the snow starts flying. 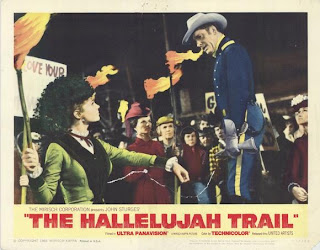 With so little time before the snow starts flying, the miners sign a contract with Frank Wellingham (Keith) to bring 40 wagons full of liquor and booze over from Kansas. And being "a tax payer and a good Republican," Wellingham demands an army escort to protect his cargo. Which he gets when Colonel Thaddeus Gearhart (Lancaster) sends Captain Slater (Hutton) and a detachment of cavalry to protect said wagon train. Now. This command decision will not only keep the philandering Slater away from Gearhart's daughter, Louise (Tiffin), it will also allow the Colonel to stay behind and protect his fort from the Women's Temperance Movement. Led by the fiery Cora Massingale (Remick), who gets wind of the shipment, she then uses her feminine wiles, and portable bathtub, on the hard-drinking Gearhart, and, soon enough, with the Colonel in tow, she leads her band of prohibitionist women out onto the prairie to intercept the booze-train and destroy it. Also getting wind of this shipment are several local Indian tribes, and, led by Chief Five Barrels (Wilke), and his main stooge, Walks Stooped-Over (Landau!), they make plans to intercept the "crazy water" for themselves. Meanwhile, out on the prairie, the ill-tempered Wellingham is having trouble with the stubborn Irish teamsters he's hired to drive his wagons. And in Denver, with no word from the now long overdue wagon train, the miners form the Free Denver Militia and set out to find their investment and help escort it home or face a long and cold winter with no booze. 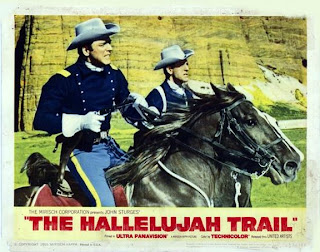 So, to sum up, we have the whiskey shipment slowly heading west, stalled by labor negotiations; the miners heading east; the cavalry and the Temperance Movement heading north; and the Indians moving south; all on a direct collision course. And if this all seems confusing, don't worry; the film provides a narrator and a handy map to help keep track of who's where and what's going on. And when those disparate parties inevitably/finally crash into each other, mayhem will most assuredly ensue...

...You know? This is all Stanley Kramer's fault. When the famed director, known mostly for his social and morality plays, decided he wanted to make a comedy, he decided to make the comedy to end all comedies, It's a Mad, Mad, Mad, Mad World. Now, I love that movie, and find it absolutely hilarious, but I'll also admit that it's not a very good movie. Good or bad, it also ushered in a new type of comedy where the misconception that bigger and louder and more spectacular equals more funny. Kramer was lucky that his film was buoyed by a cast of great comedians that kept the film, despite the constant threat of implosion, chugging right along. Other productions weren't as lucky. 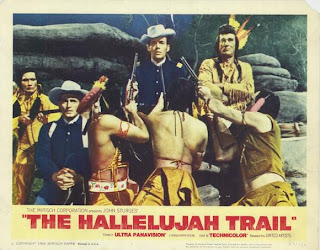 Originally, The Hallelujah Trail was supposed to be just another run of the mill western. But at the time of its production, all the major studios were doing their dangdest to get people's butts back in the theater seats and away from their TV sets. One of these new innovations was Cinerama (-- kind of a proto-Imax experience), and with this new format to exploit, the studios made a big push for all-star blockbusters, which is why The Hallelujah Trail was soon tagged for an upgrade. Based on a book, a comedy of the same name, by William Gullick, the director assigned to the project, John Sturges, like Kramer, was better known for a different kind of film: action movies, like The Magnificent Seven and The Great Escape, or hard-fisted dramas like Bad Day at Black Rock, which have there funny moments but definitely aren't comedies. No one can match up to Kramer's cast, but The Hallelujah Trail's stable of actors are all gamers. Here, Lancaster gets the rare opportunity to show off his comedic side, and has some real and genuine chemistry with Remick. Hutton, the only real comedian in the bunch, is solid. As is Brian Keith; and mention also must be made for the fine troupe of the women in the Temperance Movement. And Landau almost steals the show, but that honor goes to the almost unrecognizable Donald Pleasance as Oracle Jones. (And if you all thought Dr. Loomis was his looniest character, you haven't watched this film yet.) 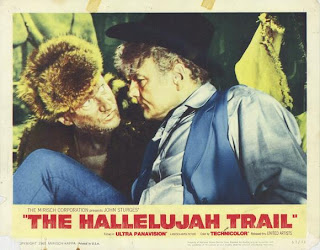 Poking fun at a lot of western clichés and stereotypes, this was a wonderful opportunity for a satire but what it all boils down to in the end is a battle of the sexes. There was a lot of potential for more comedy gold here if the film had dug just a little deeper. All the bits with the Indians are hilarious but the movie plays it safe, hoping all the zany antics of its players will be enough. I don't know about the rest of you, but zany antics, unless we're talking about the Stooges, are rarely funny and grow tedious pretty dang quick. And at a whopping 165-minutes, The Hallelujah Trail amplifies the zaniness with more action and bigger stunts as it goes barreling for the climax when all the parties converge at Whiskey Hills, where a freak sandstorm cuts the visibility down to nothing. In the ensuing confusion, everyone intermingles, shots are fired, and the Battle of Whiskey Hills commences as everyone "circles the wagons" and blindly returns fire. And when the storm ends, the films best gag is revealed: the camps are barely yards apart and miraculously (-- except for a little buckshot in a few select behinds), with all that shooting, no one got hurt. After an uneasy truce is struck, despite a little trouble with the Indian interpreter, all the factions have a palaver, officiated by Gearheart. Of course, everyone wants the whiskey: Massingale wants to destroy it; the miners and the Indians want to drink it; and Wellingham just wants to get paid. 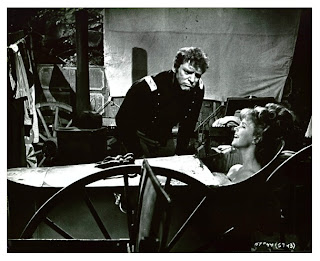 Hearing all sides, while Gearheart ponders on what to do (and the romance between he and Massingale is cemented over a bottle), the Women's Temperance Movement holds a pow-wow with Five Barrels and gets his entire tribe to sign a sobriety pledge. Meanwhile, Wellingham conspires with Oracle to sneak the whiskey shipment away through the treacherous Quicksand Bottoms. Seems Oracle has staked out a trail through the sinkholes with the shreds of his long johns (-- meaning underneath that buffalo coat, Donald Pleasance is buck-ass naked!) But the celebration at the Indian camp was all a ruse as Five Barrels takes the women hostage to hold as ransom for the booze and will only exchange them one at a time: one woman for one whiskey wagon. Since Wellingham could care less about Massingale, he takes the first few wagons into the swamp. What he doesn't realize is that the ladies were on to their scheme, moved Oracle's markers, and soon Wellingham's wagons sinks out of sight. Well, so much for that idea. 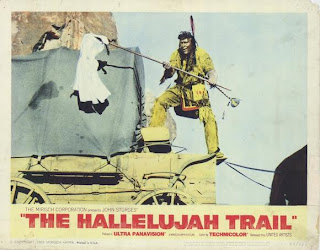 Okay, then. There's an apocryphal story that Stanley Kramer was under much stress about the ending of It's a Mad, Mad, Mad, Mad World. With all that build up, when all those comedians wound up in that building, he honestly had no real idea on how get them back down and feared his movie would end with a resounding thud. Two years later, Sturges was faced with the same conundrum. So how did he end it? The same way Kramer did; with a bunch of outlandish stunts and special-effects as the rest of the whiskey wagons are lined up for the exchange. Here, Massingale is informed that several of the wagons are filled with hot champagne that is ready to pop at the slightest jolt. And so, during each exchange, when a brave takes a wagon, she gives the horses a jab with a hairpin. When the horses bolt, the champagne explodes, and soon the cavalry is chasing a runaway wagon train of Indians -- who are more interested in drinking the cargo than fighting -- until the chaos ends when the Indians ironically and inadvertently circle the wagons, allowing the soldiers to catch up and attack until Five Barrels surrenders. 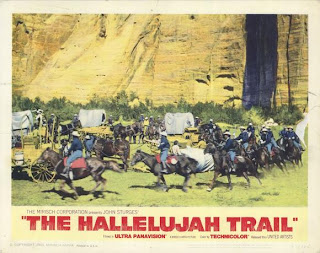 With all the whiskey destroyed or consumed during the mayhem, after the miners slouch back to Denver, and the Indians ride off their hangovers back to the reservation, there's a double wedding in store for Gearhart and Massingale and Slater and Louise. As for Wellingham and Oracle Jones, they're patiently waiting around to retrieve whatever Quicksand Bottoms belches up. And there you have it. *whew* We made it. 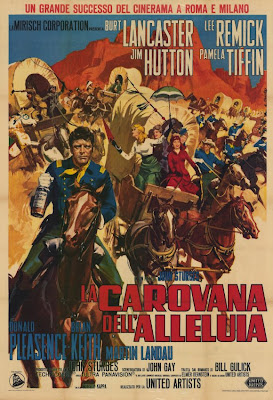 While Kramer's movie overachieves thanks to its cast, Sturges' movie overcompensates with likable characters, spectacular stunts, gorgeous cinematography, and a goofy charm that wins you over. Barely. If The Hallelujah Trail has one weakness, it is the monumental running time. Even though the stunts comes fast and furious, and are pretty spectacular -- Sturges definitely knows his stuff -- the comedy is stretched pretty damned thin by the end. It's amazing, really, when great directors who really don't understand comedy, or think they do, try to make one. Kramer and Sturges can be funny, and have genuinely hilarious moments in their more serious films, but wind up with monstrous humor hemorrhages when they set out to make an actual comedy. A lot of it can be blamed on thin premises that are stretched well past critical mass. Other directors have failed in this same spectacular manner. More contemporary examples include Spielberg and Lucas. They can be funny, too, but their blockbuster comedies, 1941, Howard the Duck and Radioland Murders, even though I love 'em, and will defend at least two of them, were out of control duds at the box office. (So if you think all this style over substance stuff is a new plague on filmdom, brush up on your cinema history, kids.) With just enough gas to make it to the end, my advice on making it through The Hallelujah Trail is to put it on cruise control, try to keep up with Oracle Jones on the booze intake, and take full advantage of the film's built-in intermission, then kick back and enjoy the wackiness. 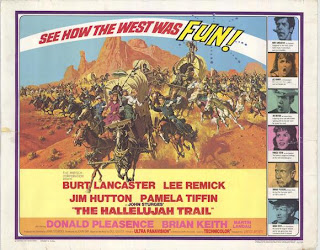