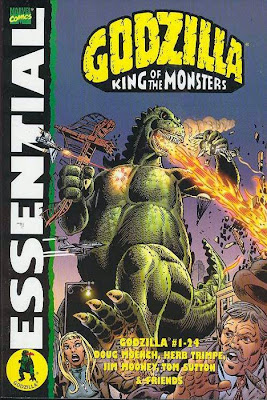 "For two years Japan's greatest export was one of Marvel's biggest stars, and the King of the Monsters upheld his title against some of the best and the worst the House of Ideas had to offer."

People might look at you a little cock-eyed when asked if they can remember the time when Godzilla fought the Fantastic Four -- right before he butted heads with the Mighty Avengers. But it did happen. Or how about that time he took on Bigfoot? Yes, that really happened, too -- and they all occurred within the certifiably insane pages of Marvel Comics 24-issue run of Godzilla: King of the Monsters. 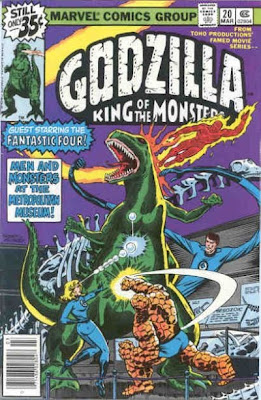 The late 1970's saw a surge of toy-based comic books and I'm not sure if Marvel back-doored into the rights for the character through Mattel, who also produced the American line of Shogun Warriors (-- also adapted into a comic), which contained an awesome Godzilla toy with a spring-loaded fist that I spent many an afternoon using to knock Evel Knievel off of his Stunt Cycle. Regardless, it was a good run, and now, thanks to Marvel's Essential line -- phone book style B&W reprints -- they've all been collected together at a very reasonable price for you to enjoy for the first time or, like me, all over again! 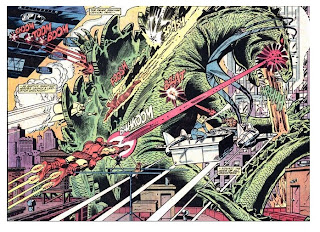 Wasting little time, writer Doug Moench gets the ball rolling when Godzilla surfaces and stomps into Alaska (-- making this his second visit to American soil; the first, 'natch, being when he pulverized the U.N. Building in Destroy All Monsters). And from there, the monster heads south, southeast, making an erratic course for New York, leaving cities like Seattle, San Francisco and Las Vegas in ruin behind him. And to bring all of that to life, editor Archie Goodwin turned to the hard and bold lines of artist Herb Trimpe -- who was definitely getting his King Kirby on in this thing with his layouts and forced perspective shots to establish the monster's size. Known mostly for his work drawing Marvel's other, rampaging green-skinned monster (-- and when inked by Jon Severin, was the best rendition of old Jade-Jaws ever!), Trimpe's distinctively blunt style and constantly morphing main monster might turn some folks off, but I think its great and his creature designs on the myriad of otherworldly monsters our hero gets to fight are something to behold and celebrated. 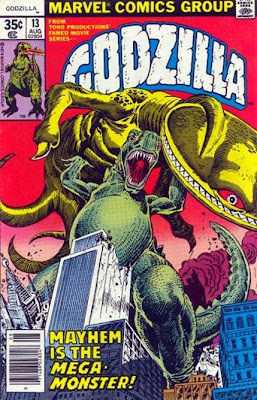 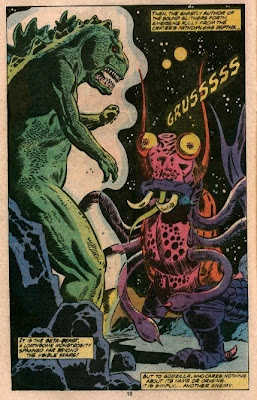 Also, one of the book's strongest assets was that not only did it allow Godzilla to fight his way through the Marvel Universe's gallery of super-heroes, including those already mentioned plus the likes of The Champions and Devil Dinosaur, it was also a showcase for the long dormant Agents of S.H.I.E.L.D. 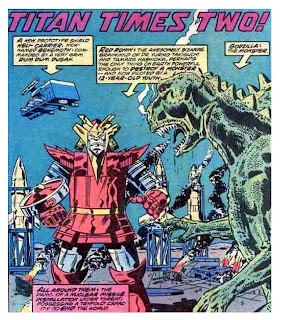 Charged with bringing the monster down, the hi-tech counter-terrorism unit definitely have their hands full and Trimpe's designs for all their advanced tech, atomic-gizmos, and hardware are spiffy-cool, including the giant robot, Red Ronin, built specifically to stop Godzilla. (But one has to wonder how in the hell Dum Dum Dugan keeps that ever present stogie in his constantly yapping mouth.) 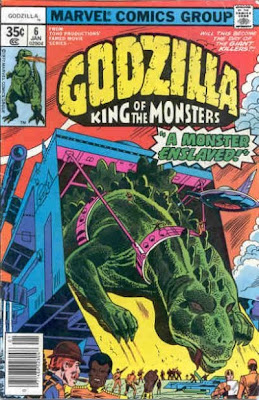 Admittedly, the book is more than a little grounded in the decade that spawned it, but if you can get past that, and one really annoying Kenny character, the book is one helluva demented good time. And while were speaking of toys adapted into comics, am I the only one who thinks Marvel really needs to get Rom: Spaceknight and The Micronauts an Essentials run, too? 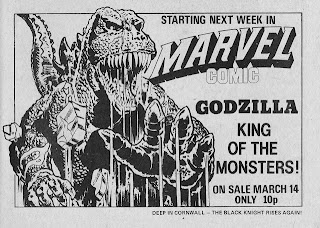