Outfoxing the Fox :: A Beer-Gut Reaction to Billy Wilder's Five Graves to Cairo (1943) 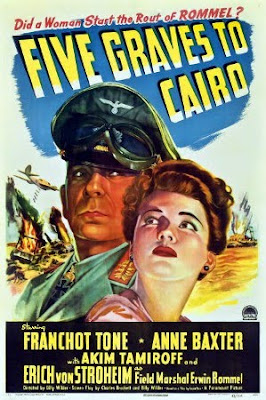 Billy Wilder's Five Graves to Cairo kicks off with the British 8th Army on the run with the German Afrika Corps hot on their heels. And after the fall of Tobruk, the film proper begins with the surreal sight of a lone, crippled British tank rocking its way through the seemingly endless sand dunes. The entire crew is dead, save for Cpl. John Bramble (Tone), who, barely alive after sucking on exhaust fumes for who knows how long, manages to crawl his way out of this runaway death-trap. Lost and delirious, he eventually stumbles into the small town of Sidi Halfaya, where he finds refuge in the local hotel, run by an oafish Egyptian, Farid (Akim Tamifoff), who employs a French chambermaid named Mouche (Baxter); the last member of his staff who hasn't run off or been killed in the latest air-raid. 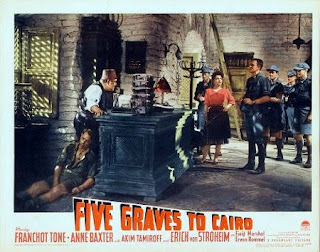 Unfortunately, the hotel is now in occupied territory and has been pegged to be the new command center of the Desert Fox himself, Field Marshall Erwin Rommel (Von Stroheim). Luckily for Bramble, he is able to assume the identity of Davos, the recently deceased club-footed waiter, before he is discovered. But, this luck has a fine razor's edge to it. Turns out this Davos was a German mole who spied on the British while they occupied the hotel. So, while this allows the fake Davos to be trusted to move freely amongst the enemy, he is also expected to know things he possibly couldn't and must carefully bluff his way through several dicey conversations. And as he traverses this precarious, razor-wire tightrope, with some reluctant help from Mouche, who has her own agenda to work with the Germans, Bramble keeps his eyes and ears open, with a hope to find some vital detail to unravel the enigma of the "Five Graves" that will hopefully derail Rommel's march to Cairo and the eventual seizure of the Suez Canal. For if that falls into the Reich's clutches, says Herr Rommel, then Churchill will be forced to take that "big fat cigar out of his mouth and say 'Heil Hitler.'" 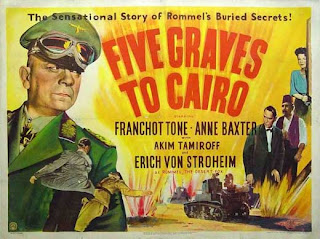 After the box-office success of The Major and the Minor, Wilder's first American film, the brass at Paramount allowed the director and his screenwriter, Brackett, to pick and produce their own follow up. Five Graves to Cairo was the result, and this was actually the third film adaptation of Lajos Biró's play, Hotel Imperial. Here, the action is shifted from the first to second World War, and from the Russian front to the deserts of North Africa. Originally, Wilder wanted Cary Grant and Ingrid Bergman for his leads, but even though they proved untenable, Tone and Baxter do just fine as the bickering protagonists that are hamstrung by some sexual tension as they pursue their own ends. Wilder did get his first choice for Rommel, and allowed Von Stroheim to run wild with the character's wardrobe and accouterments. 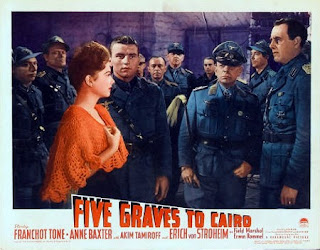 Behind the camera, Wilder and cinematographer John F. Sietz turned the lights down low and kept them there, giving things a nice, noirish flare as characters slink around in the shadows and the dark. On screen, the espionage and intrigue are taut and suspenseful as Bramble frenetically and barely stays one [club-footed] step ahead of the Germans. And if I have one beef with the film, and it's a minor one, is that the overt comedy elements, supplied mostly by the buffoonish Farid, don't really gel all that well with, and distract from, the overall tone of the film. 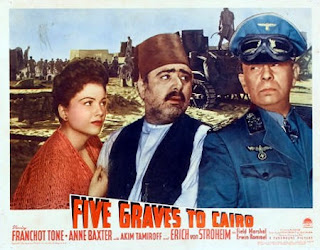 The film was released in 1943, not long after the British stopped Rommel cold at El Alamein. History shows that the good guys would eventually win the day, and they win the day in Five Graves to Cairo, too, but not without a great cost. And as the story goes, looking back on it several years later, Brackett bemoaned the fact that the film had "the dreadful smell of propaganda" to it. Eh, I think that sells the film way short. Yes, there are a few spotlight speeches on why we fight, but I think those scenes only add pressure to the proceedings. This was 1943, remember, and despite the recent victories, the war was still far from over, and who would be the eventual victors was still very much in doubt. 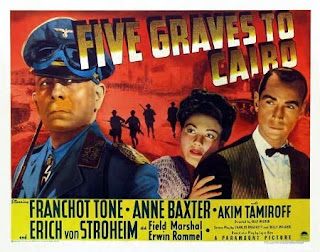 damn, did you know the new york time's nobel prize winning columnist, paul krugman, is linking to you?

No. Consider me boggled of mind. Can you elaborate? From where and to what purpose?

I wish Paul Krugman was reading my blog...
http://krugman.blogs.nytimes.com/2011/01/11/geography-lessons/

Just for a humorous reference to the quote "There's no Y in Egypt."

Here's the link to Krugman's blog that links to this:

To keep his readers on their toes -- see his post on spelling and geography lessons.

@WB: from his daily blog at the Times
http://krugman.blogs.nytimes.com/
and as part of a bon mot.

He was talking about the European countries trying to justify one another in not being the next crises as their debt crises spreads. "No B in Belgium next thing they'll be telling us is no Y in Egypt!"

Wow. Thanks, everybody. That's gotta be some kind of record for comments.