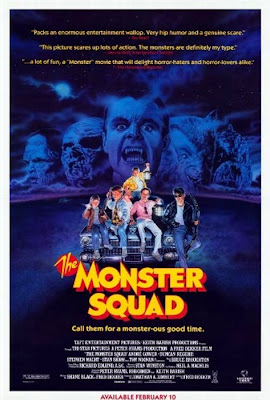 Like, a bajillion years ago, the great Dr. Abraham Van Helsing blew a golden opportunity to banish the evil Count Dracula and his ilk to an eternity in limbo. Now, his diary and "How to Guide" has fallen into the hands of the only people who realize the cycle of evil is about to start again; as once more the most famous monsters of filmland have been resurrected and reunited to subjugate humanity, and mankind's only hope of salvation is a group of tweeners in desperate need of a virgin.

Now there might be some of you, like me, who remember a short-lived TV show from the 1970's starring a pre-Love Boat Fred Grandy, where Gopher -- sorry, Grandy, was a computer whiz who accidentally brings to life the wax displays of our favorite movie monsters, and together, they fought crime. But today we’re talking about the other Monster Squad. 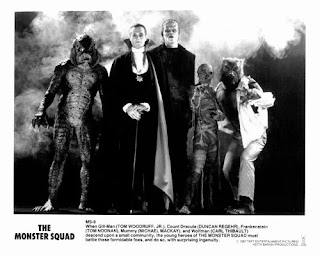 Here, it all begins with a bizarre rash of crimes, including a stolen mummy from the local museum, two missing shipping crates that were lost under suspicious circumstances while en route from Transylvania, and the body of some frothing lunatic who claimed to be a werewolf that disappeared from the county morgue. And while his police detective father blames the full moon and the usual lunacy it brings, his son, Sean, knows better. You see, Sean (Gower) and his buddies are members of a Movie Monster Appreciation Society; and when his mom gives him a book auctioned off at an old estate that was written by some guy named Van Helsing (-- the guy who fought Godzilla, thought Mom when she bought it), and now some guy named Alucard is wanting to buy it back, Sean manages to convince his friends, Patrick (Kiger), Fat Kid (Chalen), and newest member Rudy (Lambert), that the monsters are real, present, and presently killing people. 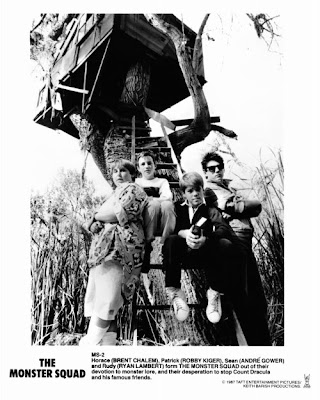 Then, with the help of the neighborly Scary German Guy (Cimino), our young heroes manage to translate the diary, which reveals how to banish the monsters forever. With that, preparations are made as silverware is pilfered for bullets, wooden stakes are made ready, and an urgent message, in crayon, is sent off to the army for help. However, their biggest obstacle is convincing Patrick's older sister, an alleged virgin, and a vital ingredient for the spell, into helping them with the proper incantation. Well, that and retrieving a mystical amulet from the monsters that's needed to rip open the dimensional doorway. But in the end, it’s Sean's little sister, Phoebe (Bank), who steals the movie and saves their collective hash. She’s the one who befriends Frankenstein’s monster, gets him to switch sides, and then bails them all out in the end by taking up the incantation when their first choice doesn't ... well, count. 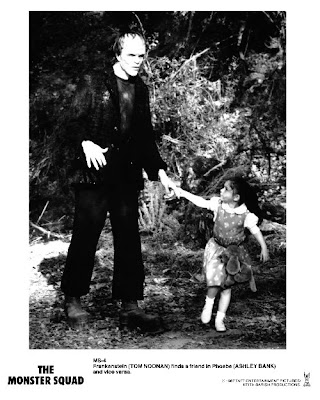 Directed by Fred Dekker, who earlier gave us another cult classic with Night of the Creeps, he also co-scripted the film with Shane Black, most famous for scripting all four Lethal Weapon films. (Wait a second ... Written by Black-n-Dekker?) Together, their film hammers most of the notes right on the head and it makes for a wonderful homage. Now, there are some tonal inconsistencies, where it couldn't quite settle between the comedy and horror elements, be it serious or juvenile spoof, that don't quite jive in spots. But, eh, their cast and characters allows us to gloss over this rather easily. Credit to Ben Edlund and Stan Winston for the F/X and creature designs. They did have to tweak them a little to avoid Universal's rabid trademark lawyers, but we know exactly who we're looking at. And lets not forget the folks inside those costumes who brought these monsters to life: Tom Noonan (The Monster); Michael MacKay (The Mummy); Tom Woodruff (The Creature); and Carl Thibault as the Wolfman. 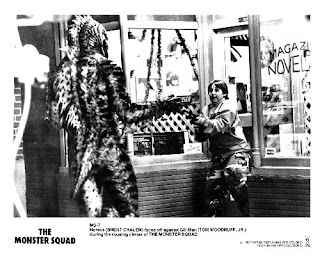 And no, I didn't forget Duncan Regehr's portrayal of Dracula. Hands down, Regehr, fresh off the bare-chested butt-steak role of Charles in V: The Series, provides, I think, one of the best cinematic interpretation of the dastardly blood-sucking Count of Yore. Cold, calculating and brutally ruthless, there is no hint of lame and lamentable lost loves, here. And being from the same decade that spawned Ann Ricepires and the misunderstood emo-vamps that followed, Regehr brings some much needed menace and weight to the breed that is sorely lacking these days. Yeah, that's The Monster Squad in a nutshell. Or nut-shot, for the lycanthropically challenged. And before I go, I'll leave you with this totally awesome but absurdly inappropriate Italian Locandina for our film in question.

Seriously. What the hell?

This is one of the greatest movies, it has stood the test of time to still be a very good cheeseless film. Some are a let down to go back and watch, but this one is still refreshing.

Again, the only thing that struck me when revisiting it was the abrupt tonal switches between sheer terror and juvenile buffonery that tended to contradict each other.

Thanks for commenting. Appreciate it.