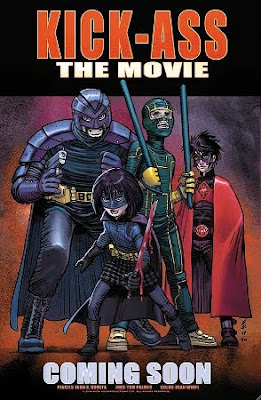 "Happily, they took out almost everything that Millar brought to the project and replaced it with characters, dialogue and situations that don't make you hate the actors and the movie. I thought it was a quite-good-but-not-great comedic action film with occasional pathos, a pretty well-considered parody of superhero movies and the fanboy mindset, and a joyously profane middle finger extended to the Guardians of Morality in America for the film's entire length.
"And they even played the Dickies' cover of the Banana Splits theme when an eleven year old girl kills everyone in the room, which warmed my evil little heart. I hope they make a lot of money off the soundtrack."
-- Tim 'Alchemist of Pop' Lehnerer
Hmmmm ... May just have to see this thing after all.
Posted by W.B. Kelso at 3:11 AM

Anyways, I took time off from lickin' your dad's dick (--and by the way, he says you suck it better) and pulled my own out from your mom (-- who tells me she's serving the papers as I type this up, which means you'll soon get to call me Daddy, ya cute little anonymous bastard, you) and went and saw the movie.

Loved it. It had me at hello, and full nerdgasm was reached during the bat-shit insane climax to the tune of Elvis Futher-Mucking Presley singing "The Battle Hymn of the Republic."

And with that little tirade out of the way, I will officially be switching over to secured commenting. I'm kinda hard up for comments, sure, but not this hard up.