"It's depressing that the words 'secret agent'
have become synonymous with 'sex maniac.'"xxxxxxxxxxxxxxxxxx-- Bond ... James Bond

When the casual James Bond enthusiasts list their least favorite 007 films, what you usually find lurking at the bottom are the same usual suspects; but they'll range in a different pecking order depending on personal tastes and favorite Bonds. Yeah, Roger Moore probably stuck around for about two films too many. And after Goldeneye, Pierce Brosnan's run quickly floundered and then foundered on its own F/X budget. Toiling at the bottom of most lists is usually poor Timothy Dalton's run, which, for the record, I don't truck; or On Her Majesty's Secret Service -- which I believe is actually one of the better films in the whole franchise; it was just saddled with that stiff, George Lazenby, thus branding it the red-headed stepchild of the bunch. And if OHMSS is the red-headed stepchild of the Bond franchise, then the original Casino Royale is the crazy drunken aunt, with the purple hair, who always wants a big, wet sloppy kiss at Christmas time. Gah! You can't avoid it, yes, but no family reunion would be complete without it. 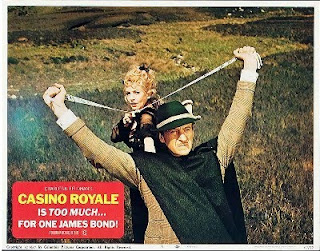 Casino Royale was actually the first James Bond adventure published by author Ian Fleming back in 1953, and it was also the first to be adapted for the visual medium in 1954. Whoa. Wait, you ask, 1954? Yeah. See, when TV producer Gregory Ratoff bought the rights for it he decided to adapt it for the showcase anthology series Climax! Mystery Theater on CBS. E'yup. That's right: Barry Nelson and his Marine buzzcut was the first person to ever portray James "Jimmy" Bond. After that, the rights to the novel swapped hands several times over the next decade until they landed in producer Charles Feldmen's lap. And taking a cue from the immense (and repeating) box-office success of Harry Saltzman's and Albert Broccoli's adaptations of Fleming's other books for United Artists, Feldmen immediately launched plans to film Casino Royale for Columbia to cash in. 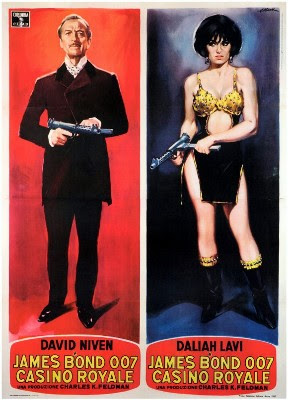 Initially wanting to co-produce a feature with Team EON, starring Connery, Feldmen was rebuffed. (Seems Saltzman and Broccoli weren't too thrilled with their previous joint production with Kevin McClory on Thunderball.) So, like what McClory did much later with Never Say Never Again, Feldmen decided to produce his own version (-- though unlike McClory, Feldmen could not coax Connery into starring in his vehicle). And deciding he probably couldn't out-Bond his competitors, the decision was made to skip the serious espionage business and instead go mod and poke his competitors in the eye with a satirical perforation of all those brand new spy conventions. The results were, well -- judge for yourself: 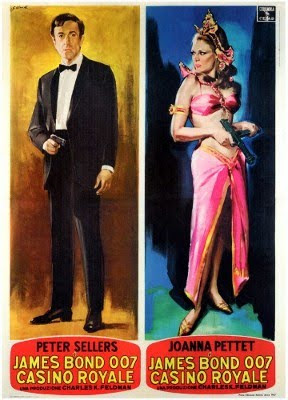 When the international consortium of evil known as SMERSH starts eliminating the world's top secret agents, James Bond (Niven) is called out of retirement to stem the tide. To assist him, several other fake Bonds are employed to distract and infiltrate SMERSH, including ones played by Peter Sellers, Ursula Andress, and Daliah Lavi, and help restore world order by foiling the vertically challenged Dr. Noah (Allen) and his insidious scheme to reduce the height of the entire male population of the planet to under four-feet tall. And then things get a little strange. Make that spiral out of control -- and was that Frankenstein's Monster who just clomped by? 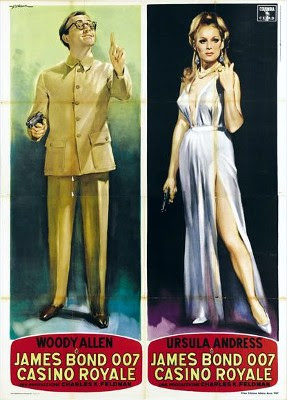 Whenever I think about this movie, I clearly recall one line from Niven when asked by an associate about their next course of action, to which he replies "Get out of the bloody place before it blows up!" As a viewer, you get the exact same impression with Casino Royale as it slowly reaches critical mass. But what else would you expect from a film that took five directors, including John Huston and (-- the uncredited clean-up specialist --) Val Guest, ten scriptwriters, and a cast that includes not only Niven, Sellers, and Allen, but Orson Welles, William Holden and, Was that Peter O'Toole? That right: you'd expect a cinematic train-wreck, and that's exactly what Casino Royale most definitely is. 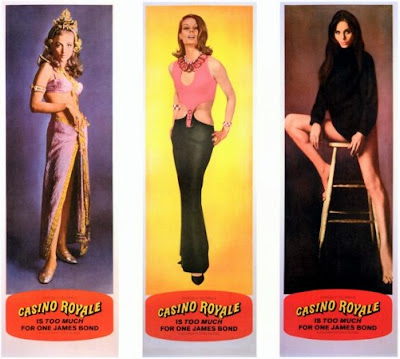 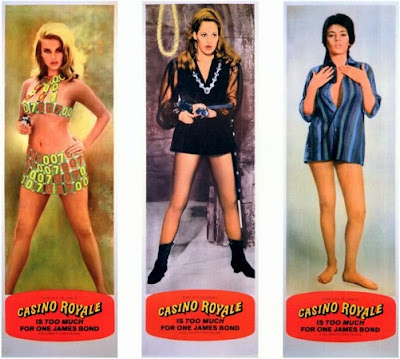 But with that kind of talent involved, you'd think the end results would be a little better than they were. Alas, but it seems while the movie was in production it was marred with so many problems and a spiraling budget it was dubbed a mini-Cleopatra -- the high-water benchmark for budget boondoggles until Costner got all wet with Waterworld. Here, things began to fall apart almost immediately when Sellers, whom the film was supposed to center on, and who wasn't too thrilled with the script's direction, proved so difficult that he was fired off the picture. Things were so bad, and Sellers and Welles despised each other so much, that the actors were shot separately then edited together for their memorable game of baccarat. Add it all up and you're amazed this discombobulated mess wound up as coherent as it did! 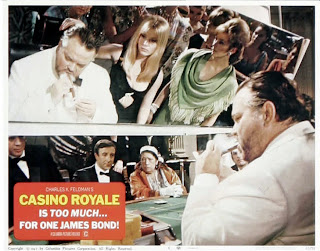 I'm not really sure when the proceedings stopped being silly and became absurd, then ridiculous, then ludicrous, and then -- dare I say it, yes I do -- kinda stupid. It fades badly after the first half hour, and then it's just an assault of peaks and valleys, giving you a bad case of the burpy-urpies before it wildly crescendos at the end -- but you still never quite get the bang you were hoping for. Tallying it up, there's about a four-groan-to-every-laugh ratio in Casino Royale. Those aren't bad odds, making it worth a gamble if you have a high tolerance for camp gone horribly, horribly wrong. There are a few comedy nuggets to be mined, here. Burt Bacharach's hideously infectious soundtrack alone is worth digging for, just don't expect the mother lode or get suckered in by all the comedic pyrite. 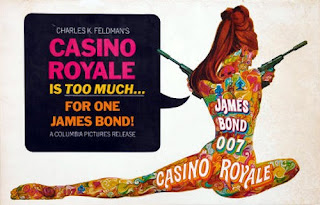