Prime Cuts :: Clearing Out the Amazon Instant Que :: Around the World and through the Portals of Time with Herc and Sons! 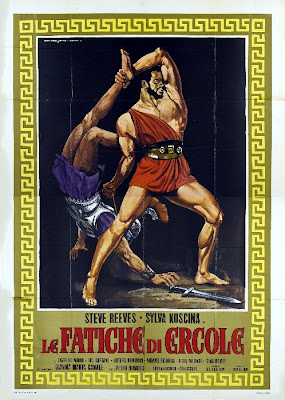 "Filmmaking in Europe was a little different from working in the United States. There's a scene in Hercules where I'm in chains -- they looked like steel, but they were actually made of wood -- and I had to swing these chains at my supposed enemies who were advancing towards me. Well, I didn't want to really strike someone so I kind of held back with my motions. The director (Pietro Francisci) yelled, 'Swing those chains! Swing them hard!' I said, 'I don't want to hurt someone.' And the director yelled back, 'If they don't get hurt, they don't get paid!"


After trying to recreate some forgotten Labor of Hercules last week, I totally pretzel'd my back and spent two whole days convalescing in my trusty recliner while my thoracolumbar fascia and my gluteal aponeurosis stitched themselves back together. And sticking with the theme, trapped and thus, I started plumbing the depths of Amazon Prime's free-streaming catalog and unearthed a whole shitload of Italian imported Hercules flicks and assorted knock-offs. 20 such films in a 36 hour period do have an effect, believe me, but all are a demented good time as Herc and his sons, Maciste, Ursus, et al, or Goliath and Ulysses butted heads, chucked around some Styrofoam scenery, and did battle against some dastardly villains and sadistic despots with penchants for human sacrifice, and put fist to some go-motion monsters who often times exceeded the limitations of their budgets into something somewhere between ineptly inspiring to monumentally stoopid. Most of them are kinda of blur, and a lot of plots have permanently melded together into an intractable morass, but a few stand out. 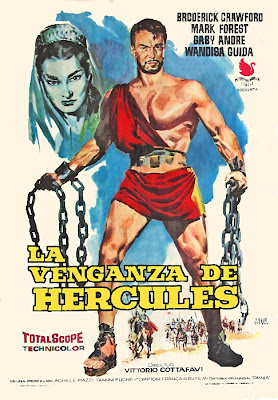 I remember an initial but ultimately failed attempt to watch them in order -- or at least chronologically, and after polishing off Hercules and Hercules Unchained came Goliath and the Dragon (La Vendetta di Ercole), which sported a couple of those fantastic go-motion monsters (-- meaning nothing more than a giant, glorified puppet in most cases -- though one particular three-headed puppet doubled as a flame-thrower. However, the titular dragon split time between the same and fairly well-executed stop-motion surrogate; there's also a pretty nifty practical-F/X'd centaur.) Here, after Steve Reeves moved on to do The Giant of Marathon, Mark Forest, a near, dead-ringer for Reeves, stepped in quite admirably as "Goliath" for this American International import (-- hence the name change from The Revenge of Hercules.) And just when I thought I'd seen everything, the film concludes with Broderick Crawford wrestling a giant rubber snake to the death -- and losing. A-mazing. 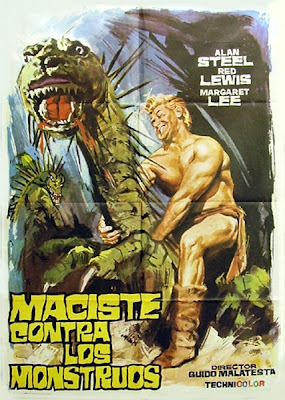 But after that, I kinda just took them as Amazon regurgitated them during my title searches, with the vast majority being part of Embassy pictures syndicated series, The Sons of Hercules, where about 16 or so imports were directly packaged for TV, complete with a connecting, Gilligan's Island-esque theme ballad to link them together:

Fire Monsters Against the Sons of Hercules (Maciste Contra Los Monstrous) is one such tube-of-boob flick, where our hero, Maxus, played by Reg Lewis, kinda looks like the end-result of some dubious Reb Brown and Arch Hall Jr. gene-splicing experiment. Anyhoo, this tale of rivaling tribes exchanging massacres is a proto-riff on Skeeter Davis' One Tin Soldier aptly augmented by some more of those nifty sock-puppet monsters. Alas, the fire-breathing hydra promised by the blurb never showed but Ghidrah's underwater cousin more than made up for it.

And then things got a little weird as our musclebound mortal started bouncing around the time-stream and winding up in the damnedest of places. In Goliath and the Masked Rider (Golia e il Cavaliere Mascherato), our hero (Alan Steel this time) winds up in what appears to be 18th century Spain, serving as the strongman for a troop of gypsies, who wind up embroiled in the evil Don El Stinko's attempt to steal both his neighbor's buxom land and prized daughter. Luckily, there's also a Scarlet Pimpernel wannabe running about, making this, basically, a mash-up of Hercules and The Dancing Cavalier. Nowhere near as entertaining as that sounds, unfortunately, and sorely lacking in the go-motion monster department. 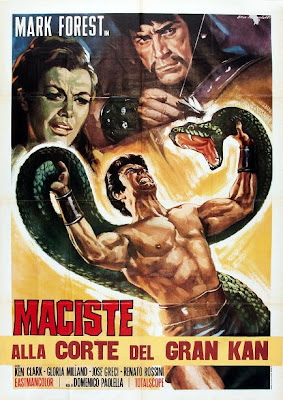 And the inexplicable time-jumping world tour continued with Hercules Against the Barbarians (Maciste Nell'Inferno di Gengis Kahn), where Herc (Forest again) winds up in Poland circa 1240, trying to turn back the Mongol hordes of Genghis Khan. Yeah. That's me shrugging right now. There's also a kidnapped princess, a circus troupe of midgets, and some rubber critter mayhem as Herc must rescue the first by joining the second and fighting off the third. Wow. And THEN he had to fight the renegade sons of Genghis Khan in Hercules Against the Mongols (Maciste Contro i Mongoli). 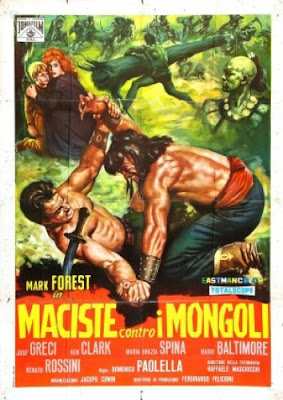 Okay, next, remember when that giant otter and a freak storm drug Hercules all the way to Judea to fight Samson? Well, Herc must of really pissed off Neptune this time because he's been blown even further off course in Hercules Against the Sons of the Sun (Ercole Contro i Figle del Sol) and finds himself marooned in the New World, where he pledges to help restore the rightful heir to the kingdom of the Incas. Now, Herc (still Forest) accomplishes this by basically chucking the Prime Directive out the window and trains his new friends in the fine art of war and catapult and siege-tower construction, leading up to a fairly spectacular final battle for a no-budget wonder like this. All of that plus several extended sacrificial-dance numbers of Ray Dennis Steckler proportions, where highly colorful meets sheer ineptitude, makes this one a keeper. 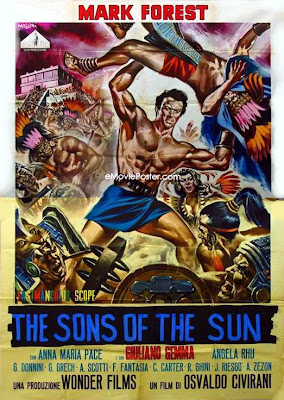 Again, there were a lot more screened: Ulysses Against the Son of Hercules, Beasts of Babylon Against the Son of Hercules, Hercules and the Tyrants of Babylon, The Fury of Hercules, Mole Men vs. the Son of Hercules, Son of Hercules in the Land of Darkness, The Giant of Marathon, Goliath and the Sins of Babylon, The Vengeance of Ursus, Samson and the 7 Miracles of the World, Hercules and the Captive Women and Hercules Against the Moon Men, but all the fighting, and smashing, and massacring, and torturing, and usurping, and rebelling, and goofy-ass musical numbers, and greased pectoral muscles, have me all confused, with the only real way to differentiate flicks was being able to tell which production could afford horses and those who could not. But aside from Hercules and the Masked Rider there wasn't a dud in the bunch no matter how horrid the print was -- and most of them were pretty horrid as the majority of these flicks labor in public domain hell, meaning we may never get to see any of these restored or in there proper aspect ratio. But there are a few out there, and those should be cherished as the rarities they are. Beyond that, this little adventure served to remind me how awesome Steve Reeves is, and showed that Mark Forest was a worthy successor -- though he should have kept the beard. And the only real disappointment of this marathon was that this title wasn't available to stream: 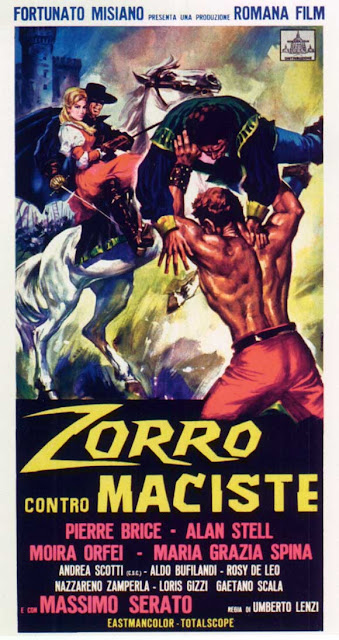