Blogathon Alert :: Whaddaya Call It When You Play Multiple Roles and then Kill Yourselves Onscreen Multiple Times? Well, We're Gonna Find Out!

There's an apocryphal story told by actor Dick Miller about the time Roger Corman hired him as an extra for Apache Woman (1955), where they filmed a scene where he played an Indian fleeing from some pursuing cowboys, and once that shot was completed, Corman told Miller to ditch the wig, wipe off the warpaint, change costumes, and put on a hat for the next shot of the pursuing cowboys, so, essentially, Miller was chasing himself in the same edited scene. Over the years since this story has been embellished on occasions, where Miller also wound up shooting himself as well. Now, this kind of frugal improvising and maximizing resources (and time-space paradoxes) were a trademark of any Corman production, but I don't think he ever improvised more or maximized anyone else as hilariously as he did with Beach Dickerson, another one of his stock-players, in his prehistoric "epic", Teenage Caveman (1958). 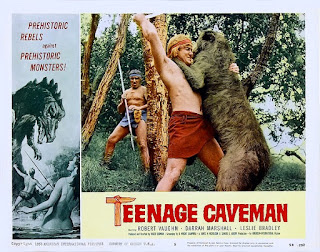 Thus and so, have I got a tale of multiple deaths, multiple resurrections, costume changes, and a dubious incident involving a bear costume for you, Boils and Ghouls, when Christiana Wenher and Silver Screenings launch the Dual Roles Blogathon due to hit in late September. So, stay tuned! 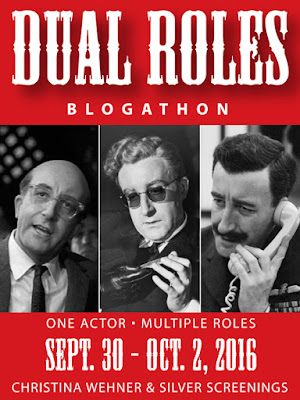 Please tell me someone is going to take on "Kind Hearts and Coronets" ;)

E'yup. Looks like one of the host sites have got it covered.