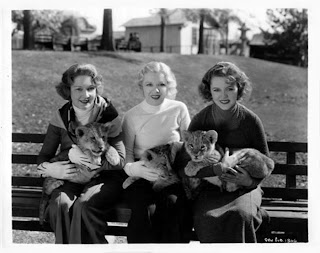 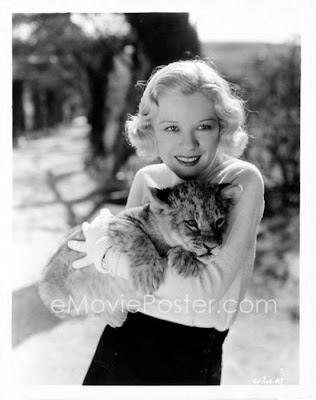 "Some Baby: Glenda Farrell has adopted a baby leopard which accompanies her to the Warner Studio every day where she is filming The Mayor of Hell."

Okay, a couple of things. First, aside from establishing that they were taken in 1933, despite some feverish digging and smiting the Google most verily, I have been unable to unearth the exact circumstances that led to these publicity shots (-- but I hope the comment about the fur coats was way, way off base, I mean, *sheesh*). Second, these photos are so freakin' adorable I can't even even. And lastly, though neither Farrell or Ellis are listed in the credits for The Mayor of Hell, that doesn't mean they weren't in it somewhere. I haven't seen the film so I cannot confirm any kind of cameo or background appearance in this Cagney hard-boiler, but I do know the Warner brass worked the hell out of their stable of actors -- or, it could just be some cooked-up Studio B.S. period. If anyone knows for sure, drop us a message in the comments section. Thanks!

Update: (Information courtesy of Samuel Wilson / Mondo 70: Wild World of Cinema): Looks like we can date those photos more precisely. Film Daily for Jan. 27 1933 lists Farrell as Cagney's co-star for Mayor of Hell. Two weeks later, the Feb. 10 issue names Madge Evans as the co-star. Glenda may have been promoted out of her role, since the same issue reports that she had just signed a long-term contract that meant getting the lead in her next picture.

"Not many actors could talk. So they shoved the ones that came from Broadway into everything. It all went so fast. I used to ask myself, 'What set am I on today? What script am I supposed to be doing -- this one or that one? All I shouted for was a day off. We got it. Sunday. But I had to stay in bed that one day to get ready for the next six days of shooting."


One of the things I am most thankful for from 2012 is getting a crash course on the life and times and film career of Glenda Farrell. And the more I dig, the more I love. And so, to share that love, we're kicking off The Glenda Farrell Project for 2013 and beyond, as I will do everything in my power to share my Glenda love in the usual, obsessive compulsive fashion in all matters and means and ways. Stay tuned! Lots more to come. 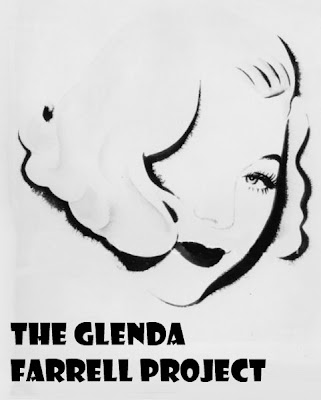 Looks like we can date those photos more precisely. Film Daily for Jan. 27 1933 lists Farrell as Cagney's co-star for Mayor of Hell. Two weeks later, the Feb. 10 issue names Madge Evans as the co-star. Glenda may have been promoted out of her role, since the same issue reports that she had just signed a long-term contract that meant getting the lead in her next picture.

Got this from the Media History Digital Library (mediahistoryproject.org) which should be a big help for further research on Farrell.

Thanks, man! Bookmarking as we speak. I found several great sources, including an online reprint of an exhaustive bio piece from Classic Images. I shall update the post with your info.