In Memoriam :: To the Guy Who Put the Horror in Party Beach... 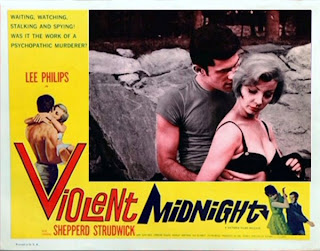 One of the patron saints of gonzoidal independent, regional movie-making, alas, I'm sorry to report that Delbert "Del" Tenney passed away last week. Tenney's filmmaking career began in front of the camera as an extra in Stalag 17 and The Wild One before a move back east found him shifting behind the camera, where he churned out the totally under-appreciated thriller, Violent Midnight, before teaming up with Alan V. Iselin for his most famous double-feature, with those bratwurst bogarting, cross-eyed, pigeon-toed and knock-kneed fish critters running amok in The Horror of Party Beach and his Roger Corman Poe-cycle inspired The Curse of the Living Corpse. All three of which more than make up for his one colossal misfire, Voodoo Bloodbath a/k/a I Eat Your Skin. 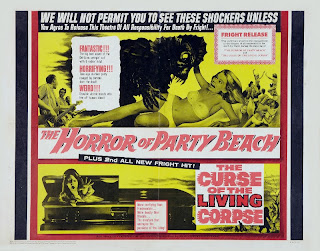 Alas, after that short spurt from 1963-1964, Tenney took what profits he made off of those features and put them into real estate, content to let his film career end there until briefly resurfacing for another Poe tribute, Descendant, back in 2003, which wasn't half bad, making one wonder what else could have happened in the intervening four decades. I for one felt he should have made more, but I'm eternally thankful for what we got. 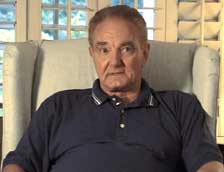 Email ThisBlogThis!Share to TwitterShare to FacebookShare to Pinterest
Labels: Curse of the Living Corpse, Del Tenney, Horror of Party Beach, I Eat Your Skin, In Memoriam, Violent Midnight