Sometimes the Hangover's Worth It :: A Beer-Gut Reaction to Archie Mayo's Moontide (1942) 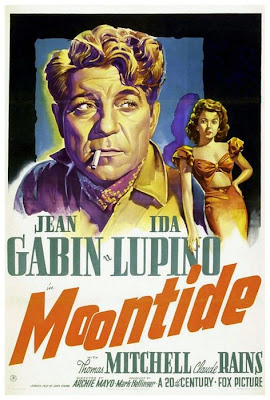 Returning to one of his favorite ports along the California coast, a hard-drinking, free-spirited sailor named Bobo (Gabin) and his mate, Tiny (Mitchell), set anchor and start raising some hell in the local watering holes. Alas, after one particular insane night of debauchery, Bobo gets so blasted he awakens on a stranger's boat wearing somebody else's hat, with no idea how he got there. Worse yet, the hat's owner turns up dead, and, fearing what he might have done during his drunken blackout, Bobo, with Tiny's encouraging, prepares to skip town. 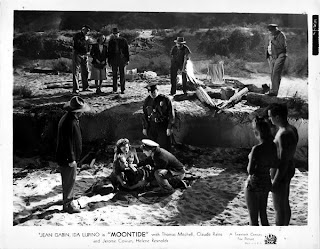 But! This fugitive flight is interrupted when Bobo rescues a girl, Anna (Lupino), who was trying to commit suicide by drowning. Completely smitten with this waif, Bobo decides to stick around, falls in love, and gets married -- much to his old buddy Tiny's annoyance, who tries to sabotage this relationship at every turn. And then things take an even more sinister turn when Anna discovers who the real killer is, making her the next target! 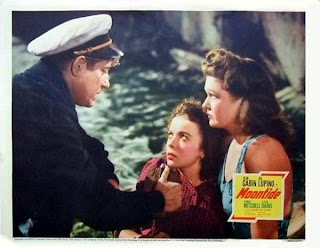 Moontide is a fascinating, proto-film noir whose rocky production and subsequent box-office failure, unfortunately, and unjustly, relegated it to the musty vault of Forgotten Films and the Criminally Overlooked; just a footnote on the failure of Hollywood to import French actor Jean Gabin, who had resisted all Tinseltown overtures until France fell to Germany in 1940. Director Fritz Lang walked away from it during the pre-production phase. Ida Lupino was only in it because Joan Bennett got pregnant and had to bow out. Then, after the Japanese bombed Pearl Harbor, producer Mark Hellinger had to move the entire shoot indoors when location shooting on the docks proved untenable due to National Security risks. 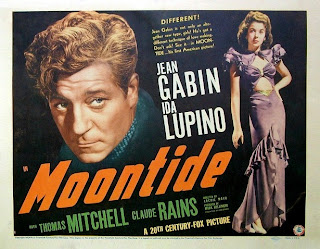 And on top of all that, Joseph Breen, Hollywood’s censor extraordinaire, seemed to take a personal interest in this flick and proceeded to stomp the ever-living hell out of anything that came within six nautical miles of the Hayes Code right out of John O’Hara and Nunnally Johnson’s script. And when you take into account all the murder, mayhem, attempted suicides, raping and, yes, cannibalism in Willard Robinson’s source novel, one can only wonder who thought it was even possible to film the doomed characters of Moontide in the first place. But film it they did, and quite remarkably I might add. 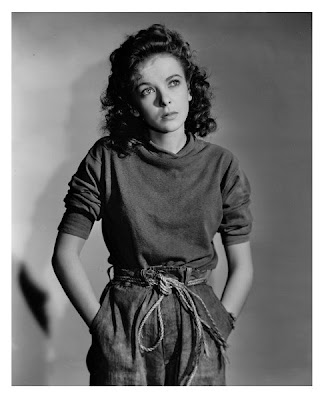 Gabin is great, but Lupino is even better, showing a rare vulnerability. I’m telling ya, she’s so good in this. And both are supported by rock solid, out-of-character turns by beach bum Claude Raines and a murderous Thomas Mitchell. Archie Mayo subs in just fine for Lang, too, with lots of shadows and fog, and a nice assist from Salvador Dali for a drunken, phantasmagorical dream sequence. And the move indoors just adds a surreal, dreamlike quality that makes this thing come off as some kind of a demented fairy tale — complete with a Daryl F. Zanuck mandated happy ending. (For the record, I totally agree with him on this change.) And for every five things Breen squashed, one or two things managed to slip through. 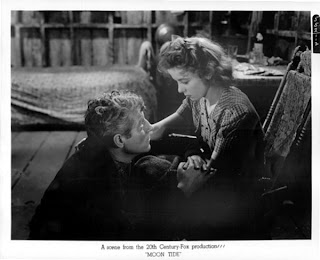 Unfortunately, while dancing around Breen's scissors, Moontide can’t quite get its footing on what it really wants to be: a hard-edged thriller or sudsy melodrama — but, eh, whaddaya gonna do. In the film's defense, it does both genres very well, they just never quite jive properly. And please, don’t let that schizo stuff scare you off or you’re gonna miss a really good movie.

The newspaper ads for Moontide at the Morgue. 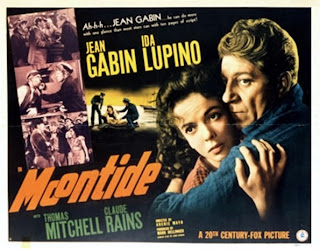