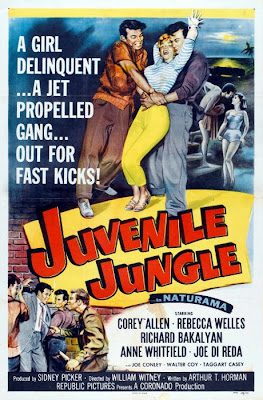 Though not near as hep and entertaining as The Cool and the Crazy, the apex of his juvenile delinquency trilogy from 1958 (-- the final third being the stolen car epic, Young and Wild), William Witney's Juvenile Jungle is still worth a look. Witney had already forever etched his name in Hollywood lore when he teamed up with the likes of Yakima Canutt and the Lydecker Brothers for a ton of barn-burning serials for Republic Pictures (-- Daredevils of the Red Circle [1939], The Adventures of Captain Marvel [1941] and The Crimson Ghost [1946] to name a few); and the director's notions on fight choreography and editing soon leeched there way into the majors. And if that wasn't enough, at the twilight of his career, Witney also gave us the whole six-pack of awesome known as Darktown Strutters (1975). 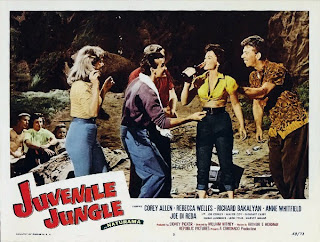 Juvenile Jungle was one of the last pictures the Republic made before the studio went tits up in the late 1950's. The plot is fairly standard: a young, good-looking no-goodnik drifter (Allen) finds himself in a new town, where he woos the lovelorn and luckless waitress of the local greasy spoon (Welles); and, through her, wheedles his way into a gang of toughs (Di Rida, Bakalyan) and convinces them to stop their penny-ante stick-ups for one big score -- knocking off the local liquor store/check-cashing joint by kidnapping and ransoming the owner's daughter. Things get a little convoluted and contrived from there, as our scheming lothario's plan revolves around him first wooing and romancing said victim (-- a kidnapping without a kidnapping, dig?), drawing the jealous ire of his other girlfriend, and the wrath of the rest of the gang, when our boy starts to fall for the perky teenie-bopper and rapidly develops some cold feet... 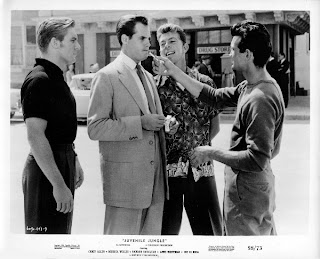 Three things, I think, kick Juvenile Jungle up a couple notches from its standard Switchblade Pack'n, Vitalis Slick Sport'n and Rocket-Bra Clad brethren. First, Horman's script doesn't preach or rail against the loutish behavior of our kooky criminals but plays more like a standard hard-boiled crime drama of that era. Second, the stable of actors, including an extended cameo by the lovely and always welcomed Yvette Vickers (-- and somewhere, Robert Conrad is lurking but I failed to spot him), and anchored by the wily vet Bakalyan, and a strong turn by a pre-The Waltons Joe Conley as their inside man, helps smooth things out considerably when head thug Di Reda threatens to spit the bit and start gnawing on the scenery. Allen and Whitefield are likable as a couple and spark the old chemistry set -- you actually believe this idiot would straighten out for her; but the real star of the show is the spurned Welles, who, when things start to unravel, with nothing left to lose, is the one with the chutzpah to hold it together and push the others through to the bitter end, which brings us to the third thing I really liked and found interesting about this flick. 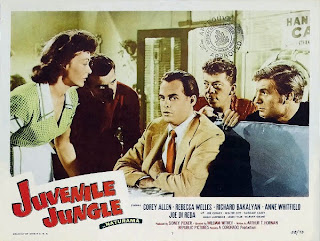 As I said before, Juvenile Jungle is more of a crime drama than a high school safety screed. Pretty pedestrian on the surface, yes, with a few flashes of brilliance, but what really makes this thing work is if you consider Welles' character as our protagonist and not Allen's malcontent with a misunderstood heart of gold. The film's promotional materials really do Welles a disservice, too, branding her as the pied piper out for kicks, who leads those around to her to a tragic end. Wrong. Dead wrong. (And to add insult to injury, all the promotional materials for Juvenile Jungle calling for Welles' head showcase Vickers instead!) Like most characters in these old hard-boilers, Welles is just another working stiff who throws caution to the wind when she falls for the wrong guy -- here, with the genders switched, she becomes prey for a homme fatal -- and buys into his cock-n-bull load about the big score and the easy life it promises. 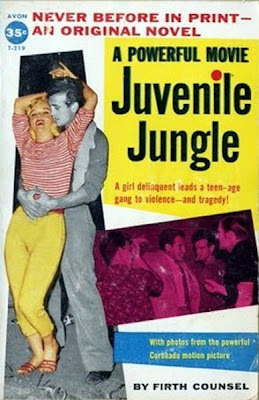 Of course these things never, ever work out. And after she gives it all up for him, emotionally, physically and financially, only to be double-crossed and dumped, with her eyes still firmly on the prize, and, yes, a little biblical payback on her ex-lover as an added bonus, Welles is soon barreling down the road to ruin. And when we reach the inevitable climax, with things falling apart around her, her dreams going up in smoke and bitch-slaps and a tightening police dragnet, Welles is left holding the smoking gun, while the real villain, Allen, who got her into this quagmire in the first place, will, for all intents and purposes, despite his injuries, get the (other) girl of his dreams, his big score by default, and basically gets away with it all. 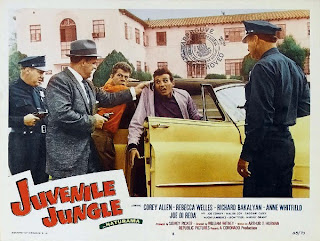 And that, my friends, is some pretty screwed up shit, right there. 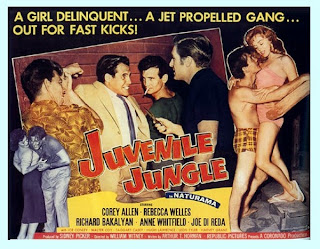 Homme fatal! That's a pretty awesome interpretation of the movie, there; it makes me want to hunt up the movie to watch it with that in mind...

[Smacks self in head] I forgot to provide a link. For if you have Netflix, this one's available for streaming.

I liked this one because it was different enough. And poor Welles, not only do the promotional materials blame her for all of this, they don't even show her on them. That blond isn't here at all, but Vickers!

Thanks for commenting, and enjoy the show.