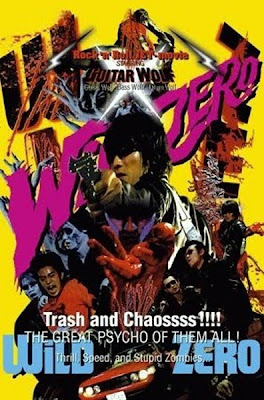 OK ... Try to get your head around this: Our hero, Ace, a pompadour sporting, moped-riding rockabilly groupie is on his way to see a concert. But this venture is rudely interrupted when aliens decide to invade the Earth. The sky is full of saucers, the dead are rising and begin their usual feast on human flesh, and humanity's only hope for survival is Ace's favorite band and the power of Rock-n-Roll...


2004 was a very good year for the living dead -- as opposed to 2003, which saw Herr Uwe Boll's gawd-awful, true, but hilariously inept House of the Dead. A genre that had been relegated to low-budget, direct to video fiascoes like Children of the Living Dead and Zombie '90 Extreme Pestilence went through a renaissance in quality, quantity, and even returned to the big screen. 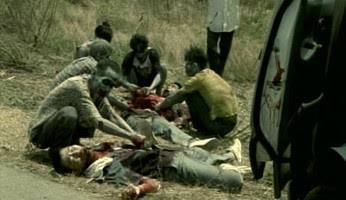 Zack Snyder's questionable remake of George Romero's Dawn of the Dead proved to be not as bad as the original film's fans and zombie purists had feared. In fact, I think it was pretty darn good, and, go ahead and call me blasphemous but I found to be more enjoyable than the original version. Well, it was -- until it turned into a pedestrian episode of the A-Team for the third act; and what the holy-heck was that ending credit sequence all about, when it switched from Romero to Italian zombie master Lucio Fulci mode? But! At least there wasn't a pie-fight ... Then, from our friends in Great Britain came Shaun of the Dead, a brilliant film that worked on so many levels; it sacred you, and made you cry and laugh uncontrollably, usually at the same time. Heck, 2004 was such a good year for the not quite dead that Romero himself finally got the long promised fourth entry of his own franchise, Land of the Dead, into production. 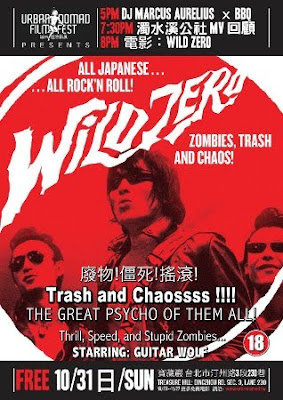 2004 also saw the domestic DVD release of Japan's very own demented entry into the zombie oeuvre, Tetsuro Takeuchi's Wild Zero (2000). (Which meant I could finally throw away my shitty VHS bootleg.) This movie -- well, this movie defies all rational explanations. A volatile brew, it's kind of like Dawn of the Dead mixed with Ed Wood's Plan 9 from Outer Space with a Kiss Meets the Phantom of the Fun Park chaser. Its got a Dead Alive mentality and an Evil Dead ferocity, with a paint-blistering soundtrack inspired by The Ramones, Gene Vincent and Link Wray. 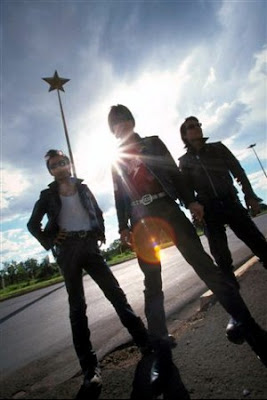 Guitar Wolf :: Drum Wolf, Guitar Wolf, Bass Wolf
And the film really is a showcase for Guitar Wolf, a real life Japanese punk/thrash-a-billy band, whose music is so over-modulated and distorted that you honestly fear for your stereo speaker's life. Again, have a listen:

Seriously. Double check your warranties before viewing. Armed with a lot of self-confidence, anti-matter guitar picks, and guns loaded with skull detonating bullets, our merry band must survive the UFO invaders, the munching zombie hordes (-- but they're not sure how because none of them have actually seen Night of the Living Dead), a cat-suit-cladded, gun-running femme fatale mercenary, and a psychotic promoter with a thing for Dutch boy wigs and terminally short pants -- who can shot lasers out of his eyes! You just can't make this shit up, folks... 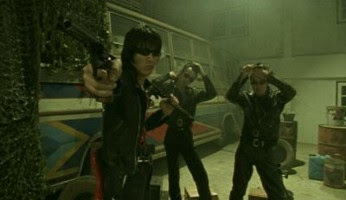 Anyways, any movie that has its own built in drinking game gets bonus points from me (and the Synapse DVD even provides a pop-up beer mug to help you along.) All you have to do is drink whenever someone drinks; someone combs their hair; anytime fire shoots out of anything; anyone says "rock-n-roll!"; something explodes; or a zombie's head "pops." And if you follow the rules, you'll be snockered by the end of the first reel. Trust me. 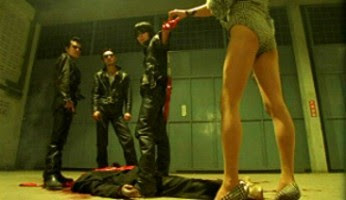 E'yup, Wild Zero is as insane as it sounds, but I'll curb your enthusiasm a little by warning you all that the film is completely, wonderfully, and unapologetically stoopid. (Even the film's director says it was meant to be unapologetically stoopid.) The sheer rawness of it works to the film's benefit but the pacing is maddeningly bi-polar, with spurts of action that just as quickly screeches to a halt, and honestly, when the film is in high gear, the dialogue is moving so fast it's impossible to keep up with the subtitles. Some things are definitely lost in translation. They have to be. There's no other possible explanation. Meaning the majority of the time you won't know what the heck is going on. 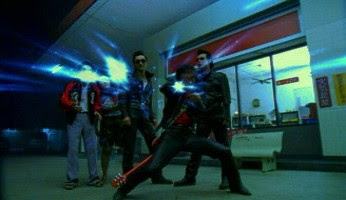 But, eh, I wouldn't even try make sense of it. For this movie is not meant to be seen, but endured! It's an assault on the senses, twisted and distorted, and wops you upside the head. And when it's over, after the dust settles and your ears stop ringing, you may not have a clue as to what you just encountered -- hell, you may not even like it -- but there's an uncontrollable urge to que it up and watch it again. Rock 'n' roll! 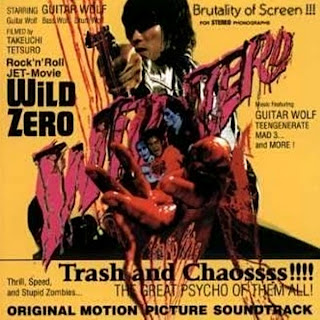