Hero. Daredevil. Showman. Lunatic. :: Getting to the Root of All Evel. 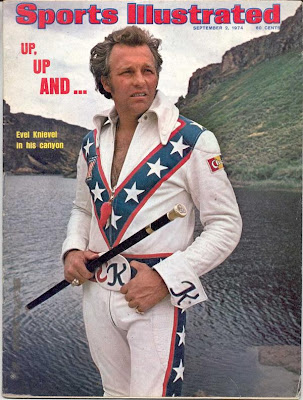 "Kids wanted to be like me, men wanted to be
me, and the women wanted to be with me."
___ ___ ___ ___ ___ ___ ___ ___ ___ ___ ___ ___
Childhood memories can often be a tricky thing. Even though clouded over with time or diluted by overlapping events, there's still a few, vivid scenes and scenarios that have stuck with me since the ripe old age of two, and, as usual, it deals with something I saw on the TV. (The power of nostalgia or scathing indictment on my generation I'll leave for you to judge...) And one thing that I can clearly remember seeing while gathered around the old wood-paneled Zenith with my family unit, was watching a man on a motorcycle, viewed from the rear, jump over several cars, miss the landing, crash, and go skidding into the opposite tunnel; rolling, flopping, and bending [unnaturally] until he and the bike finally stopped in a twisted and smoking heap. 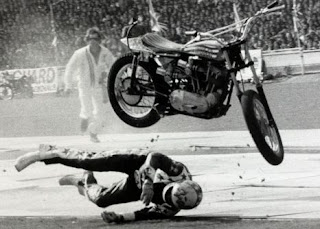 Wow! Who the hell was that guy?! 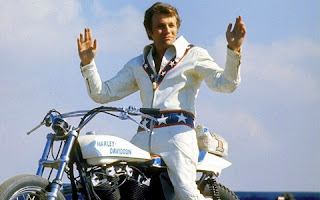 Well, that guy turned out to be one Evel Knievel (-- as those of you who were around back in the 1970's had already guessed), and this particularly spectacular wipe out -- that's been burned forever into my memory -- was his failed jump at The Cow Palace in San Francisco in 1972. This was my introduction to Mr. Knievel: hero, daredevil, and, to some, a complete lunatic and / or moron. (Not me, though, I think he's a stud.) Regardless of what you thought of him, the man was a great entrepreneur, had a flair for the ballyhoo, and risked life and limb for our entertainment -- and he's got the scars and broken bones to prove it. 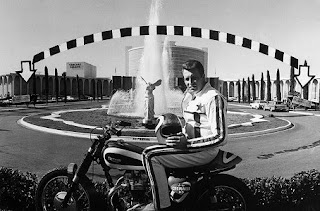 Part P.T. Barnum, part rock star in a patent leather jumpsuit, Robert Craig Knievel got his name from his lawless days in his native Butte, Montana, and first broke onto the scene as a filler piece on ABC's Wild World of Sports, where he successfully jumped his bike over several cars. Eventually, Knievel and his traveling circus broke away from the rodeos and stunt-circuit and hit the big time, when he proposed to jump the newly installed fountains at Caesar's Palace in Las Vegas in 1968.

Video courtesy of apeshitquarterly.
Now, history shows Knievel did not successfully land this jump, which ended in a horrific crash (-- during the graphic footage shot by actress Linda Evans, then the wife of filmmaker John Derek, you can actually see both of the victim's legs snap), and one can't help but wonder if he had landed the jump, successfully, would Knievel have become such a national phenomenon? Was it that wreck and our desire to see him make a successful comeback that drew our attention? Or, more than likely, a desire to see him wreck again most horribly that brought us back to watch him over and over and over? 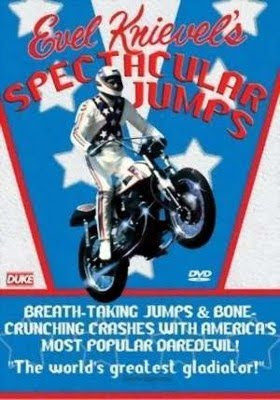 Whatever your answer is, if you'd like to see some of Knievel's successful stunts or bone-crunching wipe-outs, you can check them out on the Evel Knievel's Spectacular Jumps. Eleven jumps in total are featured on the DVD, but that's about it as they try to cram in all the goods into a measly half-hour. Included are the two stunts already mentioned plus his famous, or is that infamous, attempt to jump over the Snake River Canyon in a homemade rocket (!); and his world record jump of over 19 cars in Ontario, California. Later, he jumped over 50 cars in the L.A. Coliseum, but those were stacked differently -- although I'm sure they didn't mention that in the promos. 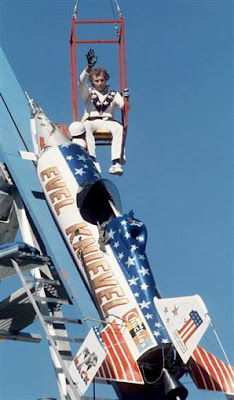 And then there was his jump over 13 double-decker buses in London's Wembley stadium, where, depending on which story you've heard, the bike was either missing a part or the ramp wasn't up to specifications; but Knievel jumped anyway, not one to disappoint the fans. After the inevitable, albeit spectacular, wreck, a dazed and broken Knievel announced his retirement. But he was back five months later in King's Island, Ohio, and made a successful jump over 14 Greyhound buses. 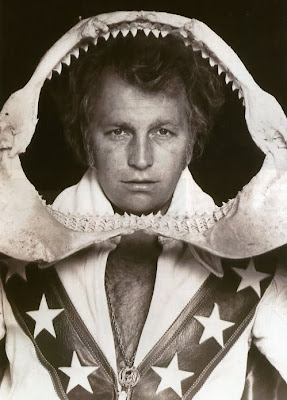 His last jump was rather anti-climatic, however ... I was eight years old by then in 1978, and I eagerly awaited a stunt that would see my hero trying to clear a tank that held 13 dangerous, man-eating shark (-- man, Happy Days so ripped this off.) Alas, the jump never happened because Knievel was injured during a test run. This proved to be his last crash and he retired for good after that. 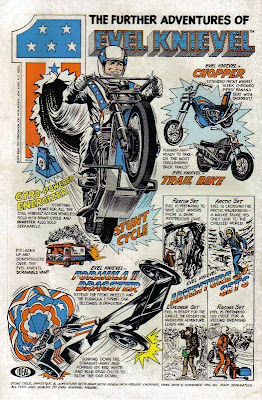 A disappointing ending to be sure, but I still have nothing but fond memories of the guy. Sure, most of them are of him crashing, but honestly, until George Lucas took me to a galaxy far, far away, no pop-culture icon had a bigger effect or influence on my formative years than the King of the Daredevils. And now, if you'll excuse me, I've got to go check and see if my mom threw out my old Evel Knievel wind-up stunt cycle and round up a few Tonkas to jump. If I recall, that thing could never stick a landing, either. 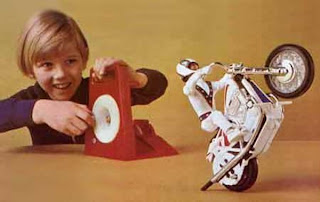