For the Love of Hitchcock :: Neighbor, Go Screw Thyself :: Looking Out the Rear Window to See The 'Burbs. 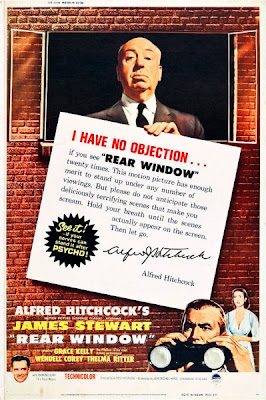 To pass the time while recuperating from a broken leg, and help fight off a near terminal case of cabin-fever, a house-bound shutter-bug uses the telephoto lens on his camera as a portable keyhole to spy on his neighbors. And while most windows he peeps through show nothing except the mundane routines of his quirky, but more or less normal neighbors, things get a little squicky when he settles on the apartment almost directly across from his own. Here, where there once was a bickering husband and wife there is now just a husband who's acting rather peculiarly: obsessive cleaning, a strange fascination with butcher knives and saws, followed by two or three trips a night with several, dismembered-body-part-sized packages tucked under his arm. 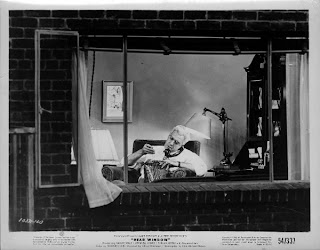 After putting two and two together, it doesn't take long to also convince both his girlfriend and cranky physical-therapist that something sinister is up across the way, but the friendly neighborhood detective scoffs otherwise. Undaunted, if it's more evidence that's needed to convince the authorities, then more evidence this amateur trio of sleuths will get -- even if it puts them at risk of being chopped up and hauled off in tiny, parcel-sized pieces themselves. 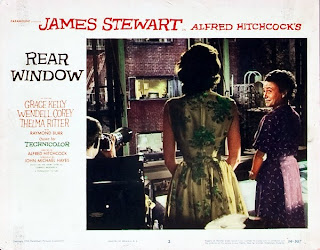 Thus, the stage is set for Alfred Hitchcock's Rear Window ... But now, let's jump ahead from 1954 to 1989, toward the climax of director Joe Dante's similarly themed, and totally underrated, The 'burbs, where everyman Tom Hanks -- after mounting a covert expedition for more concrete evidence of mass-murder next door that ends both in epic failure and the accidental destruction of the suspect neighbor's house -- goes on a rant, as only Hanks can, about how the normal, albeit paranoid, "people" who're doing all the spying and conclusion jumping, and who're too quick to judge and easily led to believe the worst in those around them, are the real menace on the block, not those whose suspicious quirks and idiosyncrasies brand them as outsiders (or worse). 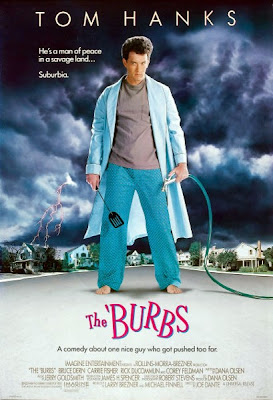 It was a bold statement for such a comedic vehicle, but, of course, in the end, the film cops-out when we find out Hanks was basically just digging for bones in the wrong place. Which is why, when the end-credits rolled, I found that I liked the first conclusion more satisfying. 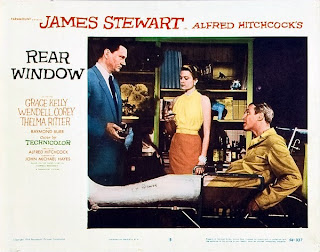 Circling back to Rear Window, then, even though presented with the same tangential and circumstantial evidence of murder, there never seemed to be any doubt to the neighbor's guilt -- I mean, Would you mistrust Jimmy Stewart's gut instincts? Still, as a viewer, I took some grim satisfaction that Stewart, even though he was right all along, didn't escape all that snooping and nose-poking completely unscathed. It's a comical final twist that he winds up with another broken leg, but, let's be honest, there is something morbidly poetic about it. 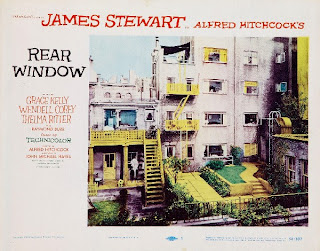 Anyways ... I think Rear Window is Hitchcock at his most static/cinematic best. Frankly, I could have spent the whole movie ogling at Grace Kelly; as I don't think she's ever looked better in any other film than she does here. And Ritter and Corey prove perfect curmudgeonly foils for our alpha hero and heroine. And through them, as we effortlessly zoom from window to window and life to life, with nothing but ambient sound (-- musical cues would only break the spell --) the giant, enclosed and fully functional set gives the whole thing a surreal quality, like you're actually looking/watching at/a life-sized diorama through a keyhole shaped glass -- which, technically it kinda was. A true feat of engineering, the converted stage was excavated and dug-out to form the courtyard -- Stewart's second-story room was really at ground level, and it took so many arc-lights to light it the resulting heat kept setting off the sprinkler system, scrubbing several days of shooting. 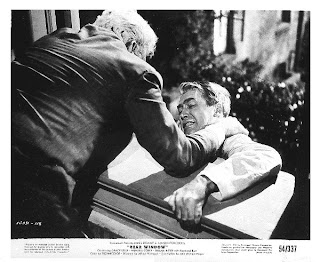 And all that effort culminates in the scene where Burr finally zeroes in on who's been spying on him and fixes his stare directly at the camera, seeing us, the audience, along with Stewart, shattering the protective glass keyhole, resulting in a most astonishing piece of verisimilitude. Luckily, though caught, when it was all over, we, unlike Stewart and Hanks, were able to leave the theater under our own steam. 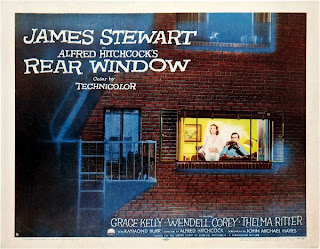 The newspaper ads for Rear Window at the Morgue.
This post is part of the For the Love of Film Blogathon, a new age telethon to raise funds for The National Film Preservation Foundation to help bring The White Shadow (a/k/a White Shadows), an early silent film that a certain master of suspense did just about everything for except direct — assistant director, screenwriter, film editor, production designer, art director, and set decorator, to the streaming masses and help defray the costs of adding a new musical soundtrack.

I’m participating. Are you?