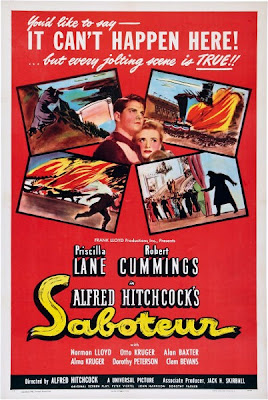 When a man is wrongly accused of fire-bombing and destroying the aircraft plant he works for, resulting in the death of a close friend, he realizes the only hope to clear his name and avoid the gas chamber is to catch the real saboteur himself. But with the law on his heels and a reluctant damsel in distress in tow, this leads to a treacherous cross-country chase from Los Angeles to New York, where, along the way, comes the realization that they've both stumbled onto something larger and more sinister than a single malcontent with an axe to grind. 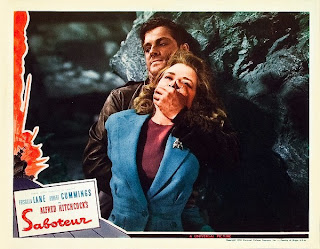 Of course, being a public fugitive, barely staying a half-step in front of the authorities, makes it kind of hard for a person to do his patriotic duty. Will our hero and heroine be able to, as the ads screamed at us, destroy this rat's nest of Fifth-Columnists and Facist Sympathizers before it's too late? Or will they be destroyed themselves?! 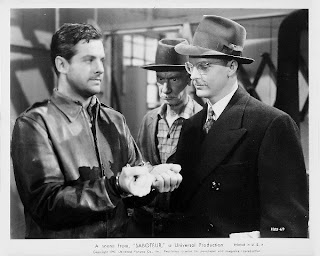 When Alfred Hitchcock migrated to America in 1940 to work a four-picture deal with David O. Selznick, after the persnickety production of their inaugural effort, Rebecca, the director spent the next few years constantly and consistently out on loan to other studios so Selznick wouldn't have to deal with him. Saboteur was a war-time quickie shot for Universal and it doesn't take a genius to see that it's basically just a rehash of the The 39 Steps, but I'd rather like to think of it as a very successful dry-run for the later North by Northwest. 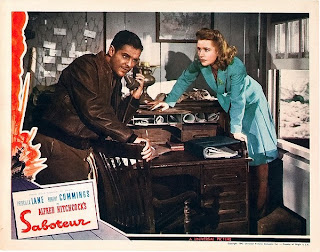 One of the film's biggest knocks is that the cast keeps it from germinating properly. Now, I probably owe Robert Cummings an apology for all the grief I've given him over the years for his oafish portrayal of the bumbling square-jaw who nearly derails all efforts to exonerate Grace Kelly and let Ray Milland get away with it in Hitchcock's 1954 nail-gnawer, Dial M For Murder. And the actor, mostly known for his comedies (-- Beach Party represent!), gets a lot of similar grief for not being able to carry the dramatic weight of the hunted Barry Kane; as does his co-star, Priscilla Lane, who most feel failed as the obligatory love interest.

But I actually think the dopey, everyman look and approach of Cummings suits the part better than the chiseled features and can-do doing of a Gary Cooper or Joel McCrea, the director's first choices. And the people who knock on the top-billed Lane? Well, they're just idiots 'cuz I think she's great. She's got spunk. And I love spunk. So, there. *thhbbbttthhhhh* 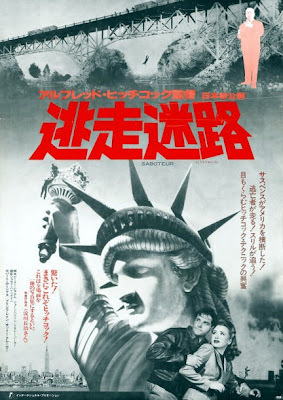 Admittedly, as a propaganda piece, Saboteur is very grounded in the era in and for which it was made (-- a fancy way to call it dated), but it also explains the film's lack of subtlety in its clear-cut message and demarcation between us and them, making the viewer work a little harder to properly see it in that context. And if they can, there's a pretty damned good movie to be seen, here. 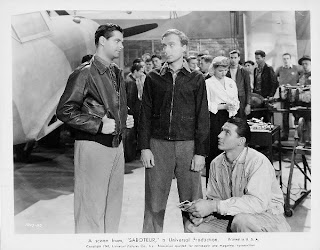 To me, there's something about the smart and snappy dialogue, Robert Doyle's eye-popping set-pieces -- from the gruesome inferno, to the interlude in the circus wagon, to the grande ball, to the (not very subtle) finale atop the Statue of Liberty -- that, for one, makes this one of Hitchcock's most under-appreciated movies, and two, why I will always count Saboteur as one of my favorites of this particular director. 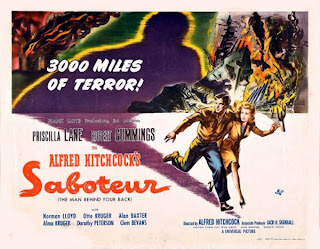 Other Points of Interest:
The newspaper ads for Saboteur at the Morgue.
This post is part of the For the Love of Film Blogathon, a new age telethon to raise funds for The National Film Preservation Foundation to help bring The White Shadow (a/k/a White Shadows), an early silent film that a certain master of suspense did just about everything for except direct — assistant director, screenwriter, film editor, production designer, art director, and set decorator, to the streaming masses and help defray the costs of adding a new musical soundtrack.

Wonderful post, WB! I know Saboteur has a following of sympathetic film fans, and you've convinced me that it's well worth watching. Thanks for being such a great supporter of the blogathon and film preservation!

I think Cummings is not too bad in this film, due to, as you note, his everyman quality, and he's well matched with Lane (I find it impossible to imagine that Grace Kelly would ever look at him twice in Dial M for Murder; his casting is a VERY puzzling choice there). Although Saboteur is often seen as a 39-steps sequel or a North-by-Northwest prequel, it can also be seen as a pair with Foreign Correspondent; the latter concerned with war in Europe, the former with (pre-war) spying activity in the US; they both work as propaganda pieces in that way.

Marilyn: And thank you, most gracious host for throwing out such an all-inclusive net for journeymen film fanatics like myself. And by all means give this flick a spin. Kruger is one of my favorite Hitchcock villains, too. Wotta cad.

G.O.M.: I really need to see Foreign Correspondant. And I love Cummings a lot in a lot things but he almost single-handedly wrecks Dial M for Murder. (Don't worry, Bob. We'll always have Beach Party...)

Okay--I may have to watch it again and attempt to keep my Lane-sister distain at bay. Good argument.....

I like Saboteur too. I've always loved that line about hitchhiking being the surest test of the American heart. And yes, Otto Kruger is excellent. What a snake!

It's a screwy thing. A lot of people get hung up on the fact that the film could have starred Gary Cooper and Barbara Stanwyck that they can't see the film for what it is and grump about what it isn't. I get caught up in this, too, sometimes, but I effort to judge what I see onscreen and not what I could be seeing inside my head.

Thanks again for all the comments, folks.

WB: Thank you, I like this movie, too. Otto Kruger is a wonderful Hitchcock villain. Robert Cummings is, as you say, a good everyman shlub. And Priscilla Lane? Wow.