For the Love of Hitchcock :: Trailer Park :: Tying it Up into One Final Knot... 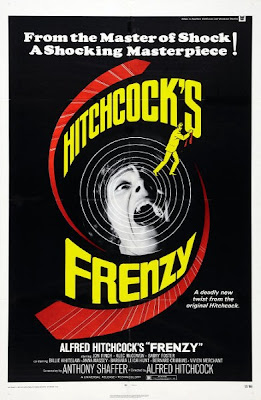 While a sadistic sexual predator runs around loose in London, leaving a trail of strangled women in his wake, all adorning his signature necktie, a surly and perpetually down-on-his-luck bartender (Finch) picks the wrong time to have a very public dust-up with his ex-wife, especially when the strangler tags her as the next victim! And as the false-witness and circumstantial evidence mounts against him, including the murder of his current girlfriend, our protagonist turns to his best friend (Foster) as his last chance of escape. Unfortunately, the best friend in question is the real killer (-- no, that's not really a spoiler, trust me), who is doing his damnedest to frame our hapless hero and lead the cops right to his doorstep. Knock. Knock...

In the annals of movie history, has there been a less sympathetic wronged man than John Finch's Blaney? What a pompous, passive/agressive ass. So is it any wonder, then, when the master-manipulator has us in the back of the potato truck, we're sweating it out with Barry Foster's Rusk as he tries to get the incriminating tie-pin back, hoping the killer will succeed -- and thus get away with murder? Wait. What?!? *snap*crackle*pop* goes the rigor'd fingers ... Yeah. Once again, we're all confused as to who we should be rooting for, which is one of the many reasons why I love this nasty and twisted little film so much. 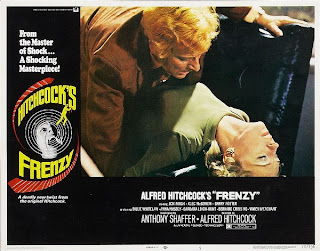 Now, one of the biggest knocks against Hitchcock is How can he be considered such a cinematic genius when all he ever did was keep making the same movie over an over again. It's a legitimate beef, too, though perhaps skewed a bit by target fixation. Here, we've got another wronged man at the mercy of the authorities (The Wrong Man), we've got another hero on the run (North by Northwest, Saboteur), we've got a homicidal sexual pervert (Psycho), we've got several scenes where we're rooting for the more charismatic killer (Strangers on a Train), we've got a killer trying to hide a body in a steamer trunk (Rope), and it even falls apart in the clumsy third act (Dial M for Murder), only to end on one of the greatest "Oh shit!" moments in cinema history. So, yeah, Frenzy could be considered nothing more than patchwork quilt of Hitchcock's greatest hits. But what, may I ask, is exactly wrong with that? 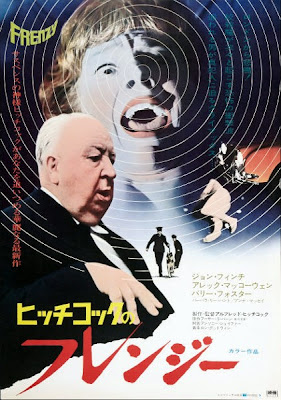 Remember, this is after a couple of box-office swings and misses that were outside his wheel-house (Torn Curtain, Topaz). So, can you blame the guy for returning to London and a genre he knew inside and out? And in so doing connected right on the sweet-spot? And the only thing, I think, keeping Frenzy out of the same breath as the likes of Vertigo, Notorious and North by Northwest as one of the greatest Hitchcock movies ever is the odious comedy relief provided by the chief inspector and his culinary-impaired wife, where every meal felt like an inside joke that I wasn't privy to. Look, I like these characters, but while we should be laughing at these intrusions I got the distinct feeling they were laughing at me instead, and, thus and so, wore out their welcome rather quickly. 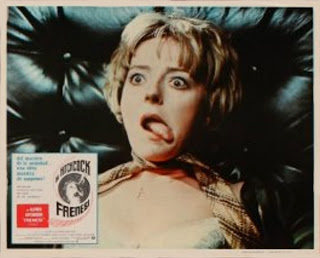 Still, there's a lot to like. And what I like the most is the juxtaposition between the murders of Brenda, the ex-wife (Leigh-Hunt), and Babs, the current girlfriend (Massey). By 1972, being pushed aside by the artistic brutality of Argento, Romero, and Polanski, Hitch was on the verge of ... not obsolescence, but, quaintness. But with Brenda, where we see the assault and murder from the beginning to its gruesome end, the old master ditched his usual tricks of implication and showed these young film turks that what they do isn't all that hard. Now compare that to the later murder, where Rusk escorts the unsuspecting Babs to his flat, where the camera follows them up the stairs, but once the door closes, sealing Babs' grisly fate, the camera silently retreats back down the way it came, back into the noisy streets, knowing full well we'll never see Babs alive again, and then ask yourself which has more of an impact? That's right. And this sequence, I think, is the absolute zenith of Hitchcock's fluid, voyeuristic camera tricks and a fine capper on his career. Because, between you and me, I like to pretend Family Plot never happened. 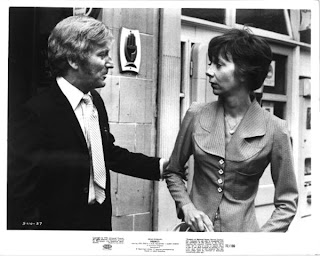 And since this will be my last post for this Hitchcock hootenanny, it's time I fessed up to something. When this Blogathon was announced I figured I'd best get to re-watching some of these movies. Only then did I realize how light my home video library was on the tributee in question. Aside from an old clam-shell VHS copy of Psycho bought at a library liquidation -- which, upon closer inspection, hadn't even been removed from the plastic-wrap -- there was nary a Hitchcock movie to be found, DVD, DVD-R, VHS, Betamax, Laser Disc, taped, recorded, downloaded or otherwise. Nada. Zilch. Somewhere between shit and squat. And as such a self-proclaimed huge fan, I just found it strange that I was never so enamored by any one film in particular to actually purchase it to watch at a moments notice. Sure. There are plenty that could be. But maybe that's not such a bad thing. Keeping some things at arms length may actually make you appreciate them even more when you stumble upon them on cable, or it randomly gets suggested up in your Netflix que, or forces you to go out of your way to see. E'yup. Maybe not such a bad thing at'all. 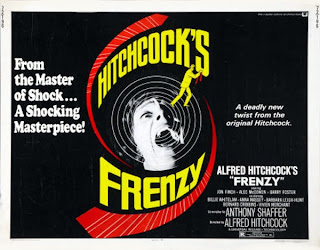 The newspaper ads for Frenzy at the Morgue.
This, alas, is my last post for the For the Love of Film Blogathon, a new age telethon to raise funds for The National Film Preservation Foundation to help bring The White Shadow (a/k/a White Shadows), an early silent film that a certain master of suspense did just about everything for except direct — assistant director, screenwriter, film editor, production designer, art director, and set decorator, to the streaming masses and help defray the costs of adding a new musical soundtrack. 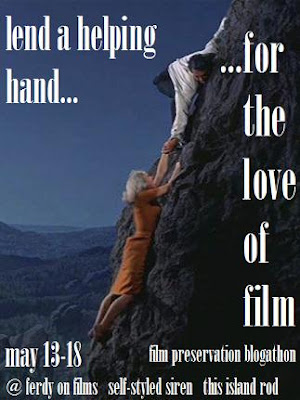