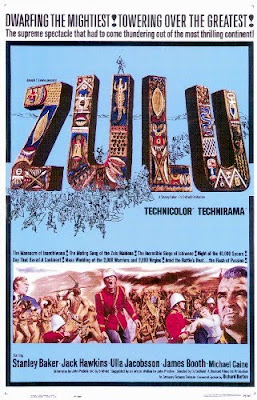 ___ ___ ___ ___ ___ ___ ___ ___
"Because we're here, lad."
___ ___ ___ ___ ___ ___ ___ ___
Back in 1879 Great Britain suffered one of its worst military disasters on the mountain slopes of Isandhlwanda, Natal, Africa, when 1300 Redcoats were overwhelmed and massacred by a large force of Zulu warriors. (And I pause for historical accuracy to add that the Brits were the aggressors, here.) Flush with victory, chief Cetshwayo next sent his impis, 4000 strong, to finish clearing out the invaders by destroying the outpost at Rourke's Drift; a Swedish mission doubling as a military hospital, where a small Welsh unit of barely a 100 men were stationed. This is where the film Zulu begins...

When word of the massacre reaches the mission, Lt. Chard (Baker), a Royal Engineer, abandons the bridge he was sent to build and musters the company to shore up the small outpost's defenses. Outranked by only a few months, Lt. Bromhead (Caine -- in his big screen debut), grudgingly relinquishes command of his men to Chard. And then the tension builds from the inside out as the fortifications go up and the camera lingers on the meager force back-dropped against the vast landscape, further fueled by the drunken ravings of Reverend Witt (Hawkins), who admonishes them to leave or they will all most assuredly be killed when the tide of Zulus arrive and overrun them. 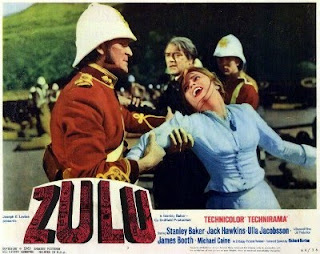 Judging by the trailer I suppose you could consider Zulu as one of those old fashioned manly-men movies that could have easily been gleaned straight out of the lurid Sweats and male adventure magazines from the 1950's and '60s. Sure, it's wrought with a few historical inaccuracies but I think that's selling it a bit short. Check out the great scene early on in the film, when the brass works on their defense strategy with Ardendorff (Gert Van den Bergh), a Zulu expert and survivor of the earlier battle, and Bromhead dismisses the native levies who also died as "cowardly blacks." He is quickly rebuffed and reminded that it isn't the Grenadier Guards coming to wipe them out. Ardendorff also brought orders that they are to hold their position indefinitely, no matter what, to which Chard snipes about which "son or heir" -- who did nothing to earn their commission -- gave that asinine order. Now it's Bromhead's turn to be indignant, when he points out that they're no one's son or heir now. It's not very subtle, granted, but it does a nice job of evening out the playing field. You definitely feel the loss of humanity on both sides when the bullets and spears start flying, and you also witness bravery on both sides of the walls as well. After that the politics are left to the politicians; this is a tale of soldiers, and the only preaching comes from the inebriated Witt. And when a panicky private asks why they have to fight, the answer is simple: because we're here. 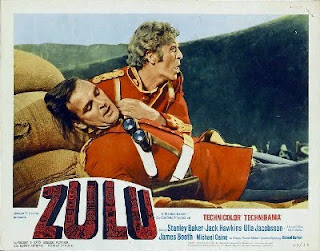 About the first third of the film is just a warm-up, dedicated to the fortifications, while the rest of the film is basically just one long, sustained battle sequence with a few brief -- and I mean brief, respites. Wave after wave of native warriors crash into the walls but are beaten back with sound strategy and superior fire power. But with every Zulu they knock down, three seem to take his place. And as the battle rages all day and into the night, with casualties mounting and most of the outpost burning or burned out, come the dawn, they all know their luck won't hold out forever. And when the sun does rise the next morning, I can only hope you all were as enthralled as I was when the Zulus sang and beat out their war chant and the Brits counter with their own hymn of defiance. Then, when the stand-off ends, and the final battle finally breaks wide open, I'll warn you that just when you think it's over it isn't as there are several surprises and one huge "Oh shit" moment still left to be unveiled. 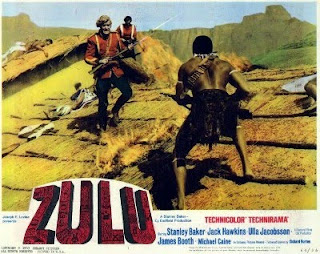 For a guy who never really did anything like this before, director Cy Endfield, with a helpful assist from cinematographer Stephen Dade, is to be commended for his staging and execution. The battle scenes last well over and hour and, with some artful framing and extended set-ups, are truly incredible to watch. And he took the time to let us get to know some of the men -- from malingerer turned hero, Hook (Booth), to the stiff upper lip of Sgt. Bourne (Green -- who, with all apologies to Steve Reeves, made a great Hercules in Jason and the Argonauts) -- so we care what happens to them. There is some unintentional humor here, though, as the British troops are so regimented to a fault you half expect Graham Chapman -- decked out as the colonel from Monty Python -- to pop up and tell everyone to "Stop being silly" and then promptly take a Zulu spear to the chest. And to train his native extras, Endfield had to show them an old Gene Autry western so they could understand what they were doing. 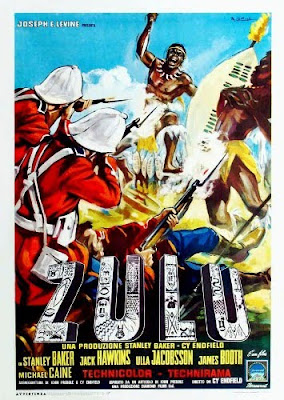 As I said before, aside from a few bit parts, this was Michael Caine's big screen debut, and most of the art for the VHS and DVD covers tout this, and him, but the film really belongs to Richard Burton's drinking buddy, Stanley Baker. (And if anyone steals the movie, it's not Caine but Green.) This film was his baby, and the tough, gritty and highly combustible actor formed Diamond Films, secured financing from Joseph E. Levine, and hired the black-listed Endfield to write and direct the feature for him. Both actors do well anchoring the film, held up admirably by the supporting cast, and gives the carnage and story told here a lot of weight and emotional punch. 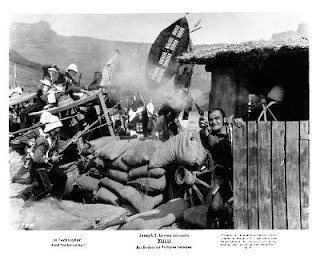 When it's all said and done, Zulu is not without its flaws (-- sharp eyes will spot re-animated corpses on both sides; Hook's malcontent seems anachronistically out of place; and some intentional humor misses badly), but it pluses leave the minuses choking on a lot of dust. From the actors, to the action, to one fantastic, rousing score from composer John Barry, it has something that today's big and empty blockbusters just don't have. Sure, they try the same noise and thunder (-- hell, Gladiator stole the Zulu's war chant for the "Unleash Hell" sequence), but they always seem lacking when it comes to three simple words: sheer, scope and magnitude. I don't think you can make grandeur, I think grandeur happens -- and I sure as a hell know you can't generate it on a computer. I mean, take a look at the scene when the Zulus first approach the mission. At first we don't even see them, but it sounds like the approach of an oncoming train. And when they do finally appear, that's about 700 non-CGI'd extras on the bluffs encircling the camp. So, do yourself a favor, when you track down the DVD make sure you don't get the cheaper pan-n-scan version. You need to see this thing letterboxed to fully appreciate the sheer magnitude of Zulu's epic scope. 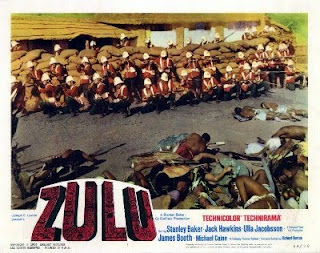