The question was brought up as a challenge over at Sergio Leone and the Infield Fly Rule (and if you haven't visited that blog, then here's your introductory chance) to list twelve films that aren't lost forever, or necessarily not readily available, but at least watchable through some minimal effort that you haven't quite gotten around to yet that you really, really want to see. Embarrassing gaps, oversights, or titles eternally languishing in my own personal to watch pile definitely adds up to well more than three dozen or so of such films, but I think I can narrow it down without looking like too much of a cine-boob. So here they are, in a completely irrational /nonsensical order:

12 :: Uchu daikaijû Girara
a/k/a The X From Outer Space
I have no real excuse here. I have in my possession not one, but two, copies of this film -- the Americanized version taped off AMC a million years ago, and the Japanese version taped off TCM not all that long ago. Now, like a lot of you, I'm one of those folks that likes to watch things in just one sitting, which I couldn't the night it aired. But, I did manage to watch the wonderful Robert Osborne "Count Floyding" it while trying to introduce this swanky, off-the-wall imported tale of rubber-suited mayhem concerning an aborted space mission that brings an egg/spore back to Earth that hatches into one of the goofiest looking kaiju-eiga to ever menace a miniaturized set with a straight face. 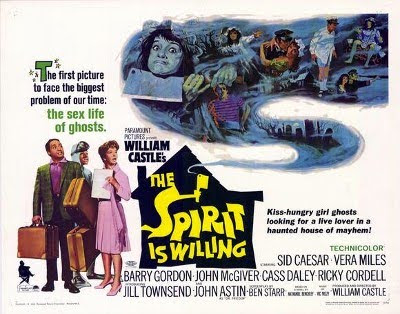 Okay, this one is a bit of a cheat as I've already seen it at least once -- when I was about four years old. I have vague memories of this William Castle production -- sadly, post gimmick-phase -- about a family moving into a haunted house, where a love-triangle entangled trio of ghosts still lurk and cause mischief; but the strongest and most impressionable image is a repeating, slow-motion meat-cleaver massacre that probably goes a long, long way in explaining my slightly bent taste in film. Thank you, Mr. Castle, for properly corrupting my childhood. Anyways, spent years trying to track this down, and by all accounts it isn't all that good, but I don't care and would still like to revisit it. 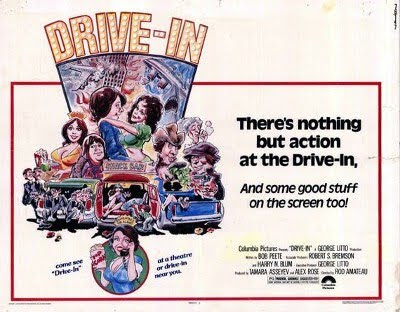 10 :: Drive-In
A solid independent B-effort financed by the Texas Film Commission with a few familiar names in the cast is reputed to be a nice time-capsule that does a good job of capturing the feel of a night spent at the local Drive-In theater in the mid-1970s -- that is if a typical night involved weed smoking grannies, muscle-cars, boss vans, armed rednecks, a botched robbery/kidnapping, and teen-aged gang-fights. Yeah ... that seems pretty typical to me. But, in all honesty, the main reason I'm interested is I want to see Disaster '76, the film within the film that spoofs the disaster film glut of the same time-frame; looks like The Towering Inferno, Earthquake, The Poseidon Adventure, Airport, and JAWS all take a hit. 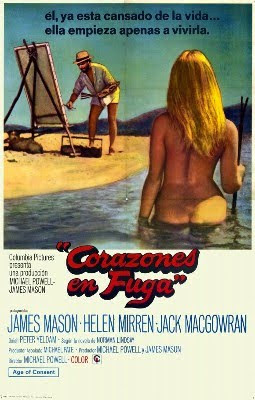 09 :: Age of Consent
A young, naive girl played by Helen Mirren serves as the inspirational muse for James Mason -- who can no longer ... *ahem* get his paint-brush up, so to speak, and breaks him out of a bad case of terminal canvas-block. Managed to catch bits and pieces of this over the years, one of which was when the lovely Mirren, after fighting off the advances of a grab-fanny local and dumping him in the drink to cool off, sits in front of a mirror, confused about what just happened, takes stock of her blossoming assets while removing her clothes, and senses that something is different. Wow. Today, you are a woman. Stuck around long enough for her to pull a Venus Rising when I finally turned it off, not wanting to see how it ended, determined to see the whole thing from beginning to end and give myself a chance to recover. Swear to god, when she surfaced out of the water sans top, I felt the freakin' Earth move. I mean she is just so ... and, oh, just watch the trailer...

08 :: On Any Sunday
No ... I'm not talking about that Oliver Stone football travesty from a few years back, but Bruce Brown's documentary on recreational motorcycling shot back in 1971. As an unabashed fan of Brown's The Endless Summer, with an eye for dynamic footage that gets you in the center of the action, combined with his lazy, laid back narration, and a penchant for hideously infectious trippy-dippy soundtracks, I really need to track this down. Hell, I'd probably watch a documentary on watching paint dry if Brown ever got the itch to do one.

Take it away, Bruce: 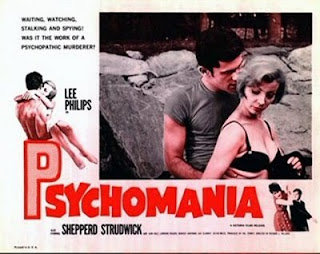 Can we all agree on one thing? That Del Tenney is a bona fide filmmaking genius. No? Feh, heathens ... Well, genius might be stretching things a bit but I think the pride of Stamford, Connecticut's relatively small spurt of surprisingly bloody and violent low-budget bottom bills from the early '60s are pretty darn good. And yes, that includes The Horror of Party Beach. Yep, I've seen them all -- except this one. And if the plot of grisly murder and mayhem that the Montreal Gazette calls an "Incongruous mix of graphic violence and Mickey Mouse Club pep [it's] like a wolverine let loose in a sock hop" doesn't get you, do I even need to mention that the cop charged to sort through the seedy suspects is played by Dick Van Patten? Ha! To the NETFLIX cue! 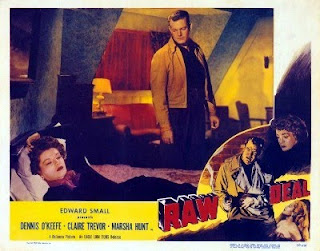 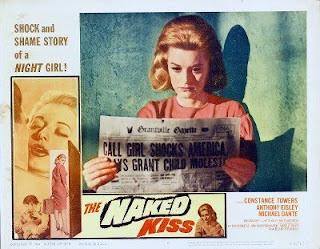 06B :: The Naked Kiss
I think if I ticked off my Holy Cinema Trinity it would probably roll out thusly: Mario Bava, Ishiro Honda and Anthony Mann. And out of all them, the most neglected is probably the last. Sure, I've seen most of Mann's seminal westerns (Man of the West, Winchester '73), and the big-budgeted epics that capped his career (El Cid, Spartacus), but I've yet to see any of his early noir pieces, and this seems to be the best place to start.

I'm in the same fix with Samuel Fuller, hence the tie. Seemed appropriate. E'yup. I've seen a lot of his war movies (The Steel Helmet, The Big Red One) but very few of his neo-noirs or crime dramas, and this one's been on the list ever since I read about it in one of Danny Peary's "Cult Movies" compendiums. 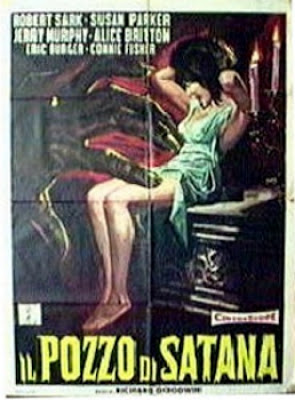 05 :: Kaidan semushi otoko a/k/a House of Terrors.
When I finished Seijun Suzuki's Branded to Kill (Koroshi no Rakuin) for the first time, there were a few brief beats before I broke the rictus of a near permanent grin and exclaimed "What the hell was that?!?" Now, that wasn't a vindictive epitaph. Far from it. No ... that was a cry for more of the same. (Gates of Flesh, Tokyo Drifter and Youth of the Beast soon followed.) So, when I finished Hajime Sato's Goke, Body Snatcher from Hell (Kyuketsuki Gokemidor) for the first time, I picked my jaw up off the floor and exclaimed "What the @#%* was that?!?" This weird and wonderful mash-up of Japanese sci-fi and Italian horror conventions was a whole six-pack of awesome, and it turns out he made at least two more in the same vein. Alas, the only version of House of Terrors that I can find is a dubbed Italian print, and though that would probably do, I'm gonna hold out awhile longer for something better. But not too much longer.

No trailer available, but just to give ya the feel for
Sato, here's the International trailer for Goke: 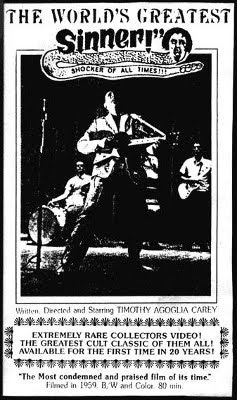 04 :: The World's Greatest Sinner.
Kind of a more low-budgeted and royally futched-up version of A Face in the Crowd, here, Timothy Carey, the penultimate cinema kook, plays a greasy insurance agent who sees the light, goes off his nut, and becomes an even greasier rockabilly messiah. Promising life eternal for a little cash, his populist movement is co-opted into a run for President but is derailed due to the new prophet's penchant for 14 year old girls. Always meant to track this down, but it looks like TCM is gonna be showing this on The Underground in October. 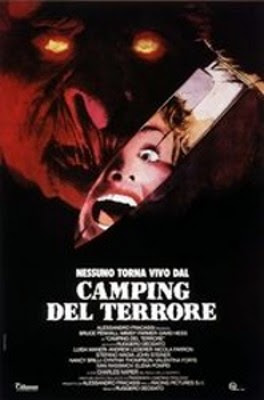 03 ::. Camping del Terrore
a/k/a Body Count.
From the body counts, to modes of violent death via lethally sharp objects, and plots that seldom made one damn bit of sense when the killer is finally revealed and his/her psychosis dribbles down their leg like a loose-diapered incontinent after a Mountain Dew binge it's easy to see the influence of the Italian gialli on American slasher films. Some claim the stalk-n-slashers were nothing but rip-offs, or poor bastardized versions of their Continental brethren, and they could be right, but I don't really care. And speaking frankly, I love both genres almost unconditionally. And turnabout is fair play, right? Which makes me anxious to catch this late-entry anomaly in the initial slasher-boom, where Ruggero Deodato -- of Cannibal Holocaust infamy -- turns the tables and tries to make an authentic American slasher movie. Let's just hope he did a little better than his cannibal cohort, Umberto Lenzi. Egad, but Welcome to Spring Break was awful -- like I said: almost unconditionally. 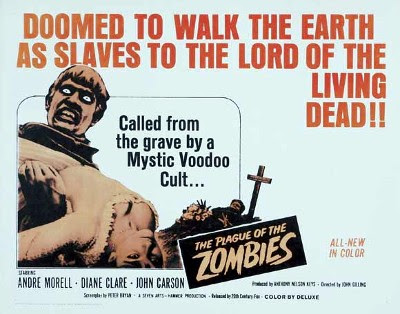 Strangely, I'm a bigger fan of Hammer Horror when Dracula, Frankenstein or the Mummy is nowhere in the title. (But I loved Curse of the Werewolf; and was that the only werewolf movie they made? If so, that's too bad). Nope ... give me yetis, reptiles, gorgons, or vampire circuses, if you please -- or good old fashioned zombies (...destined to become gut-munchers just two years hence.) And I think there's still a bit of lingering childhood trepidation of those creepy monster-mag shots of this film's morbid and decaying masses as the real reason as to why I haven't quite gotten around to crossing this one of the list yet. 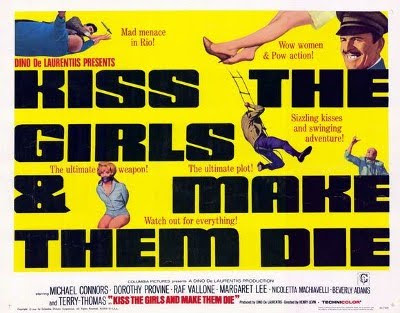 01 :: Se tutte le donne del mondo
a/k/a Kiss the Girls and Make them Die.
Ah, my current Holy Grail. Why do I wanna see this movie? Easy ... I stumbled upon the trailer. And I think for once I'll just let said trailer speak for itself: Spies! Femmes! A Swanky Soundtrack! And BANANAS!!!!!

Behold, the most awesomest movie trailer ever:

Doesn't that look just great?!?
Like I said, the list could go on and on but I'm gonna do my best to get these titles wrapped up and watched by the end of the year.