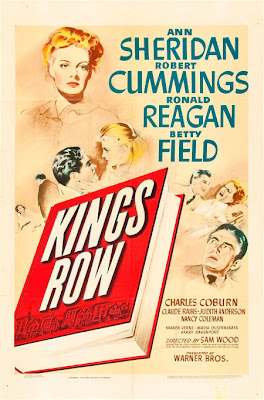 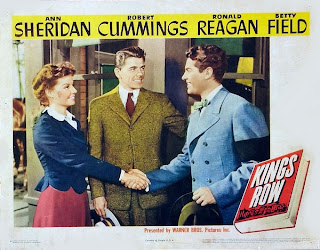 Okay, I know the film eventually has a happy ending, but, man, was this thing ever depressing to sit through. From the opening gut-punch of no one attending poor Cassie's birthday party, to her murder, to the brutal, and totally unnecessary, amputation of McHugh's legs by a vengeful doctor, could it get any worse? Don't get me wrong, the film is fascinating and really quite good despite it's, for lack of a better word, perverse and melancholy tone. 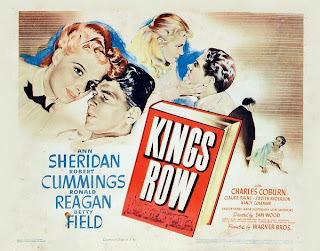 Based on Henry Belleman's novel of a small town's dirty secrets -- insanity, nymphomania, incest and sadism -- director Sam Wood and scriptwriter Casey Robinson do a pretty good job of adapting this lurid story in such a way that it not only keeps the melodramatic elements from spitting the bit, cinematically speaking, but also appeases the draconian Hayes Code rather deftly by keeping the majority of those elements in; and frankly, I think the film has one of the better uses of a violent thunderstorm as euphemism for s-e-x -- good enough that even though it couldn't have been more obvious, I didn't find myself giggling at the obviousness. 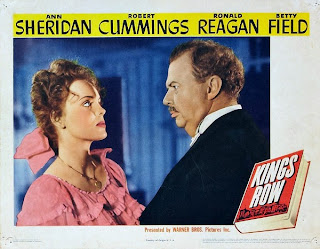 Acting wise, Robert Cummings is great as Parris, the wide-eyed hero; and Betty Field is equally impressive as the doomed Cassie. It's odd to see Maria Ouspenskaya out of her gypsy duds as Cumming's' benevolent grandmother, and even odder to see Charles Coburn shake his old fudd routine and play an outright bastard of a zealot. And give Reagan some credit, too; he was pretty good as the cad about town, McHugh; and even better when tragedy hits him hard. All politics and monkey movies aside, I knew the guy could act after watching him as the villain in Don Siegel's remake of The Killers. All of it adds up to pretty good drama that doesn't overstay it's daunting 128 minute screen-time. 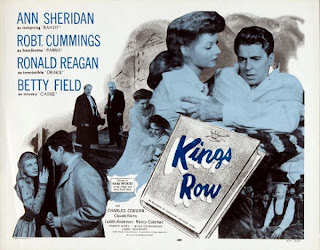