This New Dimension in Terror Feels A Lot Like the Old One :: A Beer Gut Reaction to Steve Miner's Friday the 13th Part 3-D 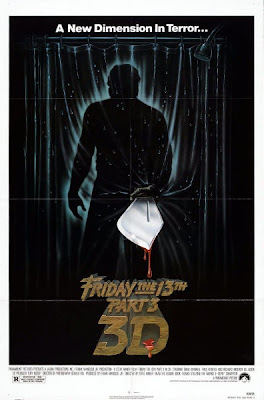 Out of the first wave of Camp Crystal Lake bloodbaths, Friday the 13th Part 3 is probably the most reviled and least popular of the original four. And if it weren't for the Jason-less installment in Part V and the whole mountain of stupid that was Jason Takes Manhattan, it'd probably be considered the worst of the franchise period. And rightfully so, as aside from a fine final girl in Dana Kimmel, it's a pretty crummy movie. Sure, it was the first appearance of the iconic hockey mask, but for those of us who prefer Mr. Potato-Sack Head it's kind of a wash. 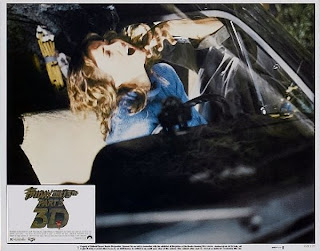 Taking place the very next day after the events of Friday the 13th Part 2, another group of teen-aged cannon fodder head to the Kimmel family cabin, nestled somewhere on the scenic shores of Crystal Lake, for a weekend of pot-smoking and boot-knocking. Typical, yes, and about the only original twist in the plot comes from Kimmel, who relates how she caught a glimpse of young Jason Vorhees when she was a kid -- and the episode still haunts her to this day. Beyond that, the killings come in earnest, twelve in total, with a strong sense of deja-vu as a lot of the kills and set-pieces are just nth generation carbon-copies of the original film -- right down to the twist ending, with Kimmel the lone survivor; only this time the fetid and water-logged corpse of Mrs. Vorhees makes a cameo appearance. I know that doesn't make any sense. Yes, I know she doesn't have a head. Just roll with it, okay. 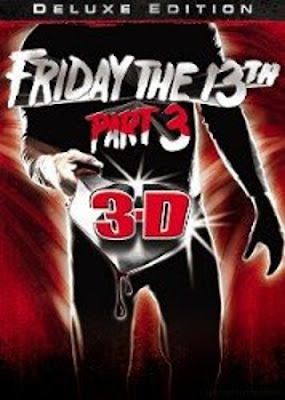 Of course we're two paragraphs into this review and I haven't even mentioned the film's biggest lure back then was that it was filmed in 3-D. See, the early 1980's saw an inexplicable resurgence of this camera trick and it resulted in a rash of horror film sequels whose numerations, by some cosmic twist of fate, just happened to serendipitously line-up: JAWS 3-D, Amityville 3-D and Friday the 13th Part 3-D all came out within a year of each other. At the time of there theatrical release, I managed to catch the giant shark taking out Sea World, but since my seventeenth birthday was still a few years away, even though blessed with an early growth spurt, I failed to bluff my way in and got busted at the ticket counter when I tried to see this flick, meaning I had to settle for the 2-D version when it finally hit the Video Kingdom. Which brings us up to a few days ago when I discovered that Paramount had re-released Friday the 13th Part 3 on DVD in both a 2-D and 3-D version. 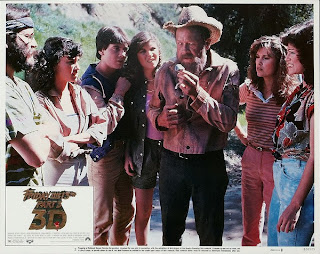 Now, I had seen a few other DVDs touting the gimmick but took a pass on them after taking the plunge several years ago on a 3-D version of Catwomen on the Moon that didn't work worth a shit and was a complete waste of time and money. But still riding on a 3-D high from a recent trip to Disney-World, partaking in three different 3-D attractions, which were all a-flipping-mazing, I thought perhaps maybe technology had finally caught up to allow this to actually work.

So did it work?

Well, yes and no. Let me explain:

Putting the DVD in, I donned the glasses that were included and settled into the chair, but from the very beginning something just didn't feel right. The way the glasses were designed didn't fit my noggin' all that well; they were too wide, the eye-holes set too far apart, and the nose cut wasn't centered, which tended to draw your eyes to the left or to the center (-- think Opti-Grab from The Jerk). As for the picture, well, if you cocked your head just right and squinted, you almost got the effect the creator's intended. Thus, about a half-hour in, with all the overlapping images that wouldn't quite meld, I had myself a splitting headache; about an hour in it had erupted into a full blown migraine with the usual accompanying nausea; and then ten minutes later, I was rushing to the toilet and heaved up the Chinese take-out I'd ordered and eaten. 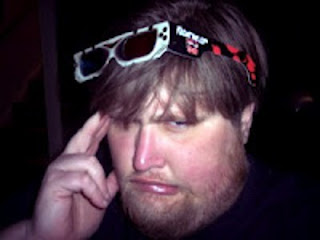 Undaunted, after a handy Naproxem, I was determined to finish this f@cker. But first, on a whim, I went in search of some other 3-D glasses left over from B-Fest. I found them, donned them, pressed play, and the difference was night and day! With the proper eyewear, this thing really popped off the screen! Now, IMHO, the process worked best in the depth of field; when you have something stacked from front to back. Not so much, though, when they purposefully thrust something out at you; the only time that really worked was an amazing sequence when Kimmel dumps a bookcase over and the books plummet toward you and Jason. And yes, even in 3-D, Shelley is still a complete douchebag. 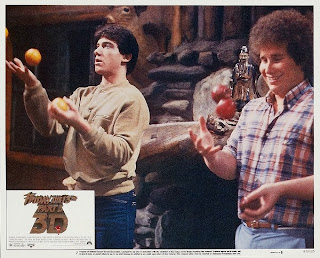 In the end, Friday the 13th Part 3, no matter what dimension you see it in, is still a crummy movie, but, from what I saw, forgetting the rough start due to some faulty equipment, I think 3-D on DVD is a viable commodity and look forward to more re-releases of other 3-D flicks. Think of it: It Came from Outer Space or Creature from the Black Lagoon anyone?

Newspaper ads for Friday the 13th Part 3 at the Morgue. 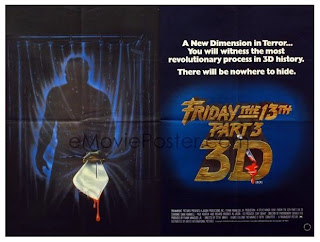 Yeah. And Paramount owes me $9.50 for the lo mein and egg rolls sacrificed for this review.