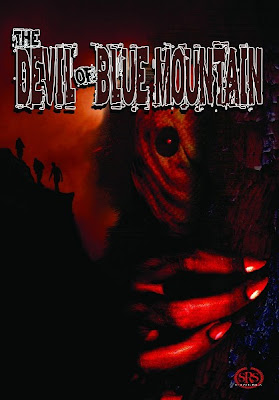 Hi, my name's W.B. Kelso and I have a problem. Despite all better judgment, and knowing exactly what I'm getting myself into, I am addicted to shitty, shot on video and direct to DVD horror flicks. Which is why I found myself a few days ago glued to my computer monitor 'til the wee hours of the morning, watching the perpetually mounting stupidity of Joshua P. Warren's The Devil of Blue Mountain. 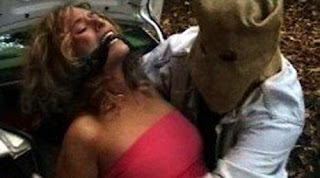 Wasting little time, the film opens with two rave-girls getting pulled over in the rain by the cops after a hard night of clubbing. As they quickly try to hide the doobie they were sharing, we get our first inkling that something sinister is afoot when the cop that pulled them over is a little on the paunchy side and clad in a Canadian tuxedo (re: a denim jacket and jeans; also of note, we don't get to see his face -- yet), who proceeds to yank both girls out of the car, restrain them with handcuffs, gags them, and then bundles them into the trunk. Yeah, it's one of those movies. And as the credits roll, I almost turned it off and ran away before the idiotic soundtrack, sounding like a long, dry-belch reverberated through an echo-chamber, accompanied by some strung-out junkie squeaking out the Lord's Prayer, had me mesmerized and looking at the screen like an errant puppy's first encounter with a slide-whistle. 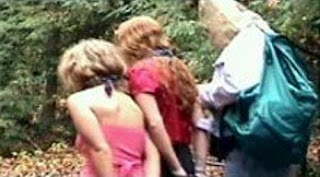 Driving deep into the Blue Ridge mountains, before he lets the girls out of the trunk, our killer dons a burlap sack to hide his features -- so we'll be referring to him as Mr. Potato-Sack Head. And as he hobbles them, we get the first lingering shots of our victim's long legs and high-heeled adorned feet -- get used to them folks, you'll be seeing them a lot over the next hour. And with that, Mr. Potato-Sack Head marches his still bound captives off into the woods at gun-point, where they silently walk around for awhile, the camera once more lingering on legs and feet -- mostly feet, and then they walk some more. Walk. Walk. Walk. Feet. Feet. Feet. Walk. Walk. Walk. Feet. Feet. Feet ... 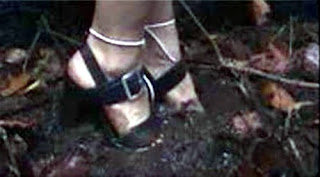 This goes on for like an hour, with the only break in the tedium provided by a near escape when Mr. Potato-Sack Head lets his guard down to take a dump behind a tree. Mention should also be made that all of this inaction takes place over three whole days, and though the film only last 82-minutes, you feel like it's been shot in real time. Each night, while gathered around the campfire, Mr. Potato-Sack Head offers his captives food and water. When they reject these advances, he clumsily gropes at them a little and pours water on their feet. (I swear, you can almost hear the director smacking his lips and rubbing his cock against the tripod during these scenes, which might help explain why a good portion of the film is constantly knocked out of frame...) 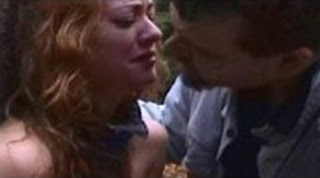 Finally, after another day of walking and soiled feet, we reach the climax, where Mr. Potato-Sack Head finally speaks, telling the girls to strip. Once naked, he then lashes them to a tree in a clearing. Rendering them completely helpless, Mr. Potato-Sack Head then removes his mask, revealing a face that has been horribly scarred, and tries to kiss them. Like everything else, this is botched pretty badly. Taking up his rifle, our villain then retreats into the trees, where he takes up position, aims his rifle at the victims, and then waits. And waits for what? Whoa! What? And then it hit me, these victims aren't victims at all but bait. Bait for what, you ask? Wait for it...

And then, after 78 minutes of what boils down to nothing more than a skeezy foot-fetish video, The Devil of Blue Mountain takes quite a surreal turn when Bigfoot clomps out of the trees and zeroes in on the bait. 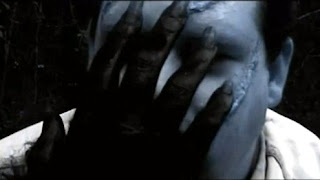 Wait. Bigfoot? Really? Bigfoot ... Hunh.
Well, I think the guy in the really shitty shag-rug costume is supposed to be Bigfoot, or some other mythical mountain creature, who starts groping at the girls. (And for the record: he's smoother with the ladies than that other idiot.) Mr. Potato-Sack Head then blows the creature away; and after making sure the beast is dead by putting another bullet in its brain pan, he releases the girls, gives them both a huge wad of cash and tells them to get lost. After they vacate post haste, our boy takes a seat beside the carcass, and in case we didn't get it, compares the creature's claws to the claw-marks on his face. He then starts to cry. 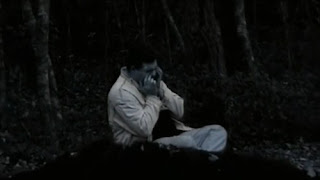 As I said before, The Devil of Blue Mountain is a whole can of stupid that reaches some kind of whole can of stupid super-conductivity in the last few minutes. I'll admit I laughed long and hard at that ending when first encountered, but, upon further reflection, the whole thing seemed a rather sad attempt to make all the pervy stuff that happened before it OK, and even justifiable, because our villain was in fact a hero of sorts. And no matter how hilariously awful the results are, that is just all kinds of wrong. 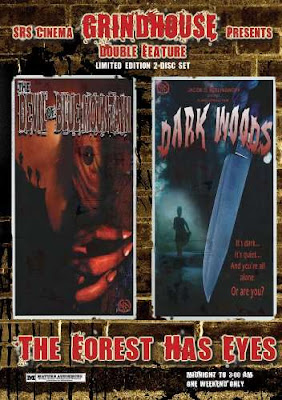