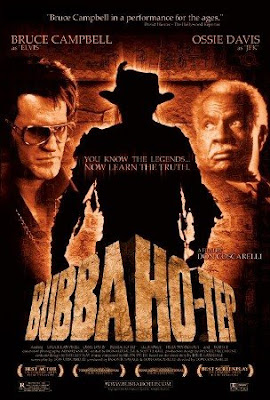 His first novel, Act of Love, about a brutal serial-killer, had me guessing until the very end about the killer's true identity. The Night Runners, a vicious piece of Splatter Punk, is kind of in the same vein -- more like an artery, mind you; the jugular, waiting for The God of the Razor to come collect his due. And his cult classic, The Drive In, has a mysterious, trans-dimensional comet that gulps up the denizens of The Oribit; a massive six-screen drive-in, trapping them there, where all they have to live on is soda, popcorn and -- eventually -- each other. His latest novels, The Bottoms and A Fine Dark Line, are murder mysteries, too; but they're more of a coming of age story as each is told from the perspective of a young boy. Both set in his beloved east Texas, the stories come off as an odd combination of Harper Lee and Stephen King, mixed with the narrative drawl of Joe Bob Briggs, or some other, lethargic good-old-boy spinning tales on the back porch. 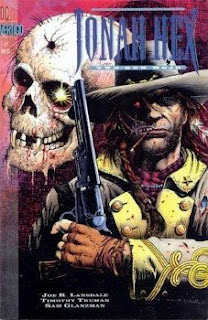 I was personally introduced to Lansdale's work when I picked up a copy of Jonah Hex: Two Gun Mojo at the local comic shop. And I liked that wild western tale so much I snagged the sequel, Riders of the Worm and Such, and that led me to tracking down his Lone Ranger and Tonto series, which he and artist Tim Truman also did, earlier, for Topps Comics. Lurking in those pages of "It Crawls" was a story where the legendary lawman and his trusted partner run afoul of a resurrected Aztec Mummy that's rampaging across Texas, leaving many dead bodies in it's wake. And that's one way to describe Lansdale's work ... Who else would have dreamt to have the Lone Ranger and Tonto fighting off an evil mummy from outer space? That's the thing about his writing, though; the situations are completely absurd, but played straight on a razor, with enough nuggets of truth scattered about that one will think that the situation is not only plausible but possible. Which brings us to Don Coscarelli's film, Bubba Ho-Tep, that's based on a Lansdale short-story featured in the Writer of the Purple Rage anthology. The premise of the film? Well, try to get your head around this: 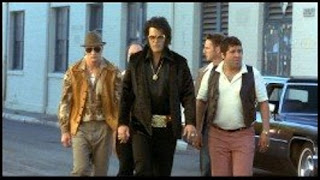 In a retirement home, living under an assumed identity, an aged Elvis Presley (Campbell) is alive but not very well. Seems the Big E was tired of his pill-popping lifestyle and swapped places with an Elvis impersonator; but all traces of this switch were lost in a trailer-park fire. So to the rest of the world, Elvis Presley died back in 1977, but in truth, The Weekly World News was right all along. Saddled with bouts of dementia, a bum hip, and "festering pecker," a forlorn Elvis looks back on his life with much regret. His only friend at the home is Jack. Now Jack (Davis) thinks he is former President John F. Kennedy. The victim of his own conspiracy, Jack is convinced part of his brain was removed, and then he was dyed black and hidden away in Texas as part of some insidious plot hatched by Lyndon Johnson.

Things turn even more sinister when the mortality rate inexplicably spikes at the nursing home. Soon enough, our two semi-incontinent protagonists discover that an ancient Egyptian Mummy is stalking the grounds and sucking out the souls of their elderly roommates. And since no one else would ever believe them, these two legendary figures gear up for one final showdown to try and save the day.

Sounds completely ludicrous doesn't it? Sounds like typical Lansdale to me. 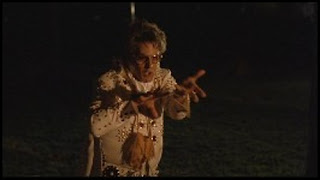 I actually got to see the film during it's limited theatrical run, but sadly, the film never could find a real distributor, and that's too bad because more people really needed to see this film. Bruce Campbell turns in a completely amazing performance as the curmudgeonly and decrepit King of Rock-n-Roll. How good is he? Well, about half way through the film, I honestly forgot that it was Campbell. The scenes where he expresses regret over his life choices, and laments about abandoning his daughter is heart wrenching stuff. After he points a blaming finger at his wife, the Colonel, Dr. Nick, and the other usual suspects, he realizes the biggest culprit in his downfall was himself. Those scenes really got to me, and Campbell's delivery is the reason why. Not really known for his subtlety, he sold me, completely. Campbell's involvement in this independent production could have been either a boon or a bust. Truthfully, the further away we can separate this film from Raimi's trilogy, the better, because those expecting Evil Dead IV, or similar Ash like antics from our boy, could be disappointed -- but, luckily, the film is good enough that you won't care.

The film's real casting coup, though, is Ossie Davis, who brings much weight, spirit and coyness to the Jack character amidst all the surrounding insanity. Like I said before, we believe Elvis is who he says he is, but Jack is a complete loony tune, right? Or is he? Coscarelli leaves all kinds of clues and hints that maybe Jack is telling the truth, too. You just get to the point where you say it's so insane, how can it not be true? 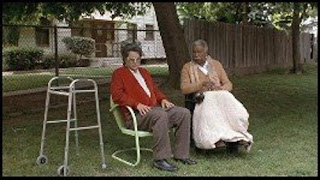 Coscarelli then made the right decision by letting the plot be as absurd as it wants to be, but kept his characters stone cold sober. The actors and characters are so good, and bring such dignity to the scenes that deal with regret, getting old, and the mistreatment of the elderly -- discarding them in homes, where they're treated like helpless children -- that it's a little jarring when we go from that stuff to the soul-sphincter-sucking mummy stuff. And if the film has one flaw, it's that it switches moods from melancholy to manic so quickly, without any kind of transition, it tends to be a bit disjointed in spots.

Still, the film can be looked at and enjoyed on many levels. As a metaphor, absurd escapism, or a touching treatment of growing old, and going out with dignity on your own terms. What it definitely did was overachieve to something far, far greater than it's schlocky trappings. Personally, I like to think of it as Lansdale, Coscarelli, Campbell, and Davis giving these two truly American cult-heroes of the last century -- both enshrouded in scandals while they lived (and even more so after they died) -- who both met tragic deaths long before their time should have been up, a chance to go out in a blaze of glory. 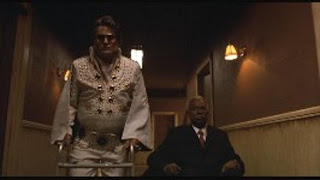 Elvis gets to be the Lone Ranger, mounted on his silver walker, with JFK, his trusty Tonto, right beside him in a motorized wheelchair. Together, they ride to the rescue, and in a sense, ride off into the sunset. It's hysterical ... yet touching, and beautiful all at the same time. That is why at the end, after the villain is vanquished, when a mortally wounded Elvis thanks the stars above for this last opportunity to do something right, this particular web-critic had tears in his eyes.

Hail to the King, indeed. 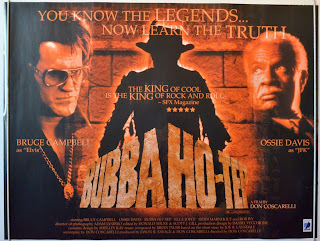 Excellent review for an excellent film, Bubba Ho-tep is epic on every level

Thanks man. I just really love how a film about an aged Elvis and JFK fighting an ass-sucking mummy has more layers than a damn onion once you start peeling back the skin.

Good show, Beer-Gut. I'm a huge Lansdale fan, and you've got this thing spot-on. I lost my Dad over _Bubba Ho-Tep_ one Christmas; I might tell that story own my own blog this season. But you packed just about everything into this blog so that people can go out and discover just how great this film is. Damn good review.