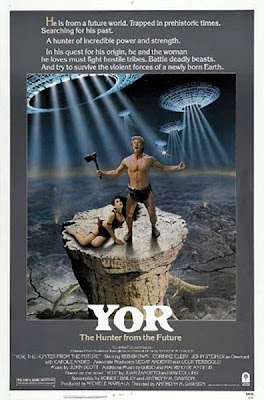 When a mysterious stranger saves a couple of simple villagers from a prehistoric monster, they join this lost barbarian on a quest to discover who he is, where he came from, and find others of his kind. A path that leads them into conflict with all kinds of creatures, both four legged and two-legged -- some armed with clubs and spears, others with lasers and killer robots...

Being an unabashedly huge fan of Antonio Margheriti, no matter what pseudo-name he filmed under, and no matter what genre he focused on, be it gialli, pepla, or, especially, his hair-brained sci-fi epics, one could probably guess how I feel about Yor, Hunter from the Future. That's right. Greatest. Movie. EVER! A bat-shit insane mash-up of Margheriti's career up to that point, the film is just a whole six-pack of the awesome. You will believe a barbarian caveman of the future can kill a giant bat with a rock, then fly its corpse into battle against a horde of horny yetis, while a cock-knocking Queenish-soundtrack blares, as our hero lets out his patented war-hoop, and then lets his axe do the rest of the talking for him. 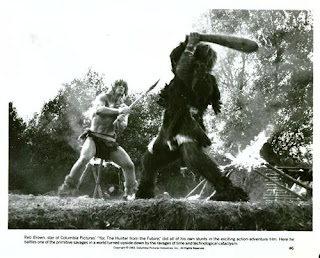 And you know what else makes this movie so awesome? I mean, aside from all the Barbarian and Barbarianette loin-cloth inducing butt-floss? Two words, folks. Reb, and Brown. Who's he, you ask? 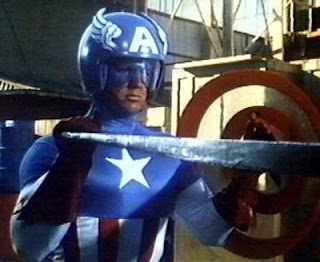 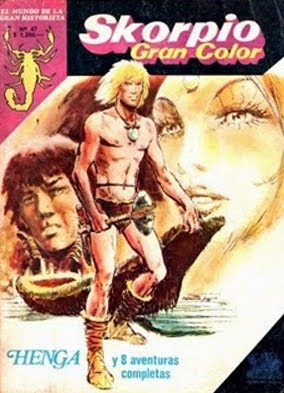 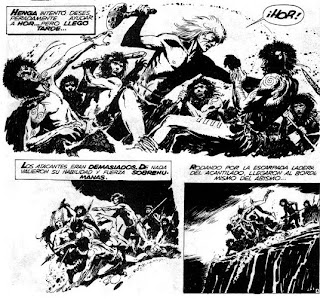 Sure, every tribe he makes contact with seemingly comes to a genocidal end before he busts skulls and moves on, but, eh, he's got more important things on his mind -- like all the cave-women who fall for his roguish charm and bleached out Prince Valiant due. Maybe it's a pheromone thing his advanced species have, combined with all that body grease. (That's me shrugging right now.) I also love how, about half-way through the film, we radically switch gears from yeti skull-cracking and endless questing to killer robots, space arks, and an evil overlord, complete with evil vocal reverb, after our hero and his companions stumble upon the rear tail-light of an old Taurus that turns out to be a [damned] talking death-ray without batting a plot-eye. 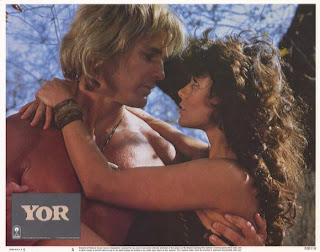 Originally shot as a television mini-series for Radiotelevisione Italiana (RAI) in 1982, Il Mondo di Yor consisted of four one hour episodes -- meaning that out there, somewhere, there's about a three and half hour cut of this thing. (I think this made for TV origin also goes a long, long way in explaining how a post-nuke Italian flick had zero boob-shots in it.) Margheriti lensed the entire film in Turkey, taking advantage of the plot-enhancing geological areas of Cappadocia and Antalya. After the series aired, obviously, it was cut and cobbled down to about an hour and half and released theatrically. Columbia Pictures brought it stateside in 1983, where I saw it five times at the old Imperial 3. Twice in one day once. And you need to see it, too. A lot. 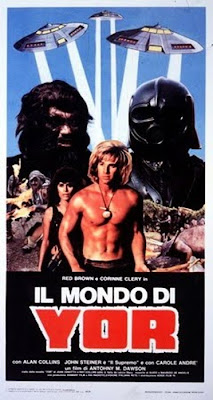 Now, to do that, to see it, I've got some good news and some bad news. First, the bad news. Though it was released on VHS many, many moons ago, Yor, Hunter from the Future still hasn't had a legitimate DVD release yet. This, is a crime. However, the good news is Amazon currently has an amazingly clean and widescreen print available to rent or buy via there streaming services. And though I can't burn it onto a DVR, a bone I intend to pick at some future date, I went and ahead and bought it. And now Yor is mine to mine forever. 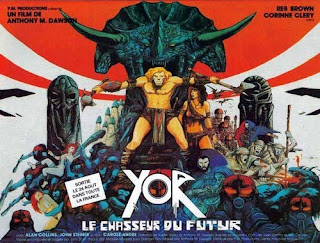