Travelogue :: The Final Fate of He Who Walks Between the Arches. 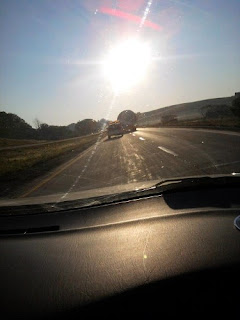 For those of you who have followed my dragging of knuckle for the past ten years or so are probably keenly aware whenever my obsession over all things cinematically challenged requires me to travel to film festivals in an easterly direction means an encounter with He Who Walks Between the Arches, the Patron Saint / official mascot of these storied expeditions, is not only probable but inevitable. For those of you who aren't as familiar, some explanations are probably in order. You see, somewhere in the middle of Iowa -- Coraville, to be more precise, there's a McDonald's just down the street from the Kum & Go, where something completely creepily and kookily resides: 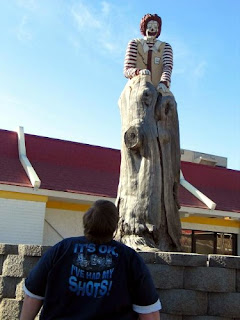 Appearing to have scraped and crawled its way out of that primordial and petrified stump, this awesome piece of chainsaw folk art kept a silent and solemn vigil on travelers and diners of all kinds of ilk for nearly four decades, which is why we quickly dubbed this not-so-spontaneous pagan fast-food manifestation as He Who Walks Between the Arches. 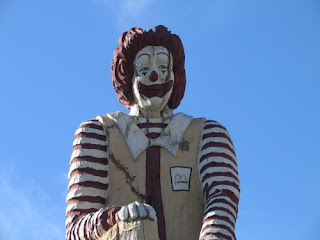 Upon our first encounter, we also quickly came to the conclusion that it would be wise not to cross him or piss him off -- in fact, we were scolded for taking pictures by one of his protective nymphs, cleverly disguised as a fry cook on a smoke break, daring to defile and desecrate The Great Wooden Ronald (as he's known in some circles) by capturing HIS ju-ju with our cameras. I am so not making that up. However, as I said, having watched way, way too many movies of this ilk, and not wanting to find ourselves several miles down I-80, only to look in the rear-view mirror to see that THING crawling up the trunk to get those fries and burgers back the hard way, we chose to not poke HIM with the proverbial stick of blasphemy. Nay. 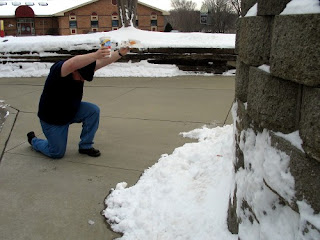 And verily, instead, we usually left some cheeseburgers on the altar of cinder from bended knee, so He Who Walks Between the Arches would grant us safe passage on our long and erratic journey. Still... 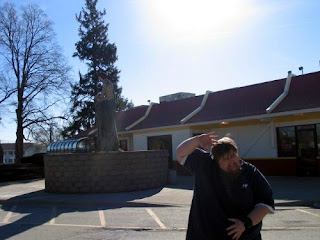 One can only look so long upon His countenance before looking away, or risk turning into golden arch of pure salt. 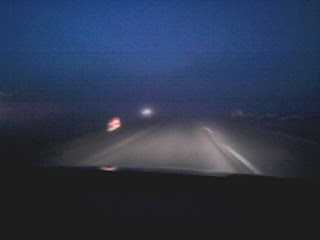 Okay, so, with that set-up now out of the way, when my buddy Mike and I headed to Pittsburgh for the Drive In Super Monster Rama last month, we had planned to stop to once more pay our respects. The ominous, meteorologically defying fog we barely survived plowing through in and around Omaha was truly a sign of ominous portent. For when we finally reached Coraville the first thing we noticed was that the McDonalds in question had moved one whole lot south of its normal location, and, more distressingly, HWWBTA was nowhere in sight. Gone. This could and would not stand! Which is why, after placing our breakfast order, we demanded to speak to the manager to get to the bottom of what happened to HIM.

Said manager was very forthcoming as we clogged up the drive-thru lane and got our explanation. Turns out when the restaurant moved there was an effort to relocate the statue along with it. Unfortunately, the stump was so termite ridden this became an impossibility, and so, He Who Walks Between the Arches was felled and abandoned back in the old lot. As we listened to this tale, stunned and forlorn, we were told HE was probably still over there. BUT! Something else had happened. Something truly odious and needling toward disturbing. And as we pulled in and found Him, and went in for a closer look. This is what we found... 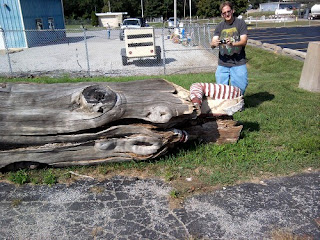 That's right. Someone took His head. His FRAKK'N Head! 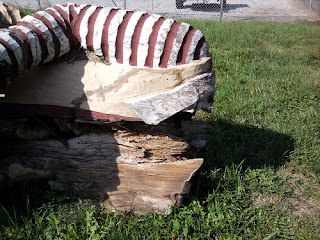 And not only did they take His FRAKK'N Head! 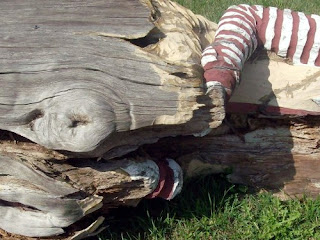 They also took His FRAKK'N Hands! 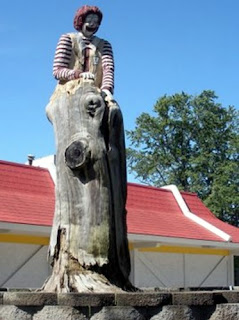 Wow. I'll be honest, we we're both pretty bummed out about this dastardly development. And, again, having seen way, way too many movies, we were worried about the high probability of some kind of fastfoodical retribution of a most bloodiest, special sauce kind. However, as we kicked it around and discussed it further, we realized that we were probably safe after sacrificing all those cheeseburgers. I hope. However, those naughty, naughty hooligans who took His Frakk'n Head and his Frakk'n Hands ... well, those guys are totally screwed.

That's crazy, I can't believe they just left it in the old lot to be vandalized like that. Or to let the head run off on its own and terrorize the town. Not that I'm suggesting anything.

I can write off taking the head as a college fraternity prank kinda thing (the U of I isn't that far off) but to take his head AND the hands. That is just messed up. Then again, you may have a point. Perhaps the hands are now off looking for the head as I type ... OOoOoOOOO scary keeds!

I just melt every time you talk Count Floyd to me.

BooOOooOOoOOoOowOOObwOOOOb. And stay tuned, keeds, as next time I'll relive getting tongued by a giraffe at the Kansas City zoo. In 3-D! Until then, HooOOOOOWWWWLLL!