YouTube Finds :: Do You Dare Face the Terror that Awaits You in the Darkroom? 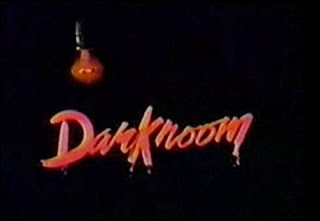 "You're in a house. Maybe your own. Maybe one you've never seen before. Do you feel it? Something evil. You run, but there's no escape. Nowhere to turn. You feel something beckoning you. Drawing you into the terror that awaits you in ... the Darkroom!"

Like a lot of folks of my age strata, the only clear memory I have of ABC's Darkroom is the episode where a son's plastic army men come to life and attack and kill his father, which had less to do with the allegorical tale on the horror of Vietnam brought home and more to do with an obsession over my old Marx Battleground playset. And it was these fleeting memories that drew me in for another look after stumbling upon the series when I fell down a YouTube hole a few days ago. 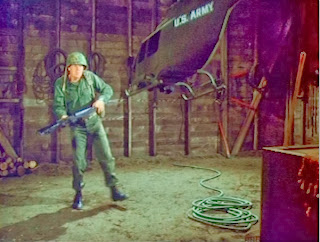 Often compared to The Night Gallery, the nastier and far meaner Darkroom owes more to the old EC horror comics of William Gaines and Al Feldstein, like Vault of Horror or Crime Suspense Stories. The brainchild of William Sackheim, he envisioned an anthology series based on a photographer recounting the tales of certain photos as he developed them. Sackheim then took it to producer Peter Fischer, who eventually sold the series to a ready, willing and able ABC. Seems the network was looking to cash in on the resurgent horror boom spawned by Friday the 13th and its imitators. 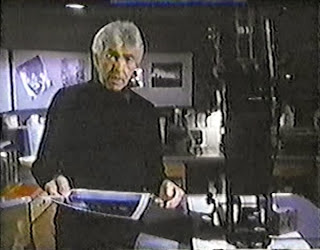 With James Coburn serving as our sinister master of ceremonies for each tale of regret and woe witnessed, after an opening credit sequence that could give anybody the drizzles, I was kinda amazed at the lack of moralizing found here; and how cynically downbeat and gleefully brutal the series was. 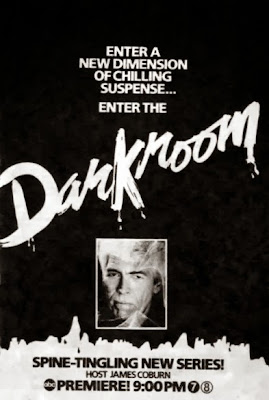 For, seemingly with each and every episode, someone, whether they deserved it (the murderous biker in 'Catnip', the evil pimp who picked on the wrong granddaughter in 'Needlepoint') or not (the girl who cried vampire in 'The Boogeyman Will Get You', the poor stranded motorist who gets fed to a monster by some old coot in a glorified pick-pocketing scheme in 'The Partnership', and even the dad who is killed by his son's toys in 'Siege of August 31'), met a dire and fairly gruesome fate by the end of each story. 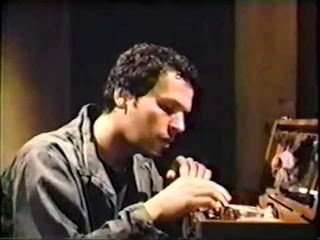 The only episode that didn't end horribly was 'Make-Up', where a young hood (Billy Crystal) comes into the possession of an old actor's make-up case, which magically bestows on him the traits of the characters on the labels, allowing him to take revenge on the gangster who double-crossed him. 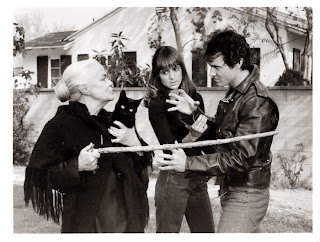 I kept seeing Robert Bloch in the scriptwriting credits, and I saw Paul Lynch (Prom Night, Humongous), Rick Rosenthol (Halloween II) and Curtis Harrington (Night Tide, The Killing Kind) both more than once as director. There was also an amazing amount of star wattage, including David Carradine (who got fed to that monster), Helen Hunt (as the girl with vampire issues), Brian Dennehy, Ronnie Cox, Gloria DeHaven, and Samantha Eggar, and a metric ton of character actors and familiar TV faces leavened into this thing. 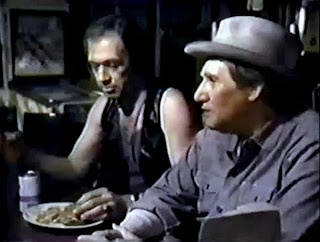 Alas, from the very beginning one could sense Darkroom wasn't destined to last very long. Before the cameras even rolled there was already trouble just getting the scripts past the censors. And those that did brought on a rash of complaints from viewers and parent groups who found it too intense and unseemly. Thus and so, quickly proving itself to be unsustainable due to standards and practices issues and budgetary woes, the series only lasted for seven episodes, airing between November of 1981 through January 1982, with a grand total of 16 vignettes of varying length spread out between them before it was yanked off the air -- which explains the decades long confusion since it first aired where people mistakenly thought there were 16 episodes when there were only seven.


However, the show briefly returned from the dead one year later. Turns out ABC would not allow several filmed vignettes to air, deeming them too nasty; and so, instead of just junking them, these were expanded and repackaged for a theatrical release, Nightmares (1983), which, as you remember, featured Emilio Estevez contracting Pac-Man Fever and getting sucked into a video game and a fairly hysterically-executed superimposed rat terrorizing another family. 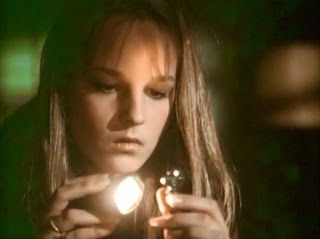 Probably nowhere near as interesting as I'm making it out to be, but, no matter how misguided things got, I still dug the hell out this revisit to the Darkroom. Turns out I was remembering the series better than I thought, too. I had just misremembered a couple of stories as belonging to Tales from the Darkside or the Alfred Hitchcock Presents and Twilight Zone reboots -- two series where a good chunk of of the creative force behind Darkroom wound up landing when the lights came on at ABC. There's even a couple of episodes that probably rate further exploring with their own individual write-ups. Hrrrrmmmm. Someday, maybe. And the whole shebang is out there, floating around YouTube if you care to take a look and judge for yourselves.

Congratulations! You have been nominated to recieve The Sunshine Award by....well, me! I hope that you enjoy and cherish this most prestigious of Blogger Awards...

Cool! Much appreciated. And thanks!