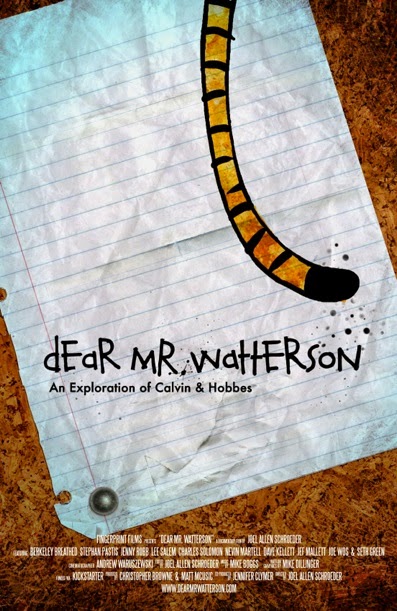 Well, turns out Dear Mr. Watterson (2013), a documentary on the creator of the much beloved Calvin & Hobbes comic strip, was not the worthless fan-lip-service-circle-jerk that I both feared and was led to believe. 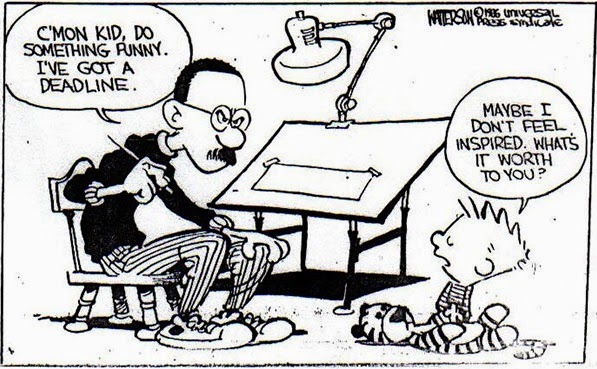 No, the notoriously elusive and reclusive cartoonist does not participate, but documentarian Joel Allen Schroeder does the next best thing by compiling a ton of interviews with the artist's contemporaries, his syndicators, cultural historians, comic art curators, and yes, fans, who discuss the cultural impact of the strip, the history of the medium, the dire straits of newspaper comics today, and speculate on Watterson's cantankerous merchandising decisions, meaning the complete lack of any, and why he pulled the plug nearly twenty -- yes, TWENTY -- years ago after a ten year run of brilliance and basically disappeared. 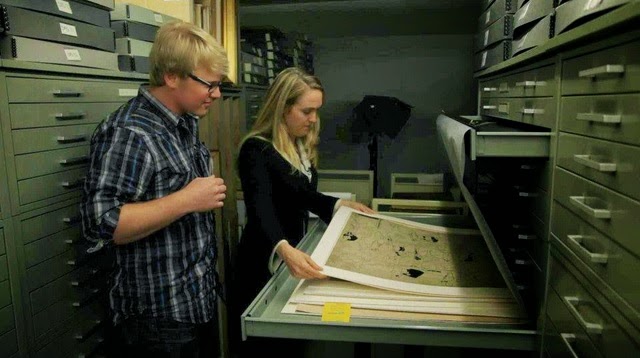 Even the framing device of the filmmaker's navel-gazing reminiscing works as he digs into Watterson's history, skirting the line between stalking and fact-finding, as he relates his own relationship to the strip (I chuckled how his mother admits she wouldn't let him read it at first due to Calvin's destructive tendencies) and visits the creator's hometown of Chagrin Falls, Ohio, and digs up some of his early high school and college work, and later unearths several of his editorial cartoons from when he briefly worked at the Cincinnati Post, which all show the evolution of his craft. But Schroeder takes it no further than that, respecting his subject's decision to be left alone.

Calvin & Hobbes ended before I started working at a small micropolitan newspaper back 1996. And as my job evolved over the years since then, one of the responsibilities I've inherited is building the daily and Sunday comic sections, which isn't nearly as romantic or cool as you'd think in this digital age of drag and drop. Folks still care care about them (-- judging by the phone calls received if I mess something up), but they ain't what they used to be as papers shrink and strips shrivel like Shrinky-Dinks to save money. I seldom read the dailies, but the Sunday section is still as vibrant as ever. (If you're not following Zits, you should.) 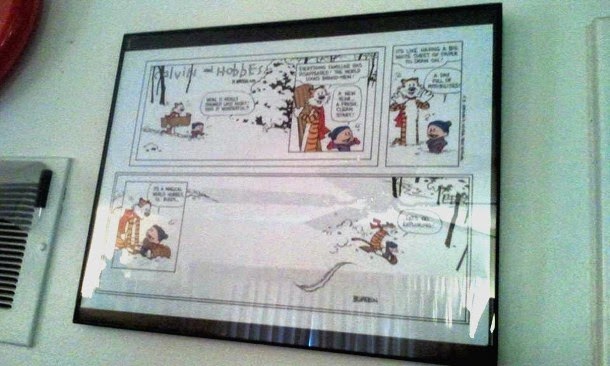 And if you will allow me one more relevant personal note, of all the vintage toys, boxes of comics, books and vids cluttering up my house, my most prized possessions is an autographed copy of Watterson's last Sunday strip, given to me by the managing editor for some editorial cartoons I did for him. 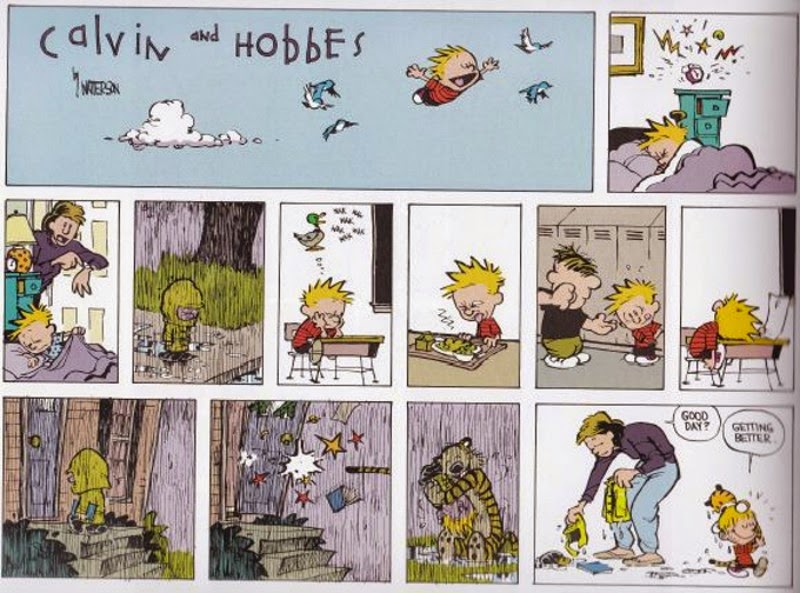 Admittedly, Dear Mr. Watterson works best when it's not dealing with the fan-gush, with people basically regurgitating up their favorite strip but seldom slowing down enough to say why. (My favorite is pictured above.) But I think that gets to the heart of why Watterson refused any offer to merchandise his creation. Without this dilution of product, the strip remained small and personal and left to each individual interpretation. Not some ad executives'. Not some voice-over actors' from a non-existent cartoon. And definitely not from dropping trou' and relieving yourself on some corporate logo. 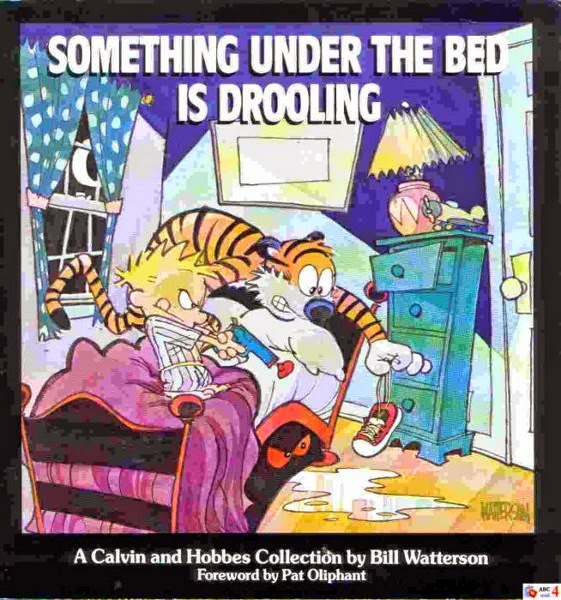 If nothing else, this documentary prodded me to dig out my old and worn out C&H compendiums, their spines long cracked and broken, but untouched for -- wow, since I last moved nearly 15 years ago. Polished off Calvin & Hobbes and got about half-way through Something Under the Bed is Drooling before I realized that all of Watterson's shrewd marketing decisions were not the actions of a control freak but an attempt to keep things pure and simple. As pure and simple as ink on paper and where your own imagination takes you from there. 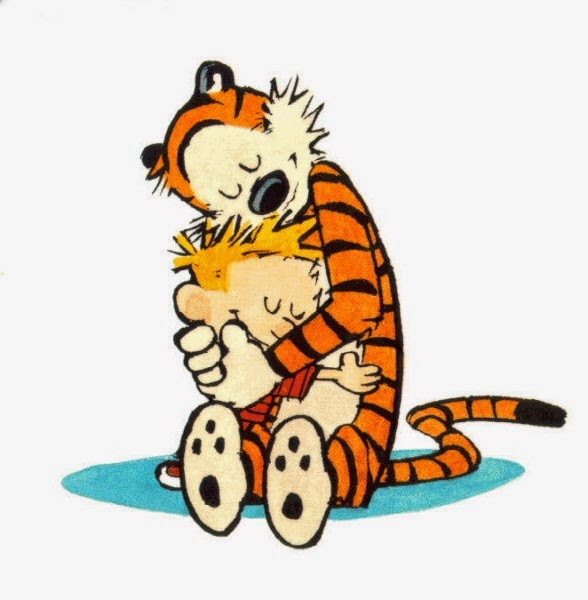 And so, if you were a fan of the strip, and I've yet to meet anyone familiar who wasn't, give this doc a whirl. And with that, I let the The Beatlesøns play us out. Feel free use the lyrics provided below to sing along. 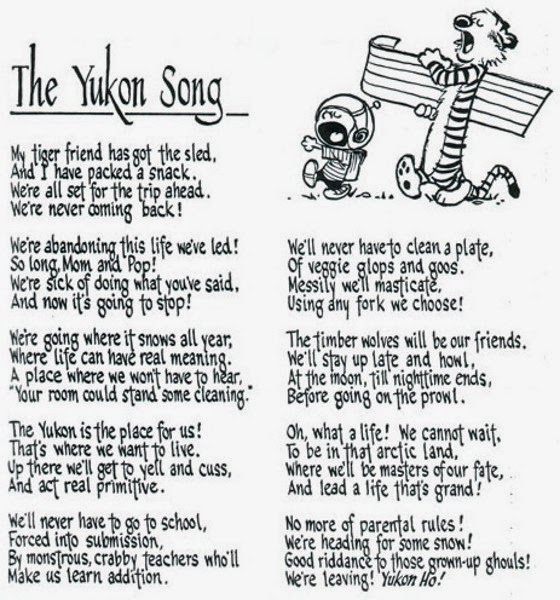