The Fine Art of Sequential Credits :: You Know, I Think the Tide Was With Them in Steven Speilberg's JAWS (1975)

There. Did you see them? Way back in the background? No? OK. How about now:

Yeah. That's one of my favorite throwaway bits in JAWS (1975); how, behind the closing credits, we actually get to see Brody and Hooper make it to shore before we fade to black. Sure, it's a little easier to see them in these vidcaps we can zoom in on without the distraction of the credits fading in or out or rolling by, or the fact that we'd probably stopped the disc already or were making our way to the exits as John Williams wistfully serenaded us out of the theaters, too oblivious to even notice. But there they are. They made it. They officially survived the last voyage of The Orca and lived to tell a whopper of a sea tale.

I was kind of surprised on how many people failed to notice or realize this whenever I bring it up. And to be fair, I really never noticed it either until I saw JAWS on the big screen again a few years back, some thirty years after I first saw it in the theater back in the 1970s, a tale I will get to some day, promise, and picked out the moving specks in the background, realized what they were, smiled, sat back down, and watched on until they reached the shore. Didn't take long, but it was worth it. 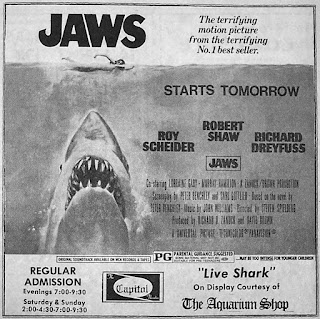 I have no idea when this scene was shot for the movie. But I can almost guarantee you that is NOT Roy Scheider and Richard Dreyfuss kicking their way ashore in that final shot. Though I kinda wish it was. And while I'd like to think this was the final shot, the last thing in the can, a cathartic, finally made it moment for Spielberg and co. after the grueling five month shoot, odds are it was an early second unit pick up while they were waiting for the screenplay to be written or, more than likely, it was something to shoot while the temperamental shark mock-up was malfunctioning. Again. Still, I think it's a pretty cool final coda and a nice little secret toy surprise -- once you finally notice it. 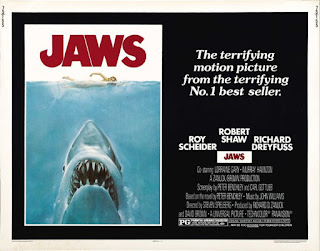