To help pass the holiday doldrums and celebrate the complete annihilation of my car last week (and to give my keester a little dry-run stress test before B-Fest), I settled in for an all day/most of the night marathon of disaster movies (-- it just seemed appropriate.) 20 straight hours of pure cinematic catastrophe -- and it started accidentally when I tuned in Turner Classic Movies and caught the opening credits for Airport -- the film that started the "We're Doomed and totally Screwed" genre that flourished for the next decade before it sputtered out in the early '80s. (Later revived by the likes of Bay, Devlin and Emmerich in the late '90s -- but, please, give me Irwin Allen any day.) 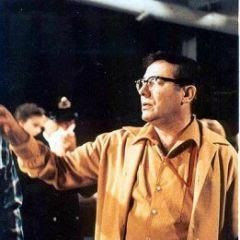 Most people credit Irwin Allen with the creation of the disaster movie (and they also mistakenly think he was behind the Airport franchise). Being the natural contrarian that I am, I'll give more credit to author Arthur Hailey. I think the roots of the modern disaster film can be traced back to a teleplay Hailey did back in the '50s called Flight to Danger, later remade theatrically as Zero Hour (and then spoofed into oblivion by the Zucker's Airplane!) This and his novel, Airport, set the template for love triangles, matrimonial humps, geriatric comedy relief, and disasters that exponentially got worse and worse as the minutes tick by until by some miracle or dogged perseverance the day/plane/mankind was saved. 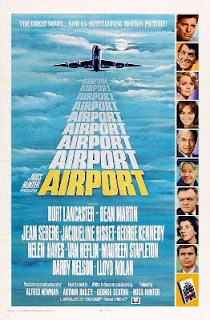 Airport opens with the titular locale being pummeled by a snowstorm. Burt Lancaster runs the show and from a stuck plane blocking a runway, to noise complaints from the neighboring subdivisions, to the fact that Van Heflin has smuggled a bomb on board a flight to Italy to cash in on a Life Insurance policy for his destitute family everything seems to be going wrong.

And while swinging pilot Dean Martin takes time out from knocking up stewardesses to try and land the crippled plane, on the ground, George Kennedy -- the patron saint of disaster movies, hell yeah, Patroni will save us all! -- red-lines things to get the much needed runway clear for an emergency landing or the the tarmac will be littered with the corpses of every Hollywood actor and actress over the age of 65. 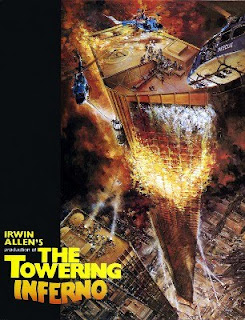 Next up comes my all time favorite -- The Towering Inferno, where we find out what happens when you cram 135 floors of steel and glass with polyester, tafata and every flammable accelerant known to man. Paul Newman designed it, William Holden built it, and then Richard Chamberlain screwed it all up, so now it's up to Steve McQueen to save all their sorry asses. And I try not to laugh while Newman and McQueen set the charges to blow the water tanks, when they pause to look each other in the eye, and I burst into a lively rendition of "We May Never Love this Way Again..." (And for those of you playing at home, this is the Love Theme from The Towering Inferno , used ad nauseum whenever two love leads express their affections for each other before one or both of them is turned into a charcoal briquette.) 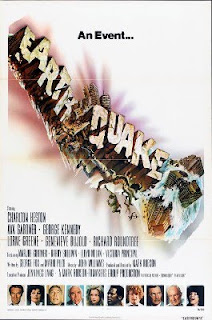 And you wanna know something? I think Los Angeles was lucky that the Richter went off the scale in Earthquake, leveling most of the city. Why? It left little or no furniture or scenery lying around for Charlton Heston, Ava Gardner and Marjoe Gortner to rip apart with the bare teeth.

To me, Earthquake is easily the weakest entry but it was also the apex of the genre -- it truly is an awful and laughable film-watching experience; it distilled the disaster movie back to its basic elements and the results is a very sour mash. The disaster movie was never the same again, and things quickly went downhill in a helluva hurry. But I still giggle, though, whenever I ponder how in the hell we were supposed buy Lorne Greene as Ava Gardner's father. (She appears to be at least thirty years his senior.) Who knew she was the lost Cartwright brother? 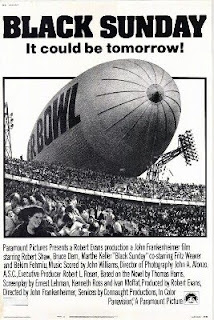 Next comes Black Sunday where Bruce Dern plays a deranged vet -- as only Bruce Dern can do a deranged vet, who is recruited by some terrorists to crash the Goodyear Blimp into the Orange Bowl during Superbowl X and detonate a bomb filled with ball bearings to aerate the crowd. Crusty Robert Shaw manages to untangle the plot and saves the day.

This one was a little more serious than I remembered and kinda derailed the mood, to be honest, so I took the opportunity for a much needed bathroom break and food run, but I made it back in time for the climax. And, for the record, Pittsburgh was beating Dallas 21 to 10 before things went awry. 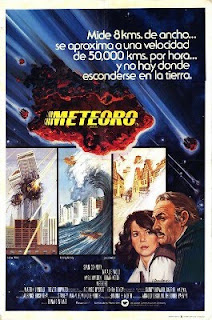 Recharged by a couple of Taco John's grilled burritos and a gallon of Diet Dew, we jump back in with both feet, ready to duck and cover with American International Pictures last gasp, Meteor. Part disaster movie, part Cold War parable, Sean Connery, Karl Malden's hair piece, and Natalie Wood manage to bring detente with Rooskie Brian Keith to allow a joint attack on Orpheous -- the Texas sized rock plummeting right for us. Fragments have already struck the planet (-- allowing me to see part of Avalanche) until two orbiting "Peace Platforms" armed with four-dozen tactical nukes are linked up and launched, providing just enough TNT to get the job done.

Ever wonder where the "Star Wars" defense initiative was born? Could be here (-- and I can't help but wonder if the late Ronald Reagan had a hard on whenever he watched this movie.) 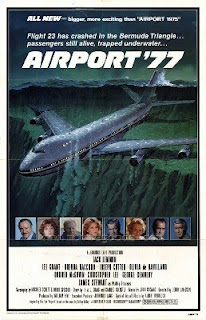 We venture back into airline disasters with the next flick -- Airport '77. I once composed a poem dedicated to Airport '77, and I think I'll repeat it here:


Wet Disaster
Lost in the Bermuda Triangle
Plane in the Water
Glub. Glub. Glub.
Petroni on the Prod
Red-Lining.
Yup, this is the one where the plane crashes into the ocean. Jack Lemmon's slumming, Lee Grant's gnawing on the seats, and Christopher Lee's cashing a paycheck. But, the real problem with this movie, as much as I love Darren McGavin as the flight engineer, the film needed much more than a five-minute Patroni cameo.

And that about wraps up the more conventional disaster movies that I have in my video library -- explaining the unforgivable absence of The Poseidon Adventure and Airport '75 (-- and, no, I'm not forgetting Airport '79; even I have my limits). So, we move on to the little less conventional. 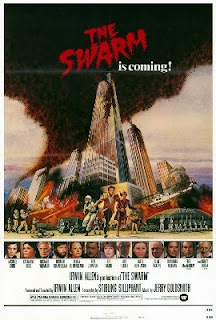 Irwin Allen makes a welcomed return as The Swarm eases us from conventional disasters to nature gone amuck. Allen and his long time collaborator, screenwriter Sterling Silliphant, gleefully forewarn us of the ecological threat of KILLER BEES by killing off as much of the cast as possible.

Good grief ... I was around during the initial KILLER BEES scare back in the '70s, and believe me, all the KILLER BEE films spawned by said scare were more detrimental to my health than any bee sting imaginable. In the end, Allen rips off an old school killer bug movie -- Beginning of the End -- with a false mating call, promising the KILLER BEES a little KILLER BEE nookie, only to lure them into the ocean where a butt-load of napalm is waiting. (And who got to fill out the environmental impact statement on THAT stunt.) 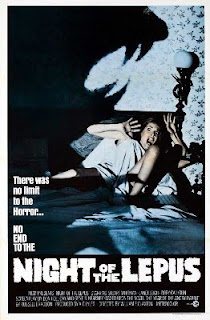 And our smooth transition runs right into a brick wall with the next eco-disaster flick -- Night of the Lepus.

The sheer absurdity of this movie is something to behold. The plot is a fairly generic '50s science fiction retread, and even the same styled gonzo-effects are lovingly recreated with the use of live bunnies made to look giant-size by having them bounce around miniature sets and amping up the thundering paws on the soundtrack. Believe me, that's nothing compared to the man to varmint hand to hand combat scenes using a stunt-man in a really bad bunny suit.

You just can't make this shit up.

As we approach hour 19 in this "seemed to be a great idea at the time" endeavor, I weigh the options between putting this marathon out of it's misery by either watching Grizzly -- an almost verbatim, scene for scene JAWS rip-off, only this time with a really big bear -- or Attack of the Killer Tomatoes. 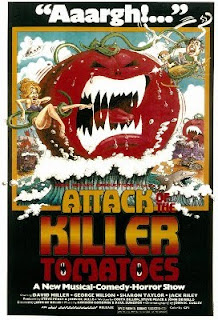 Tomatoes won, mostly because it was shorter and I was running out of gas.

Fast and quick: tomatoes have become sentient and homicidal. All part of some government conspiracy that is eventually broken up, thanks to the work of Mason Dixon (-- imagine Doc Savage as the Man of Bologna) and his field agents. Man, it's gonna take a while to get that #&*@ "Puberty Love" song outta my head.

Personally, I think Attack of the Killer Tomatoes is a lot better than people give it credit for. Aside from the nifty theme song, it actually made me laugh out loud on several occasions -- when it was actually trying to be funny. ("Anybody got any ketchup?" C'mon, that's funny.) No small task in these purposeful spoofs.

And that about wraps it up. That's it. I can't takes no more. So, until next year, time for bed.

Happy Holidays all.
Or Bah! Humbug where applicable.