You Don't Have to Be Crazy to Like this Movie, but it Will Help :: A Beer-Gut Reaction to Breck Eisner's The Crazies (2010) 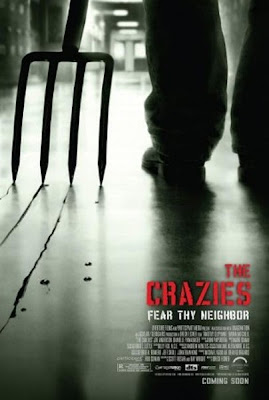 ___ ___ ___ ___ ___ ___ ___ ___
As I settled into my theater seat and finished wading through the previews, when Breck Eisner's remake of The Crazies finally cued up, opening with a Johnny Cash tune over a scenic tour of bucolic Ogden Marsh, just like another Romero remake, I rolled my eyes a little, and then waited for the flick to devolve into a zombie-apocalypse knock-off that would take me to places that I assumed, from the trailer, the movie would take me (-- that I didn't necessarily need to go again). And I waited. And waited...

Long story short, the film never went there exactly. Here, a military transport plane crashes into a lake in rural Iowa, inadvertently infecting the nearby community's water supply with a biological viral weapon, Codenamed: Trixie. As the infected townsfolk start to lose it and lash out, leaving several dead bodies in their wake, the local sheriff, his deputy, and his wife, the town's doctor, are soon overwhelmed but are unable to raise any outside help as the whole county appears to be completely shut-off and bottled up by those who lost that plane in the first place. And if we all remember our Romero 101, as usual, these containment protocols breakdown completely, and the infection starts to spread unabated.

Thinking back on it, I'm hard pressed to recall a scene where the infected attacked en masse after the initial break out at the high school. Two or three at a time, maybe, but that was it. So, if that's what you're looking for, look elsewhere. Once the shit hits the fan in this flick, out attention is focused on our quartet of survivors, who may or may not be infected, who make their way through the carnage after the fact, mostly, dodging both the lingering Crazies and the Black-ops military unit called in to contain and clean things up by taking a page from Uncle Joe Stalin's Scorched Earth Handbook. Unlike Romero's original, however, the story is told only from the townfolk's point of view, leaving the satirical and allegorical look at the government's boneheaded plan and overall unpreparedness for such a situation by the wayside, summing it up with some sneering Haliburton exec belching out "We just lost a plane. What else do you want me say?" (Though the deputy's answer to this had me cheering.)

There are a few outstanding, high-tension set-pieces, but again, the trailer gives most of these away. And there were also a couple of laughable set-pieces that just didn't work as intended. Still, aside from a few geographical anomalies, I think Eisner and cinematographer Maxime Alexandre did a fantastic job of capturing "The Big Open" and the isolating, endless horizon feel of the Great Plains; and if he makes one tactical error it may be that we didn't get to see enough of that carnage as it happens.

In the end, The Crazies is by no means a great film. It's nothing you probably haven't seen before, but thanks to a strong cast that helps us identify with these characters more than we ought to, thanks to a sketchy script, we've got ourselves a decent, if unspectacular remake. 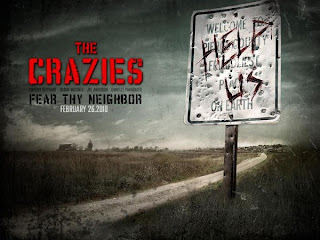