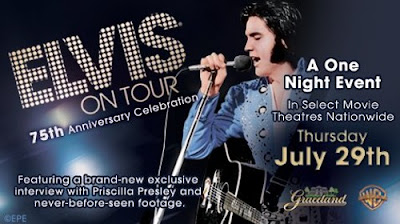 "This one night event will feature much of the last film footage shot with Elvis, a specially produced, exclusive retrospective from Priscilla Presley, and never-before-seen Elvis footage. More than 25 numbers spotlighting Elvis Presley’s talent, range and showmanship fill this lively chronicle of his multi-city 1972 series of concerts. Plus montage sequences (supervised by Martin Scorsese) showcase Presley’s early career in music and movies. The unique split-screen presentation conveys the whirlwind, “you-are-there” energy and performance thrills of Elvis on Tour. The result of this different look at the King of Rock ‘n’ Roll™? Fan euphoria – and a Golden Globe® for Best Documentary."

More Info :: List of Participating Theaters
This one time event will be held on Thursday, July 29th, 2010. 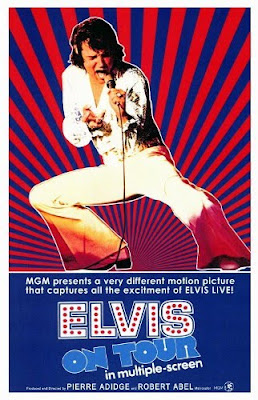 Email ThisBlogThis!Share to TwitterShare to FacebookShare to Pinterest
Labels: Documentaries, Elvis, Elvis on Tour, Heads Up