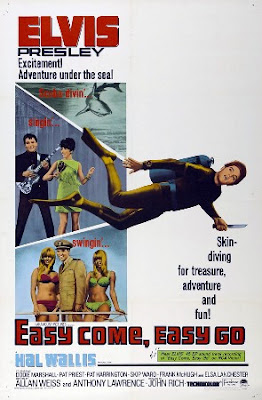 One of the things I always look forward to at the beginning of every new year -- after the hangover wears off that is, is to celebrate m'man Elvis Presley's birthday by taking a look at one of his fine, fractured forays into feature film. Producer Hal Wallis had a hand in a ton of these things -- usually used for some quick cash to bolster his other productions; and here, kicking off just the first of three films The Big E walked through in 1967 ( -- the others being Double Trouble and Clambake), was this tale of Navy Frogman Ted Jackson, who accidentally stumbles upon some sunken treasure on the last day of his enlistment while trying to deactivate an old underwater mine. 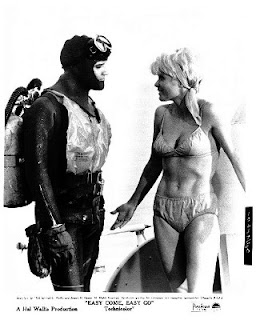 And once his gig is up, with a little help from his best pal and some diving equipment rented from the kookie father of the inevitable loopy love interest, he efforts to salvage the gold. Of course, a disastrous chain-reaction of misunderstandings soon has these lovebirds at odds and on the outs. Will they be able to reconcile before a couple of pirates sneak in and steal the treasure out from under them? 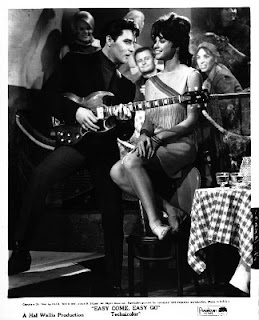 You know, it was while digging up some artwork for this update that something hit me: Somebody really needs to come out with a line of Elvis Presley action figures and accessory kits based on his movie characters. I mean, you could have Rodeo Elvis [Tickle Me], Scuba Elvis [Easy Come, Easy Go], Combat Elvis [G.I. Blues], Chopper-Pilot Elvis [Paradise, Hawaiian Style] or Racer Elvis [Speedway]. Hell, he's already got a built-in kung-fu grip. Seriously, this guy was a walking G.I. Joe doll, cinematically speaking -- all you had to do was just change the uniform, plug him into the same script on a different playset and there ya go -- about 85% of his movies. 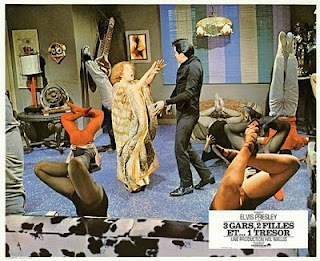 In the end, that's all Easy Come, Easy Go is: just another rehash of the same hi-jinx and general foolishness. But, sometimes that's all we come for and all we ask. And besides, this film contains the absolute zenith, the pinnacle for all perpetuity, the most absurdest buffoonery ever befallen, the most absolute gob-smacking brain-bending smack-down to ever occur in cinema ... a dueling duet between Elvis and Elsa Lanchester. That's right: the King of Rock and Roll vs. the Bride of Frankenstein in a little number I like to call "Yoga is as Yoga Does."

Oh, mama ... That is a whole six-pack of awfulsomeness. 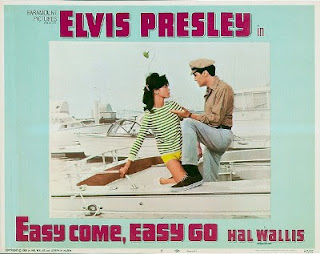 OMG was this awful. Didn't even like them when I was a kid.

Hereby nominated as the best word ever.

KT & Friend: Not his greatest, no. But, I still love every gawdawful minute.

Stacia: I hope it wins. And glad to hear you're feeling better. Keep on keep'n on in that department, please.