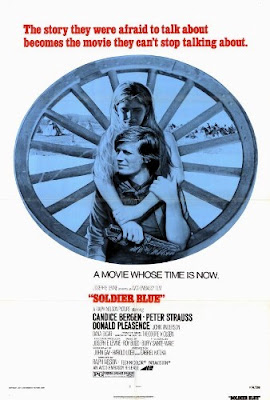 When an Army payroll caravan is ambushed by a group of hostile Cheyenne Indians and wiped out, the only survivors, a young cavalry private (Strauss) and a recently liberated captive (Bergen), must make their way through hostile terrain to the fort by avoiding the hostiles and conquering the lingering hostility between them without being killed or killing each other. And as our oil-and-water couple draw closer to their goal, and are drawn closer together, outside forces threaten to tear them apart as the film comes full circle and culminates in another, senseless tragedy. 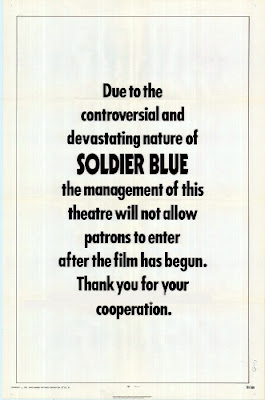 Director Ralph Nelson made his bones on the small screen during the high-pressure stakes of live broadcasting, with lofty credits that include episodes of The Dupont Show of the Month, Climax!, and Playhouse 90; the latter of which earned him a much deserved Emmy when he collaborated with Rod Serling for Requiem for a Heavyweight. Nelson then made the jump to the big screen when producer David Susskind tabbed him for Columbia Pictures' theatrical adaptation of the same screenplay. More films followed, and, like his former TV partner, Nelson gravitated toward projects that threw a glaring spotlight on society's ills. Nelson, himself, financed Lillies of the Field (1963), an earnest but fluffy film, which won Sidney Poitier an Academy Award, that might leave folks scratching their heads over what all the hub-bub was about when it was first released is, I think, a not so sweet and fluffy indictment on the state of racial relations in this country circa 1963. 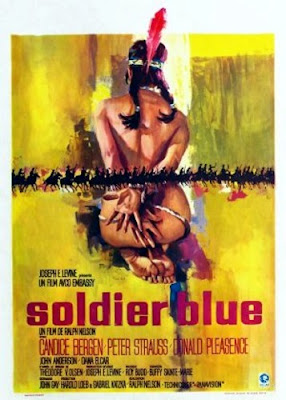 Sticking with the theme, Nelson teamed up with Poitier again for the criminally under-appreciated oater, Duel at Diablo (1966), where the color lines are blurred even further with the story of a white woman (Bibbi Anderson), who spent several years as an Apache captive, who is ostracized upon her liberation as defiled goods -- better dead than red, if you catch my drift -- and who is also equally shunned by her former captors when she tries to return and reunite with her half-breed baby. ...tick...tick...tick (1970), meanwhile, is a high-tension timebomb ready to blow when a newly elected black sheriff (Jim Brown) takes office in a racially divided southern town, with the mayor (Fredric March), the deposed sheriff (George Kennedy), and the KKK questioning and countering his every move. 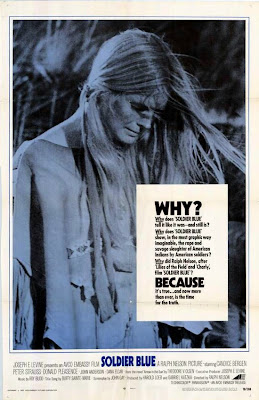 Soldier Blue is more of the same, where, once again, Nelson makes the audience look in the mirror to face man's inhumanity toward his fellow man based solely on the 3-Cs: color, culture and Creed. Based on Theodore V. Olsen's novel, Arrow in the Sun, Soldier Blue is less of a revisionist western and more of an allegorical and timely tale on the horrors of the Vietnam War. By the time of the film's production the truth was finally filtering out about the events surrounding the notorious Mỹ Lai Massacre in 1968, where a company of U.S. soldiers wiped out a village of Vietnamese civilians, mostly women, children and the elderly without just cause. As the cover-up was torn apart and details of the brutality that took place that day leaked out, with horrid tales of rape, torture, and mutilation, this travesty proved eerily familiar to a similar blot on the American military record books that happened nearly a century before, where a detachment of militia wiped out a village of friendly Cheyenne and Arapaho Indians in the same fashion near Sand Creek, Colorado; which, by the way, is the major incident on which Olsen's novel is based. Coincidence? I think not 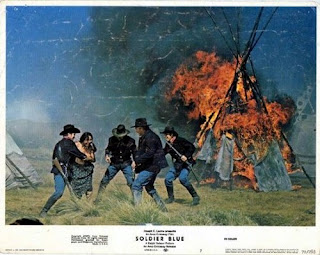 Gender roles also take a thorough throttling with our frontier odd couple. Here, sticking with the Vietnam allegory, Bergen's foul-mouthed Cresta Lee comes off as a proto-Murphy Brown. Radicalized, she has tuned in, dropped out, and returned to nature, an ersatz Cheyenne Jane in buckskins; and it's her skills, instincts and intuition that keeps them both alive. I do find it interesting that it's never made clear how she came to be liberated in the first place. Was she rescued? From what little info we do get we glean that she left the tribe voluntarily because even though she may look like an Indian, talk like an Indian and act like an Indian, she wasn't. However, it quickly becomes clear as she slowly strips off her new dress and accoutrements as to where she really belongs, metaphorically speaking. Strauss' Honus, on the other hand, is very prudish, effeminate, quick to tears, and clings to archaic notions of civility and religion that are both painful to watch and painfully stripped away at every turn. And it's these very notions that tend to get our couple into trouble. Of course, then, they're destined to fall in love, as Honus finally sees the light. And, like in most of these allegorical tales, it only took the deaths of hundreds if not thousands of people to get that point across. 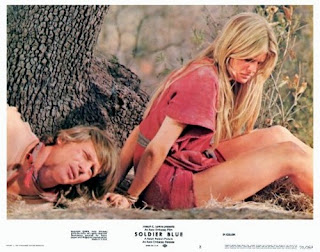 Though preoccupied by its message and book-ended by two graphic massacres, Soldier Blue does have its moments of levity and humor. I especially love the moment when Honus is more interested in covering Cresta's exposed derriere than chewing through the ropes binding her hands after they're captured by the gun-runner. There's more, but, sadly, not enough to balance out the scenes where Nelson beats the audience around the head and neck with the Mighty Clown Hammer of Morality. Thus, by the time we reach the bloody conclusion at Sand Creek, with the raping and the pillaging and the dismemberment, I fear the audience might not be listening anymore. For in the end, Nelson might have been aiming for our hearts and minds, but, instead, hit bulls-eye on our collective upset stomach. 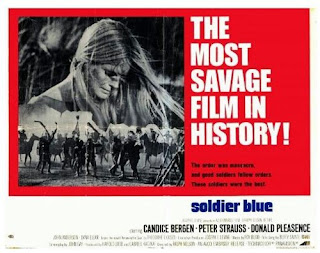