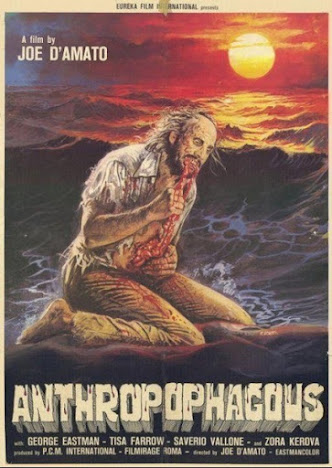 We open quite gruesomely on a remote Greek island, where two tourists meet their untimely end on the beach; she's attacked from below the water and shredded in an occluding plume of blood, while he gets it on the sand, rather bluntly, with a meat-cleaver to the noggin. Crash-cut to the mainland, where a young woman named Julie (Farrow) is sweet-talking her way onto a sailing charter, convincing them to give her a lift to the very same remote island when her own ride fails to show.

Now, this island in question is barely inhabited: a small fishing village / cum tourist trap, a few summer villas, and that's it. Seems Julie was to house-sit for some friends there and keep an eye on their blind teenage daughter, Henrietta, while her parents go on vacation. Thus, rounding out this group of potential victims are Andy (Vallone) and Daniel (Bodin), Arnold (Larson) and his pregnant wife, Maggie (Grandi), and lastly, Carol (Kerova), who gives a cold shoulder to the newcomer -- mostly due to her latest tarot card reading, which shows death awaits them all at their new, detour destination. 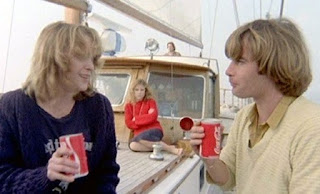 Well, turns out there might be something to Carol's prognosticating abilities as the troupe arrives at the island but finds the village oddly deserted, with the only proof of life a spectral blond in black, who refuses to speak to them and constantly disappears. But! She has left them an emphatic warning smeared in the dust on a window: Go Away. Further searching turns up a trashed telegraph (-- the only form of communication off island), and a body; a body that appears to have been partially devoured.

Meanwhile, back on the boat, Maggie, whose delicate condition kept her from exploring with the others, discovers the single crew-member's dismembered head in a bucket before being promptly attacked and drug off by whoever or whatever did this ghastly deed. Now, the others, concerned for her well-being, just missed this, returning to the beach to see the boat, and its radio, now drifting toward the open sea. But this is quickly and rationally written off due to an approaching storm and the vessel being taken to deeper waters to ride it out, destined to return once the squall passes. 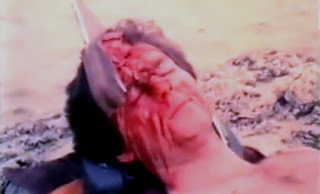 Stuck and thus, Julie takes them to her friend's palatial house, which proves just as deserted. But as night falls and the storm breaks loose, strange noises draw Daniel and Julie to the wine cellar, where they are promptly attacked by a crazed Henriette (Mazzantini), who had hidden herself in a wine barrel, who then stabs Daniel before the others can subdue her.

Once Daniel is patched up and the terrified girl is calmed down, she reveals her parents are dead and how some thing is loose on the island. Something evil. And unfortunately for our castaways, they're about to find out the terrified Henrietta couldn't be any more right if she tried -- and what really happened to all those locals... 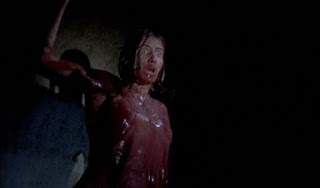 And while that title may conjure up images of a Neanderthal, it actually refers to ancient cannibals in a mythical sense, epitomized by Goya's disturbing painting of Saturn devouring his own children. 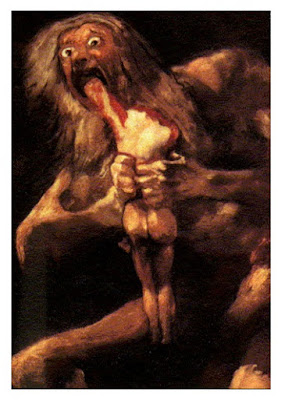 I wouldn't be surprised if Goya's work had influenced D'Amato in the making of this film, which began as something completely different. Apparently, the original script focused on a family of three cast adrift on a small life-raft after being shipwrecked at sea until the father goes crazy from hunger and accidentally kills the wife while trying to cut their child, who may or may not already be dead, into edible portions. And with that morbid nugget, D'Amato chucked the rest of the script and teamed up with his long-time collaborator, actor George Eastman, for a complete overhaul.

D'Amato and Eastman had first worked together on Michelle Lupo's spaghetti western, Amigo, Stay Away (1972), and according to several interviews since, the main thrust of their revisions were these two just constantly trying to gross each other out the most, which we'll get to in a second. 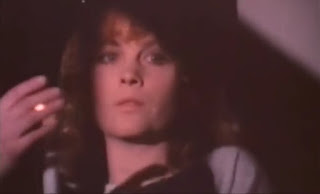 And with an eye on foreign markets, which were currently overflowing with the blood of Teenage Slashers and Body-Count pictures, the film started to take shape. Making the shipwreck the back story of the villain, the husband, Klaus (Eastman), now completely mad and insatiable, returned to the island and starts murdering and eating his way through all the inhabitants. (Picture a cannibalistic Jason Vorhees.)

Turns out that woman in black was his sister (Rey), who did her best to cover up his atrocities -- and stress on the ‘was’ -- for her conscience finally catches up with her at the end of a self-imposed hangman's knot. From there, the film holds few surprises as the deranged killer methodically stalks and kills these castaways, who find several diaries to piece it all together, setting up a final showdown between Klaus and Julie. 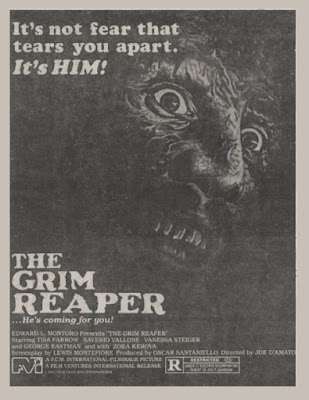 Okay, then, Anthropophagus, released in the States theatrically as The Grim Reaper -- and then released on video as anything from Man Eater to The Beast to Zombie 7 -- has garnered itself quite the reputation over the years, mostly for two reasons. The first being it was one of the inaugural "Video Nasties" that set off a firestorm of banned home videos in Great Britain in the early 1980s; and second, two very nasty kills, indeed (-- well, three if we also count Henrietta's), which got it on that list in the first place.

The most notorious, of course, is Klaus gynecologically pulling Maggie's unborn baby from her womb while strangling her, and then taking a bite out of the fetus (-- played by a skinned rabbit), while the dying Arnold looks on. And trying to top that atrocity we have the climax, where Klaus takes a fatal pick-axe rip to the stomach, which allows him to pull out his own intestines and then start munching on them as the film abruptly ends. Wow. 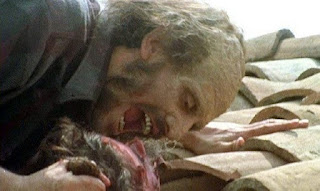 In both those scenes, D'Amato just let the camera roll and lets the audience see everything. (And they are both just as disturbing and tasteless as they sound. *bleaugh*) The director also managed to cull some creepy atmosphere from the surroundings, especially the scenes where they explore the abandoned village or Arnold stumbling into the crypt, where he is briefly reunited with his wife and then, GAH!

And there were a few outstanding tension set-pieces, too, with nods to Henrietta being unwittingly left in a darkened bedroom with the killer, and Julie's desperate flight out of a well during the climax, essentially hanging by a thread as Klaus gropes for her from below. 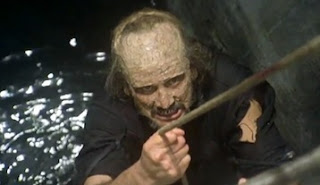 And all of that, combined with the isolating locale and nigh indestructible monster makes me believe this film owes just as much to Alien (1979) as it does Halloween (1978) or Friday the 13th (1980). But the film's biggest asset was Eastman, a large and imposing figure in real life, as our deranged killer. The scenes in broad daylight, despite some make-up gaffes, where Klaus relentlessly pursues his prey are top-notch.

This, of course, all helps to over-compensate for a plodding script that takes nearly 45-minutes to get rolling properly, a laughable whirling Wurlitzer soundtrack provided by Barnum ‘n’ Bailey, and a few more FX gaffes (-- that head in the bucket was pretty hysterical), which makes for a very satisfying and grisly Euro-Shocker. But, one has to wonder if it had been in more competent hands, with such a great premise, then, wow, we really could've had something here. 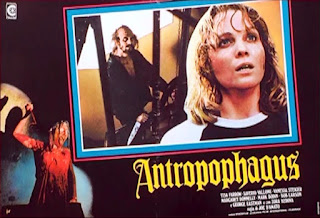