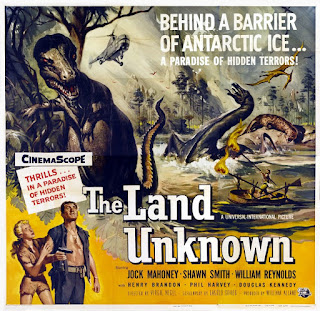 Open do we in Washington D.C. at a Naval briefing for an impending Antarctic expedition, where several teams of cartographers will use helicopters to map out the frozen continent, hoping to mark and perhaps stake a claim to any valuable resources like coal or uranium. One particular team led by Commander Hal Roberts (Mahoney) will be escorting a very special guest, PNS reporter Maggie Hathaway (Patterson). But things get off to a rocky start when the ice flows delay the convoy for nearly two weeks, leaving them only 28 precious days of sunlight before Antarctica goes dark for the next four months. 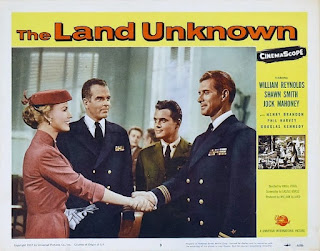 Roberts’ mission is to explore the strange anomaly of a warm lakes region where, thanks to some volcanic activity, the landscape is ice free and the water flows freely. But the helicopter and its crew of four, Roberts, Hathaway, the pilot, Lt. Jack Carson (Reynolds), and the mechanic, Steve Miller (Harvey), barely make it to their destination when they receive a message from the carrier to turn back immediately due to an unexpected storm. Things get even more harrier when the front moves faster than expected, and while Carson does his best to scoot around it they wind up lost in a heavy fog where, to the surprise of everyone, a giant Pterosaur flies out of the soup and smashes into them, disabling the rotor and the radio. With no other choice, the pilot descends for an emergency landing but all are shocked when the altimeter reaches zero but keeps on spinning, meaning they’ve dropped below sea level and still haven’t found the bottom. Also of note, the temperature has spiked nearly 130 degrees (from 40 below to 90 above.) When the fog finally breaks, Carson must do some fancy flying to avoid several tropical looking trees before landing the vehicle, luckily, in one piece.

In the good news bad news department, the radio still works with some minor repairs to the aerial and the rotor could just as easily be fixed – if they had the right equipment. But, having descended into what appears to be a deep volcanic crater, no radio signals are going out or coming in; and generating enough heat to straighten a vital metal rod is beyond their means. They do have enough rations for thirty days but the expedition will have pulled out long before then. So there only hope is to be rescued but the combination of being way off course and the fog cover makes that next to impossible. And just when things couldn’t get any more dire, Roberts’ speculation that the surrounding flora in this “Hell’s Chimney” resembles the Mesozoic era proves right when the prehistoric fauna in the form of a Tyrannosaurus Rex clomps out of the jungle and tries to eat them… 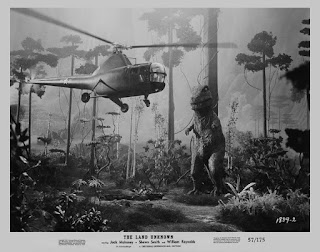 When Universal International first announced it was going to make The Land Unknown (1957), an unofficial adaptation of Arthur Conan Doyle’s The Lost World, the film was going to be another sci-fi epic of the same size and scope as This Island Earth (1955). It was to be produced and directed by their genre big guns, William Alland and Jack Arnold, the same tag-team that brought us It Came from Outer Space (1953) and Creature from the Black Lagoon (1954) and nearly every other UI creature feature from the 1950s you can think of in some capacity. It was to be shot in color, on location, and in CinemaScope with lavish F/X and an A-list cast. (Cary Grant and Veronica Lake were the big name rumors at the time.) But when This Island Earth failed to make back its production costs (and rival MGM’s Forbidden Planet did the same), the studio got cold feet and scaled the production back considerably, with the only real line-item on the budget to survive being CinemaScope. 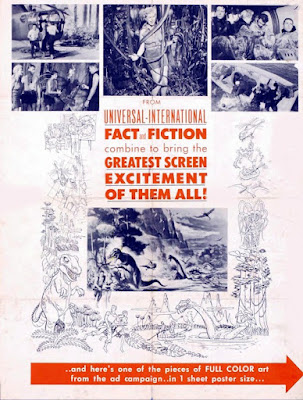 To me, the color was no great loss as I think the film looks much better and more surreal in glorious black and white. Same goes for the scrapped location shoot, as the giant indoor set, pool, and cyclorama by art director Alexander Golitzen resulted in a primordial wonder. (The constant fog provided by dry ice and baby bottle warmers hidden in nearly every fake tree.) But as the budget shrank the film suffered another casualty when Arnold lost interest and turned it over to his assistant, Virgil Vogel, whose only screen credit at that time was The Mole People (1956). Allan stayed on as producer but was hampered by the fact that most of what was left of the budget had already been blown on the F/X, namely two giant go-motion creatures that we’ll get to in a second. Meantime, the cast was filled out with stock players, led by Mahoney, a stuntman UI was bound and determined to turn into a leading man. Patterson (here billed as Shawn Smith) is both a knock-out and sufficiently feisty as several killer plants try to gorge on her. Both have good chemistry together and with Miller and Carmen, and I’m happy to report that neither of them are the comedy relief. And while the film does commit a lot of stock-footage abuse it is edited in quite skillfully and unobtrusively by Fred MacDowell and lacks the usual bombastic (and redundant) narrator to explain what we’re looking at. 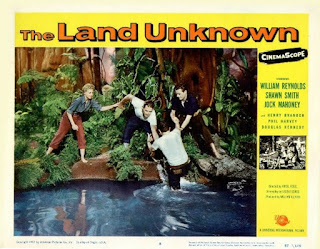 The small cast is rounded out by Henry Brandon as Dr. Carl Hunter, the (presumed dead) lone survivor of a similarly ill-fated marooned expedition from several years before. Now, being alone for that long and in constant danger has left Hunter a few cans short of a six-pack and extremely anti-social. (The new castaways had found evidence they weren’t alone; a wrecked camp, missing supplies, and several trails of human footprints.) And when not blowing on his conch to scare the dinosaurs away, Hunter is smashing their eggs in fairly smart play at self-preservation. He also doesn’t appreciate these others encroaching on his territory but desires Hathaway, in a biblical sense, and so, this ersatz caveman kidnaps her to *ahem* play Adam and Eve. When the others find him and rescue her, Hunter offers a deal. He’s aware of the part they need to make the helicopter work and he’ll trade the functioning one from his wreck but only if the men then vacate and leave the woman behind. 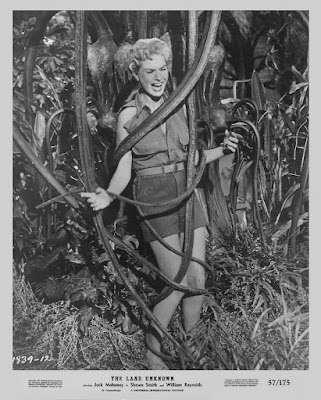 Despite his chilling warning of the coming seasonal darkness, Hunter is rebuffed and efforts are made to find the other crash site. But as the days eke past and the looming reality that the Navy fleet is about to set sail and leave them stranded there forever, Hathaway decides to sacrifice herself to Hunter so the others might escape. And so, she paddles a life-raft along the sulfur river toward Hunter’s cave, where she is attacked by an Elasmosaurus that has been hounding all of them only to be rescued by Hunter, whose honed dino-fighting skills are mighty indeed, and taken to his sanctuary. There, an equally crazed Miller tries to beat the crash location out of him but comes to his senses before he kills him. Then, Roberts makes one final plea to Hunter’s humanity, which works, and Hunter releases Hathaway and reveals where the needed parts are.

Once the chopper is repaired, it must survive one last attack from the pudgy T-Rex that walks like a man and then motors toward the river to pick up Hathaway and Hunter, who is currently battling that pesky Elasmosaurus again. Both are rescued rather thrillingly, and then the helicopter makes it out of the crater and contacts the retreating fleet. But their string of bad luck continues when their fuel is exhausted and they must ditch in the frozen sea. Luckily, the carrier was waiting for them and a standby rescue team pulls them all safely from the drink, leaving Roberts and Hathaway to make plans for a future together on the way home. 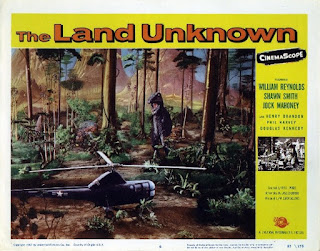 There’s an apocryphal story told by Ray Bradbury where he attended the premiere of a certain sci-fi film about dinosaurs and, when it was over, he approached the producers and berated them, saying their man-in-a-suit F/X stunk and the movie was destined to fail because they hadn’t hired his friend, Ray Harryhausen, to provide the monsters. Bradbury never revealed what movie he was talking about but I’ve often wondered if he meant The Land Unknown? (Odds are better he was referring to Unknown Island.) Personally, I think The Land Unknown gets way, way, way too much grief over its perceived failure to deliver reasonable dino-action. Fie! and *pfui* and shut your pie-holes, I say! Those practical go-motions dinosaurs were awesome and then some. 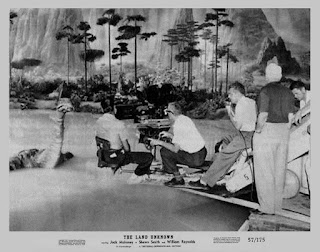 To realize these monsters, Vogel utilized nearly all of the above FX wise: a man in a suit (the T-Rex), giant mock-ups (the Elasmosaurus, the Pterosaurs and a killer plant), and matted-in monitor lizards (the *snerk* Stegosauri). The mobile T-Rex prop stood nearly 12-feet tall with its facial features and ginormous maw operated hydraulically (-- the hoses ran out of its tail). Look, I know it looks like a modified bowling pin with teeth in the photos but it is honestly quite the sight in action as it tromps around on the miniature sets (also courtesy of Golitzen). The Elasmosaurus fares better being partially submerged. Basically a giant pull toy, it ran along a track on the bottom of the sound-stage pool with animated flippers, neck, and jaws. The hydraulics used to make both monsters move work smoothly without the usual stop or start jerk. They were designed and operated by Fred Knoth and sculpted and built by Jack Kevan and Orien Ernest. Jimmy Dannaldson served as head lizard wrangler for the live critter combat. And all of their work was then patched into the film thanks to the optical effects work of Clifford Stine and Rosewell Hoffman, whose efforts are smooth and seamless and as nearly effective as their stellar work on Tarantula (1955) and The Incredible Shrinking Man (1957). 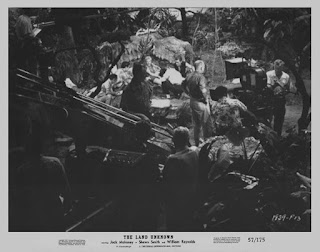 And it is there efforts, along with Vogel’s no-nonsense pace, likeable protagonists, and a wonderfully realized lost world that, to me, makes the besieged and belittled The Land Unknown one of Universal International’s most inexplicably under-appreciated creature features of the 1950s.

Poster campaign for The Land Unknown at the Archive. 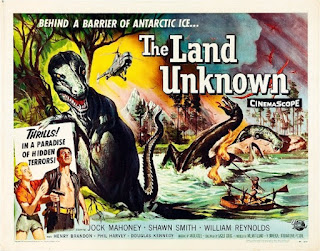 I'm pretty sure that's an Allosaurus, not a T-Rex. It's got three claws on its forelegs.

I believe the proper name would be Bowlingpinasaurous Wrecks.