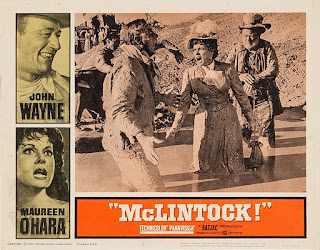 Obviously, Maureen O'Hara didn't need to hitch onto John Wayne's wagon to be a movie star. And yet I always associate them with each other, which is weird because the grand total of films they actually did together can almost be counted on one hand -- and one of those was just a glorified cameo in Big Jake (1971). No. Her film cred was firmly establashed long before Rio Grande (1950). They just seemed so good together. A perfect fit. And frankly, I think O'Hara could take the Duke in a fight despite all the evidence presented in McClintock (1963), a raucous, wild-west take on The Taming of the Shrew. Still, it does contain my all time favorite scene between these two, with an assist from Yvonne De Carlo and Chill Wills. 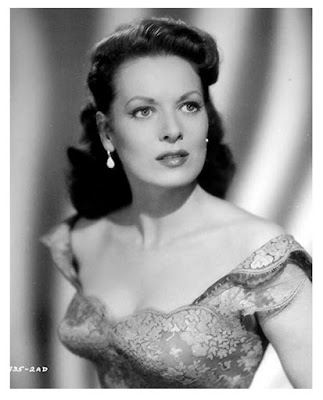 Awesome and then some, she was lovely, one helluva an actress, and one of the last of the rapidly dwindling links to Hollywood's Golden Age. She will be sorely missed.
Posted by W.B. Kelso at 8:39 PM

O'Hara was one of the most beautiful women to ever grace the screen, and one tremendous actress. The movie that O'Hara and Wayne made together that seems to get the least amount of love is Wings of Eagles, which features great performances by the Duke, O'Hara, Dan Dailey, and one of our moderator's faves; Ken Tobey. Also a pre-Festus, Ken Curtis. Highly recommended.