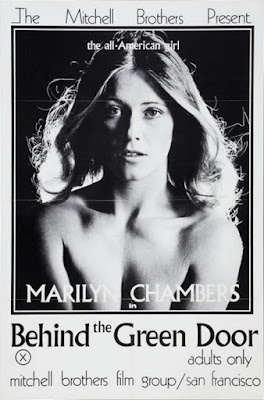 Okay, then, quick and dirty: The origin of the ribald tale that inspired our *ahem* seminal adult film is shrouded in mystery. Most sources date it back to World War II; theater of operation unknown, service unknown, author unknown, which was then circulated around via word of mouth or carbon copies; 16 pages in total, one-sided type, that managed a life all its own, passed down for nearly thirty years, until the Mitchell brothers, Artie and Jim, latched onto it and helped launch the Golden Age of Porn when their adaptation of Behind the Green Door was filmed and released in late 1972. 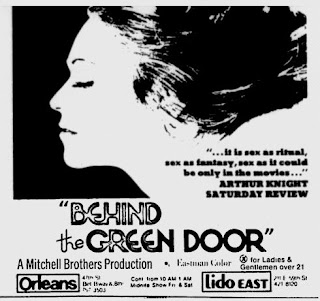 Based out of San Francisco, the Mitchells ran their business out of the O'Farrell Theater, which they opened in 1969, shooting the product in a makeshift studio upstairs and then showcasing it downstairs. By most accounts, their films -- glorified stag loops, really -- ranged from "mediocre to atrocious" (-- a running family joke said the only 'art' in porn was Brother Art). Despite a ton of legal hassles and constant strong-arming by the mafia, who were trying to cut into their profits, the brothers expanded, opening several more X-Rated theaters around California. And after the Supreme Court handed down their decision on Miller vs. California, which redefined the country's obscenity laws, with their product now legalized, the Mitchells decided to take a chance and go all out and spent $60,000 on a feature-length hardcore film. 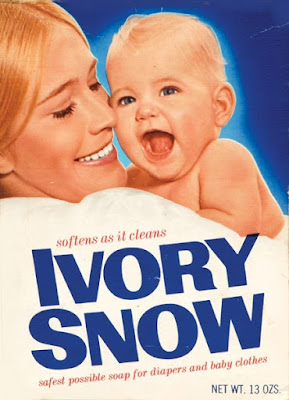 Marilyn Chambers, meanwhile, was a New York model who aspired to be an actress. Before appearing in Behind the Green Door, her biggest claim to fame had been being the Ivory Snow Girl -- billed as "99 and 44/100% pure". Then, after landing a small role in The Owl and the Pussycat (1970) and the lead (as Marilyn Briggs) in (future Friday the 13th guru) Sean S. Cunningham's skin-flick, Together (1971), Chambers moved to San Francisco, where she saw an advertisement looking for talent for "a major motion picture". But upon arriving at the Mitchell's audition, she discovered the true nature of the film and started looking for the nearest exit. Stories conflict on what happened next: either the producers liked her wholesome look and her resemblance to Cybil Shepherd and gave her the hard sell, or they recognized her from Together and offered her the lead. 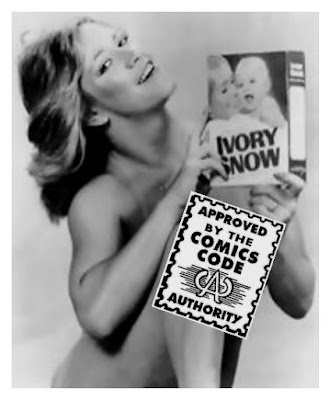 Though "turned on" by the plot, fearing the role might ruin her chance at a legitimate film career, Chambers initially balked, agreeing to a bit part, until she was eventually coaxed into playing Gloria Saunders after they met her demands of a $25,000 salary, a percentage of the film's profits, and that everyone she was to have intercourse with be tested and cleared of any STDs. (It should be noted that Chambers has not one single line of dialogue in the entire film, unless panting and moaning counts.) It wasn't until the film was in the can that Chambers revealed to her producers that she was the Ivory Snow Girl, which the Mitchell's exploited in their promotional campaigns, triggering one massive shit-storm at Procter and Gamble, resulting in a scandal and a nationwide product recall. And along with Deep Throat (1972) and The Devil in Miss Jones (1973), Behind the Green Door managed a national release in '73, out of the grindhouses and into the mainstream, and for a brief period pornography became a legitimate theatrical experience: porno chic. 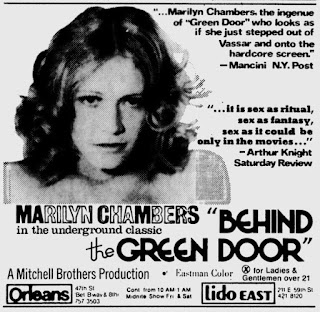 The film itself is not very substantial; about ten minutes of avocado-toned, extremely clumsy, and slightly pretentious set-up followed by an hour of escalating and acrobatic intercourse. The story is told in flashback and is based on the misconception that there is such a thing as a consensual rape. However, after contemplating on what little plot there is, I think there's a distinct possibility that the kidnap victim (Chambers) put on display for an enraptured "secret sex society" audience and the man who "rescues" her at the end (McDonald) of her ravishment are in on it, already a couple, maybe even married, and this is some kind of kidnap / rape fantasy wish-fulfillment. (The M.C. at the Green Door Club, when describing what's about to happen, appeals to the audience to not freak out if they recognized any of the players on stage.) Maybe. I don't know. (That's me shrugging right now.) 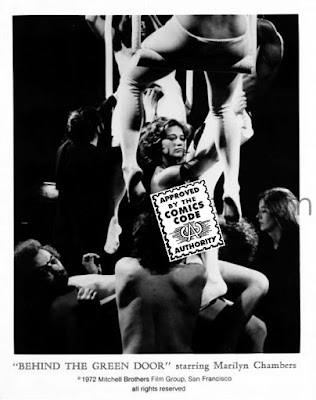 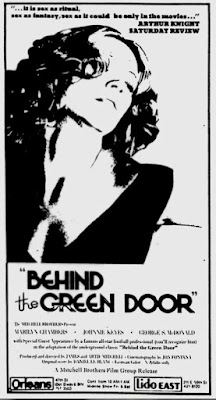 Look, let me be honest: I'm not a huge fan of hardcore. In fact, unless we're talking about something completely whackadoodle like Bill Osco's Flesh Gordon (1974) or Alice in Wonderland (1976) or completely off the rails like the Findlay's Flesh trilogy (1967-68), where there's a plot, demented though it may be, that moves the porn along, and not just the act itself, then I'm not a fan at all. It's not entertainment. It's anatomy and gynecology. And I find that both excruciatingly tedious and extremely boring, making it a slog to sit through. (My notes from the film are as follows: avocado; Ben Davison, What are you doing in this?; oh, great, a mime. And that's it.) 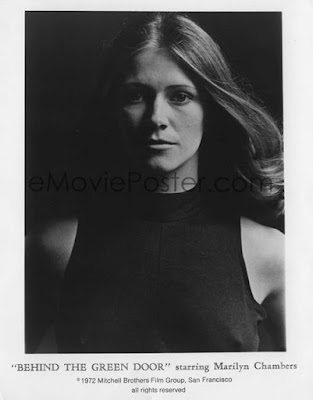 If it is your thing, more power to you. Honest. It just isn't my thing and Behind the Green Door definitely falls into that category, meaning I'm glad its crossed off the list and I will never have to darken this shaded door again. 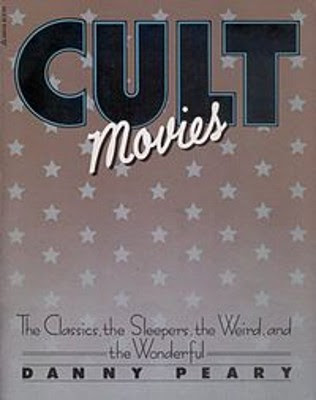 The Fine Print: Behind the Green Door was watched in a darkened living room with the curtains closed via a DVD-R bootleg from a source that would like to remain anonymous. Watched as a Mansfield-Chambers Taboo-Breaking Sex-Symbol double-feature with Frank Tashlin's The Girl Can't Help It (1956). What's the Cult Movie Project? That's 21 down, with 179 to go. 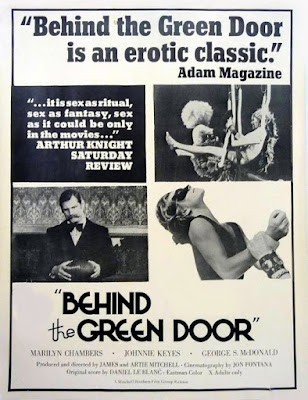