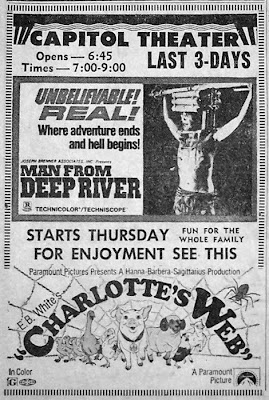 "A number of other difficulties plagued neighborhood theaters subsisting on the eclectic mix of sub-runs, matinees, and exploitation films. A theater manager might have to hurriedly remove posters and lobby cards from the evening adults-only feature for the kiddie matinee and then replace them later while the ushers swept up the kids' popcorn to ready the house for the evening "raincoat crowd." Far from atypical was the weekend of June 11, 1966, when the Leader featured a kiddie horror matinee of BLOOD OF DRACULA and THE MAGIC VOYAGE OF SINBAD. In the evening the theater showcased Audubon Film's racial sexploitation drama I SPIT ON YOUR GRAVE and the mondo sexploiter ECCO. Six months later another inner-city house, the Pearl, showed as a matinee I MARRIED A MONSTER FROM OUTER SPACE and HEY THERE IT'S YOGI BEAR. The kids were then ushered out of the theater before they crossed paths with the evening patrons, there to see a double feature of THE PINK PUSSYCAT and UNSATISFIED." 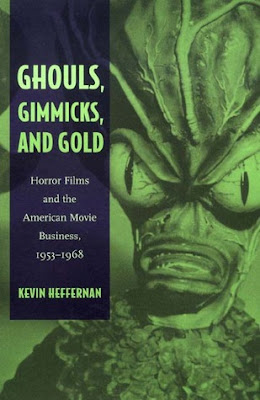