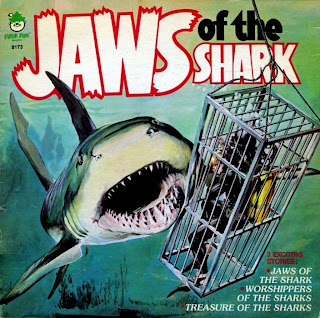 Jaws of the Shark:

Worshippers of the Sharks:

Treasure of the Sharks:

All videos courtesy of recordoobscura.
And that, kids, is why the 1970's kicked ass. 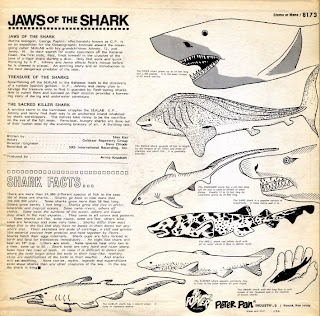 Omigod, but does this thing take me back ... Wow. That's just insane. And hysterical. Okay, my folks bought me this record when I was a kid back in 1975, and I'm as boggled as you are on this revisit to find out this vicious bloodbath and grand guinol of ghoulish underwater delights was from Power Records, a subsidiary of Peter Pan Industries, who, you all remember, released those slightly tamer story-time LP's and '45s of your favorite TV shows and comic books of the same vintage. In fact, famed comic artist Neal Adams provided that nifty cover art that caught my eye on the record-rack and had me bringing it to my father's attention at the Gibson's nearly four decades ago. *sigh* I still have the one for The Six-Million Dollar Man and The Incredible Hulk at Bay, also have the notorious '45 for Little Black Sambo from the same label, but have no idea where this particular album disappeared to. Obviously a cash-in on the JAWS phenomenon, I can't believe the Universal suits didn't bring the hammer down on this thing. Between you and me, though, I'm sure glad they didn't! 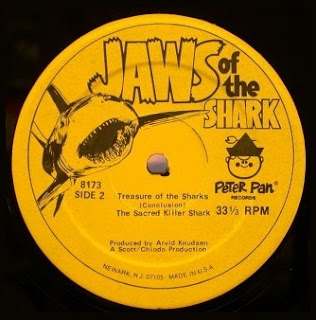 Mr. Jaws, what did she say when you bit her?