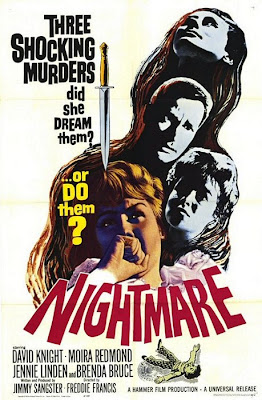 Our film today wakes up with a scream; a scream that appears to happen on a nightly basis for teen-aged Janet (Linden), who has been plagued nearly her whole life by some pretty vicious nightmares. Now, the fact that she witnessed both her mother's psychotic break and the end result of which, being the brutal murder of her father as a fourth birthday present, would probably give all of us a bad case of the night-drizzles, too. And worst of all, things seem to be intensifying, exponentially, lately; and now, poor Janet's greatest fear, the fear that she is destined to crack-up and kill somebody and wind up in the loony-bin, just like dear old mom, appears to be a self-fulfilling prophecy fully realized as these nightmares are now seemingly continuing when she's wide awake!


Make no mistake, Janet was teetering on the brink of mental instability already; but is she really cracking up for good due to this childhood trauma? Or is someone (rather than some thing) using it to push her over the edge for some other nefarious purpose? -- he typed ominously...

While Hammer Studios made their rep in the late 1950s and early '60s with a string of technicolor Gothic romps, lost in all that blood and tensile-cleavage were a string of psychological thrillers, shot in glorious black 'n' white, with the likes of The Snorkel, Scream of Fear, Paranoaic, Maniac and Nightmare. They were shot with an eye for Hitchcockian shocks and suspense and an ear for the left-turn revelations of Henri-Georges Clouzot. And though this was technically achieved, as the films are fundamentally sound and look gorgeous, but, they all hew much closer to the completely mental mentality of William Castle as one salacious and convoluted plot twist after another keeps piling up with each finished reel. Still, they're all well worth a look and all are readily available in some form or another in those Hammer box sets from Columbia. The crisp and clean prints they have just pop off the screen and I can't recommend these discs highly enough. 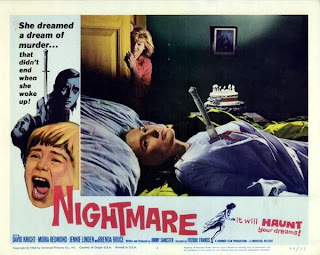 One of the biggest beefs against Nightmare is that its first half just doesn't jive properly with the second. See, when we first meet Janet and watch as she's put through the wringer, Nightmare is just that: a straight up horror movie. And a darn good one, too. It's all very creepy, that builds and builds its maledicted momentum with each ghostly and ghastly encounter; but then the plug is abruptly pulled when we breach the twist as Janet's mental tether finally snaps and she lashes out and murders someone mistaken for the ghost that's been tormenting her. From there, after Janet is carted off to the nuthouse, we then quickly find out what's been really going on, which, sadly, puts a damper on all that hard won and accumulated tension, leaving the movie with nothing to do but kinda start over again with another character, where things become less suspenseful, no matter how hard it tries to recapture that momentum, and more convoluted. 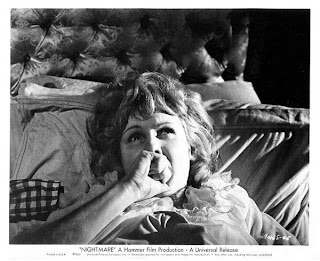 It's almost impossible to throw a rock at Hammer's output from this period and not hit one that had Jimmy Sangster's fingerprints on it, including the script for Nightmare. Here, his plot of a demented perfect-murder (an unwanted fiance) and money-grab (Janet's estate) by a couple of unscrupulous lovers asks you to swallow a lot but never really falls apart until the final denouement, another twist on the twist, which kinda clunks, badly, when the bad guys get their comeuppance, making one wonder when exactly did the good guys sniff out the original conspiracy and maybe, just maybe, prevented the murder in the first place and saved both the victim's life and Janet a whole lot of grief. 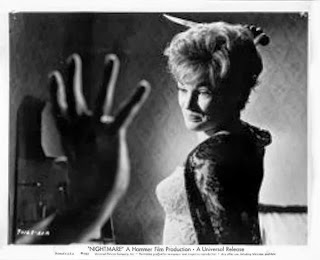 Despite these plot hiccups, Nightmare is an absolute feast for the eyes. Not since The Spiral Staircase have I seen black this BLACK onscreen and used so well in frame to enhance the mood. Noted cinematographer Freddie Francis, who had just controlled the lens for Jack Clayton's The Innocents, definitely brought his cameraman's eye to the director's chair and his efforts, along with actual cinematographer John Wilcox, using the sets, lighting and framing to impend the dread and show the isolation and the crescendo-ing mental disintegration of first Janet and then co-conspirator Grace (Redmond) definitely and defiantly helps push Nightmare out of the hackneyed mess morass and into the serviceable thriller column for me, at least.

Poster campaign for Nightmare at the Archive.

Newspaper ads for Nightmare at the Morgue. 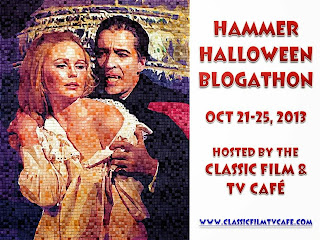 Alright, Boils and Ghouls, this post is part of the Classic Film and TV Cafe's Hammer Halloween Blogathon, running October 21st thru the 25th. Thank you most gracious hosts for throwing out such a wide net for participants. And now, if you dare, follow the linkage and tear into all those other great reviews, won't you? Thank you. 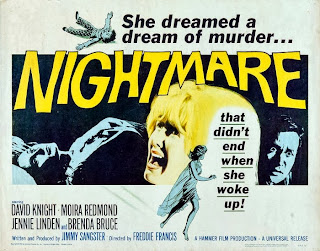 I saw this for the first time when it was released in a Hammer boxed set and I knew nothing about the plot. I was mesmerized from the opening frames, first with Janet's nightmares and then with the film's second half which kept me guessing most of the way as to what was really going on. Although Terence Fisher is rightfully known as Hammer's best director, Freddie Francis is surely the next best. His background as an outstanding cinematographer gives his films a unique look (especially, I think, the B&W suspense films he did for Hammer). I rather liked the film's structure, which (as you pointed out) is broken into two halves. NIGHTMARE isn't as good as Hammer's best suspense films (SCREAM OF FEAR, THE SNORKEL), but it is definitely worth watching and the visuals are indeed outstanding.

Both halves are really quite good, with a nod to the first as being the superior of the two. However, when you put these two great halves together there's obviously gonna be some damage on impact. Not a train wreck, mind you, but just like with a car accident, even with a minor fender bender like this, once the damage done, no matter how good the repairs, it's just not quite the same as something is always rattling around under the dashboard, like, say, when you try to reconcile exactly where and when did the other staff realize our co-conspirators were co-conspiring.

It's interesting that both Francis and Sangster have contended over the years that 'Nightmare' was a disappointment because it didn't turn out the way 'he' had intended, making one wonder if perhaps Francis was coming from one direction (the spookshow) and Sangster from the opposite (the crime caper), which might explain why things look great but feels just a bit off.

Strangely enough, when regarding Hammer, I actually prefer their sci-fi output and these B&W thrillers over their Creature Features. I like the movie a lot, but these quibbles have plagued me since my first viewing. And with a little fine-tuning, 'Nightmare' would probably be considered one of Hammer's finest hours.