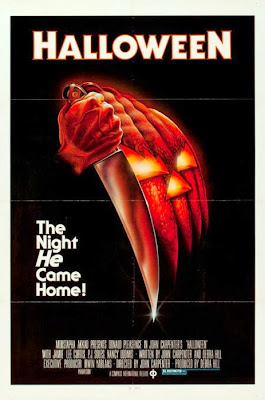 Fifteen years after he brutally murdered his older sister on Halloween night, Michael Myers engineers an escape from the mental institution he'd been confined in since he was six years old. Convinced his patient is evil personified, and doubly-convinced he will return home to kill again, his psychiatrist doggedly pursues him back to Haddonfield, where his worst fears are soon realized as the ghostly fugitive starts stalking a trio of teenaged girls who have no idea what's about to hit them...

When Irwin Yablans caught a screening of John Carpenter's Assault on Precinct 13, the producer really liked what he saw for the money that was spent and immediately sent out feelers to the novice auteur to see if he'd be interested in doing a movie for him based on the old urban legend of an escaped mental patient stalking and terrorizing an isolated babysitter. 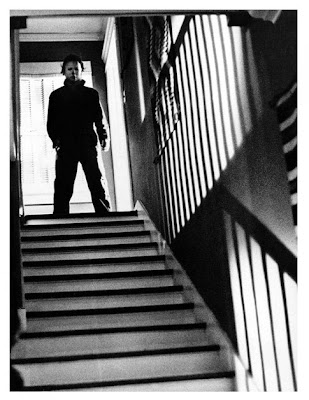 Wanting something as scary and groundbreaking as The Exorcist and The Omen -- only without the pea soup vomit or visceral impaling and decapitations, with a dictum of a scare every ten minutes without ever showing anything and letting the audience be frightened by what they think they saw, Yablans found a kindred spirit with Carpenter, who always championed old school film shocks, and he agreed to the challenge of writing, directing and scoring the feature under three conditions: total creative control, final cut, and his name over the title. Yablans happily agreed to these demands, and feeling the film could made for about $300,000, after shopping their project around, and after a lot of closing studio doors hit them on the ass on the way out, the duo finally found a simpatico backer with Moustapha Akkad. 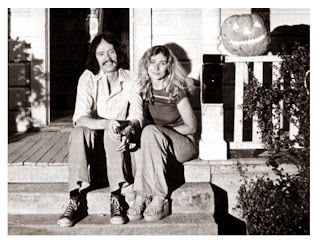 With the money firmly in place, Carpenter turned to his muse (and girlfriend at the time), Debra Hill, and together, they hammered out a script for The Babysitter Murders with Hill concentrating on the teenage protagonists while Carpenter focused on the psycho and the kooky doctor trying to rein him back in. Here, Yablans stepped in again and suggested they set the tale around Halloween; and even co-opted the holiday for the title. And with that in mind, the script galvanized itself with several more elements about evil's durability (Carpenter based 'the shape' on Yul Brynner's unstoppable robot in Michael Crichton's Westworld, who kept on coming and coming...), terrible family (and community) secrets best forgotten reasserting themselves and coming home to roost with a vengeance, and some old fashioned carnival spook-show thrills, where there's always something lurking in the shadows around the next turn, waiting to jump out and say "boo." 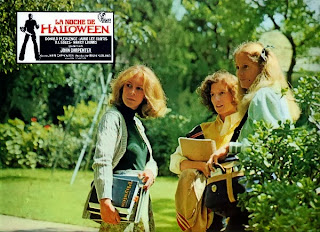 Casting would prove slightly more difficult. Originally, the part of Laurie Strode was offered to Anne Lockhart, who was starring in Battlestar Galactica at the time; but this first choice turned them down flat. Hill then suggested Jamie Lee Curtis, a fresh face, whose name could be exploited being the daughter of Tony Curtis and Janet Leigh, who, of course, starred in Psycho, whose shocks and black humor Carpenter was trying to mimic. The role of Lynda was specifically written for P.J. Soles (and cribbed just a snudge from her similar character in Carrie); and Nancy Loomis, the girlfriend of production designer Tommy Lee Wallace, was given the role of the good girl foil, Annie. A hold over from Precinct 13, Loomis, as were several other actors, including Charlie Cyphers, were fast becoming familiar faces in Carpenter's burgeoning stable of stock players, mimicking some of his cinematic role models like John Ford and Howard Hawks. 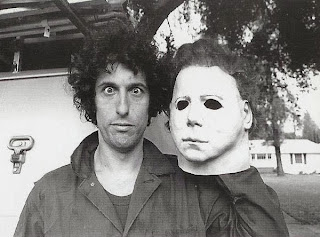 For the silent killer, Carpenter cast his friend, Nick Castle, for the majority of the picture, with Tony Maron subbing in for the brief unmasking. But Castle is the one who deserves most of the credit for Michael Myers' menacing and unrelenting presence. As for Dr. Loomis, again, Donald Pleasance was not the first choice; and the only reason he agreed to be in Halloween is because his daughter was a fan of Assault on Precinct 13's soundtrack. And as much as I love Peter Cushing and Christopher Lee, I'm kinda glad they both turned down the role first because Pleasance brings such a maniacal bugnutsitude to the character, making one wonder if, indeed, the lunatics were running the asylum. And just like with most of these spooky tales, despite all that ranting and raving, the nutjob is absolutely right on the money. 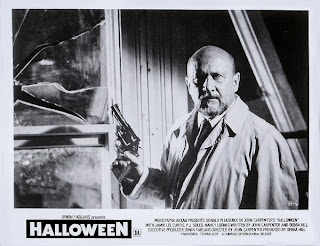 The script and cast set, with a crew made up of friends, and friends of friends, hungry for experience, filming commenced from every possible angle that didn't show any palm trees in South Pasadena. And with some help from cinematographer Dean Cundey, armed with the recently innovated Panaglide steadicam, the film quickly established a distinctive and fluid look and an overall aesthetic that definitely elevates it several notches above its like-minded brethren. (I love the constant misdirection and sleight of hand with 'the shape' appearing and disappearing at will, and how scene after scene is set up to draw your attention one way when we you should be looking somewhere else.) Add in a modified William Shatner mask and a soundtrack inspired by the pulsating beats of Goblin and Mike Oldfield's Tubular Bells (performed by the one-man Bowling Green Philharmonic Orchestra), Carpenter and Hill and company produced themselves one helluva taut, tense and creepifying film. 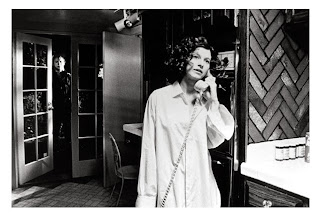 Once filming was completed, however, Yablans still couldn't find anyone willing to distribute it ( -- a decision that was about to haunt many a studio exec.) Undaunted, Yablans decided to distribute the film on his own through his Compass International Pictures. Turning to his business partner, Joseph Wolf, who cashed in a favor at MGM that netted them 400 prints of Halloween, Yablans started rolling them out regionally with little or no publicity; and after an initially tepid response, that had the disappointed filmmakers heading back the drawing board, Halloween quickly caught fire and started raking it at the box-office as it moved from mouth to mouth and city to city  ( -- it was held over for five weeks in my hometown). The spread was so slow and steady rumor has it both Carpenter and Hill never even realized they had a hit on their hands until several months had passed. 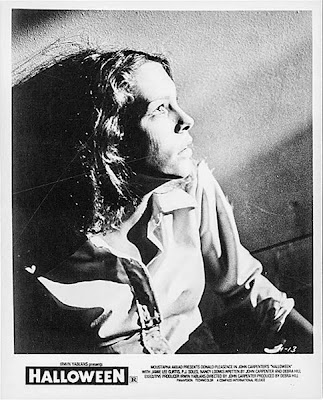 Often imitated but never bettered, Halloween is one of those rare films that not only lives up to its reputation but exceeds it. I wasn't old enough to see it in a theater back in 1978, but heard all about it from my eldest siblings, who played right into my hands when they thought they were rubbing that fact in when they gave me the rundown. The first time I actually saw it was the extended cut shown on NBC. Then came the VHS version, and then the DVD, where I finally got to see the whole thing in its proper aspect ratio, and finally, the BluRay. Each stage was a new revelation, with the latest platform really showing what an influence Mario Bava had on the color schemes and the obvious mini-Argento / Suspiria homage during the rainy nuthouse escape, and each step only cemented my love for the film even further. And if you haven't seen it yet, I truly envy you. You're in for a real treat. No trick. Honest.

Poster campaign for Halloween at the Archive.

Newspaper ads for Halloween at the Morgue. 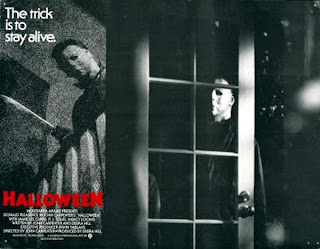