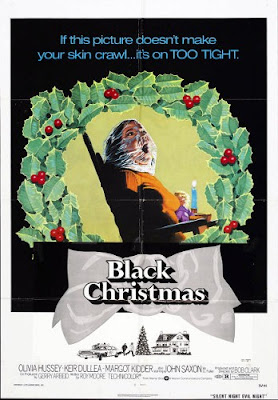 I think we can make it official: A Christmas Story has legitimately dethroned It’s a Wonderful Life as the quintessential Yuletide holiday movie. That’s pretty good for a film whose anecdotal stories it was based on, penned by author Jean Shepherd, first saw print in Playboy magazine, and whose director, Bob Clark, had up to that point only helmed a few low budget horror movies and one particular successful teen/sex romp named after a stuttering cartoon pig. Of course, one of those horror movies that Clark hatched also had a Christmas theme; only this one wasn’t about life lessons learned during the quest for a certain gift, or spreading good will toward men. Far from it. We’re talking about a film that is either credited for -- or railed against -- for starting the whole slasher/body-count movie phenomenon: a lethargic but effectively moody little potboiler known as Black Christmas. 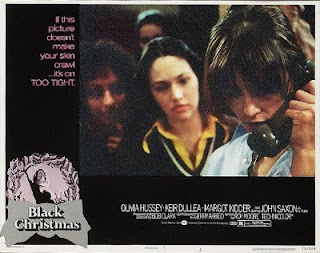 Quick and dirty: inbetween calls from some obscene prankster, the girls of Pi Kappa Sigma house pack up and prepare to clear out for the holiday break. And as their going away Christmas party winds down the sorority sisters fail to realize that this creepy caller, via our old friend the Rogue-POV camera -- that is apparently having an asthma attack, is actually phoning them from inside the house until he coaxes and corners a curious stray and strikes! Wrapping her up in a plastic bag, the killer then hauls the asphyxiated victim up to his attic hiding place, where it will keep a silent vigil for the rest of the movie 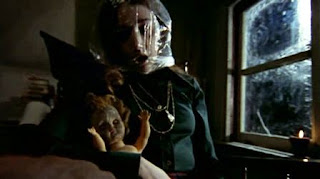 After the dirty deed is done, the killer lets his fingers do the walking on the downstairs extension again -- each call less coherent than the one before, introduces himself as Billy, who has done something very bad, and then torments the unsuspecting collegians with more blathering and pig-like squeals. (These grunts provided by Clark himself and several others, including an uncredited Nick Mancuso.) One of the girls listening in deciphers some of the gibberish, and Jess (Hussey) thinks it might be her estranged boyfriend, Peter (Dullea). (And when we find out why they’re estranged, you’ll realize Jess isn’t your typical final girl.) Unfortunately, the cops are too busy to look into this, on the surface, nuisance case as they’re busy scouring the countryside for a missing 13-year old girl (-- who may or may not have been another victim of Psycho-Billy.) Meantime, when the father of the plastic-wrap victim comes to find out why his daughter didn't make it home, the 100-proof house mom suggests she's probably shacked up with her boyfriend, while mouthy Barb (Kidder) consoles the worried patron with tales of the sexual prowess of turtles 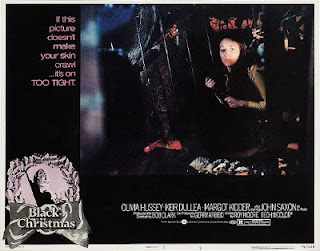 Red herrings, false leads, and a slow but steady body count follow -- including that lushy house mom, future SCTV alum Andrea Martin, and one baby grand piano. And then, after the infamous Christmas caroling murder (-- and those of you who have seen the movie know what I’m talking about. Death by unicorn! Poor Margot ...), the climax comes a calling, where the bumbling police finally trace the call and warn Jess to get out of the house. Too late, though, the shadowy, unseen killer is already upon her! Moving fast, Jess gets away and locks herself in the basement. There’s a knock on the door. She never saw the killer’s face. It’s her boyfriend, who just wants to talk things over.. 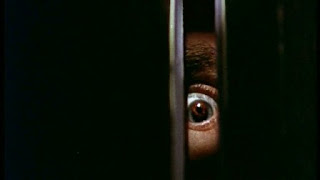 I won’t spoil the ending for Black Christmas because there is no ending. Okay, fine, there's an ending; but it's one of those that I like to refer to as a cheese-dick ending. Usually all the knotted and convoluted plot threads in these thrillers don’t make a lick of sense until they untangle all over themselves during the climax; but not this time. It is maddeningly ambiguous. Some think the "There is no answer, keep searching" ending is brilliant, while others, like myself, find it colossally irritating, sinking what up to that point had been a pretty effective mystery. Now, it’s my understanding there was a more conventional ending, where the true killer is revealed, but Clark didn’t like it. And so, he re-shot it and the results, as they say, vary per customer. In the final version the killer remains in the shadows, but with the wonders of DVD, if you freeze frame it right, you can still see who it is. Breaking into the industry as a second unit director on the skuzzy K. Gordan Murray classic Shanty Tramp, Clark ’s first directing gig was She-Man; the tale of a draftee disguising himself as a woman to avoid serving in Vietnam. After that, he teamed up with Alan Ormsby for the zombie-fueled Children Shouldn't Play with Dead Things and Deathdream -- an offbeat tale of another Vietnam veteran's return home that draws inspiration from W.W. Jacob's The Monkey's Paw. The duo also tackled Ed Gein's squicky home-cooking shenanigans in Deranged, where they broke in some new special-effects guy named Savani. Next, Clark pitted Sherlock Holmes against Jack the Ripper in Murder by Decree before unleashing Porky's, Porky's II and Porky's III on the world. (Though I do have a soft spot for Porky's II, as it was one of the first R-rated films I managed to bluff my way into at the ripe old age of 12.)

Getting back to Black Christmas, this film, not unlike Clark’s other Christmas movie, initially wallowed in obscurity under several different titles. Originally released as Silent Night, Evil Night by the studio, who feared audiences would confuse the film for another blaxploitation movie, after it barely made a blip at the box-office, the film was repackaged under its original title and sent back into circulation again. It didn’t really help, and Black Christmas might have been forgotten forever if NBC hadn’t gotten cold feet after Ted Bundy revealed it was his favorite movie and pulled it from its slot as a Movie of the Week -- under yet another title, A Stranger in the House. After that, being the morbid little buggers we are, people began tracking it down to see what it was all about, liked what they saw, and began championing it over John Carpenter’s Halloween as Slasher Ground Zero. 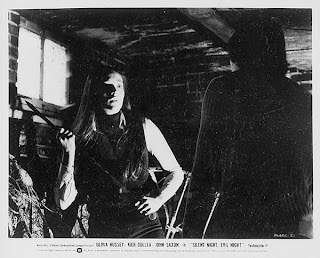 But I think both films get and take way too much credit for starting this particular genre. They both helped cement the rules of the game for them, sure -- and if you don’t know what I’m talking about, what rock have you been under? And if so, welcome back, now go rent Scream and all will be made clear. Rumors were flying a few years ago about a proposed sequel for Black Christmas, when it was officially released on DVD as Hollywood geared up for another Maxim-ized remake. Word was that Clark was set to direct, and stars Hussey and Saxon were rumored to rehash their roles; but those rumors quickly dried up. I guess Clark was too busy making Super-Babies: Baby Geniuses II. Gah! 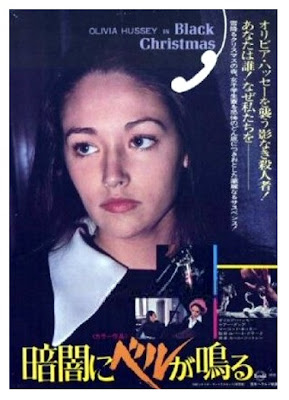 Despite its lofty place in horror history, Black Christmas is not without its flaws. The first time I saw it, I hated it. The second time through, still hated it. But the third time through, something finally clicked and, despite its glacial pace and 1970’s fashion faux pas, I warmed up to the jagged web o’ mystery found therein despite its nebulous conclusion that doesn’t allow the puzzle pieces to fall into place and leaves them scattered all over the frozen landscape. So, if you’ve had enough of the Parker clan by hour 12 of the 24 hour broadcast marathon next Christmas, you could do a lot worse than Black Christmas if you’re looking for morbid substitute to feed your inner Scrooge after all that holiday cheer.

Poster campaign for Black Christmas at the Archive.

Newspaper ads for Black Christmas at the Morgue. 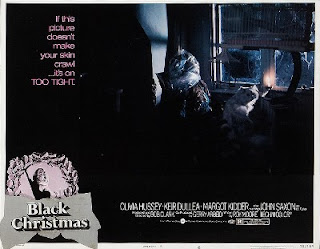