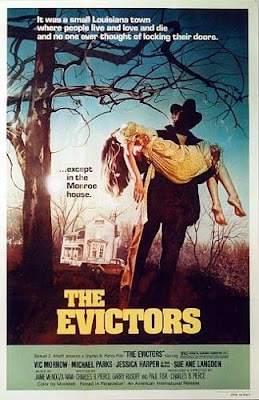 "It was a small Louisiana town, where people live
and love and die, and no one ever thought of lock-
ing their door -- except at the Monroe house."
___ ___ ___ ___ ___ ___ ___ ___ ___ ___ ___ ___ ___
When a New Orleans man lands a much coveted job at a cotton mill in a small Louisiana town he quickly packs up his wife and goes house hunting. And after finding a home that is almost too good to be true, the couple quickly snatches it up. But, as they settle in, and things start to creakin' and a bumpin' in the night, the wife soon realizes that maybe they should have asked why the house was vacant to begin with -- and she doesn't like what she hears about what happened to the previous tenants -- and the tenants before them, too...

Sticking with his usual, ain't-broke-don't-fix-it, modus operandi, Texarkana mini-movie mogul Charles B. Pierce proclaims this haunting, post-Great Depression-set tale was also based on a true story, and then spins his yarn using flashbacks and raconteurs as knitting needles to stitch it all together. So basically, he took what worked in The Legend of Boggy Creek and mixed it with the similarly successful elements of The Town that Dreaded Sundown, resulting in what appears to be, on the surface, some kind of bizarre Hayseed Slasher; but I like to think of it as more of a broodingly gothic southern potboiler -- think Tennessee Williams by way of Charlotte Brontë, or something. What it really is, though, is Pierce's perfect film. 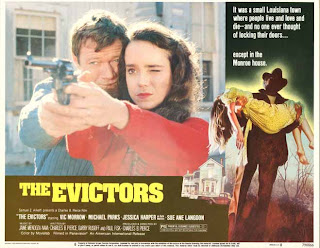 To say anymore about the plot would probably be giving too much away; however, I will confirm that, yes, the twist ending can be spotted coming about six reels away, but it won't matter because, thanks to the likable characters, we're squarely on the film's side from the get go. And what really pegs this one several notches above Pierce's other work is the cast. Spooky house and deranged killer aside, when all is said and done, this film is really about Ruth Watkins, and Jessica Harper easily carries the film as the menaced housewife, who is wily, feisty, and quick on her feet, and isn't afraid to defend herself, but is also smart enough to know that sometimes flight is a much more reasonable option than fight. Supported by the affable and doting Michael Parks, whose job constantly keeps him away and her in danger, and Vic Morrow as the lecherous real estate agent, with all apologies to Ben Johnson (Greyeagle) and Lee Majors (The Norseman), this is the best ensemble cast Pierce ever worked with and, again, it is their efforts that elevate the film to a whole new level.

And speaking frankly, watching the beautiful and bewitching Harper do her thing dressed in those 1940's period fashions is worth the watch alone. I'll also give a shout out to artist Drew Sturzan, who's spectacular promotional artwork brought this film to my attention in the first place.

The film itself looks fantastic, as Pierce and cinematographer Chuck Bryant's camera easily brings to mind the work of Dean Cundey, the true master of widescreen Panavision, where they utilize the entire frame, from side to side, and front to back, to impend the dread. And just like Cundey, with a slight adjustment of reference, or using the actors to draw our attention one way when we should be looking the other, the filmmakers tee us up and then smack us over the head when we start seeing shadows and shapes where there shouldn't be ... Or did we? And I don't think anybody can do backwoods bucolic or rural rustic better than Pierce when he's on top of his game. Here, you can really feel the delta heat, hear the pulsing, buzz-saw chorus of the cicadas, and feel all those psychosomatic skeeter bites. 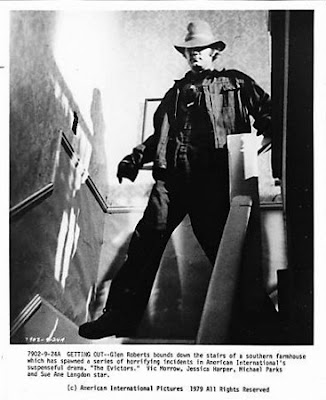 Perhaps unjustly lost in the wash of Pierce's more infamous flicks, The Evictors most definitely deserves better. Long out of print on VHS and never released on DVD, which is a crime, the film, along with a metric ton of other flicks from American International's back-catalog, is currently making the rounds on Netflix's Instant Watch feature in all its widescreen glory. Highly recommended folks. Now get to watching or Farmer Monroe will come for you, too! 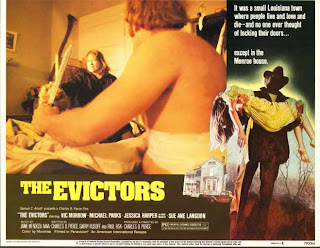