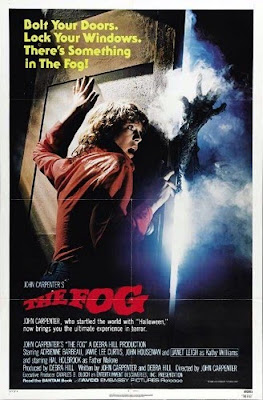 I was about four or five when I saw The Ten Commandments for the very first time on TV; and one of the things that always stuck with me from this first viewing was the last plague Moses sics on the Pharaoh, when the Almighty sent his Angel of Death to kill all the first born sons of Egypt. (Well, that and that whole parting of the Red Sea thing...) This was realized in the film with an unearthly fog, creeping and seeping through the streets, and to even touch this vapor meant instantaneous death -- and, to me, it seemed regardless of your birth order. 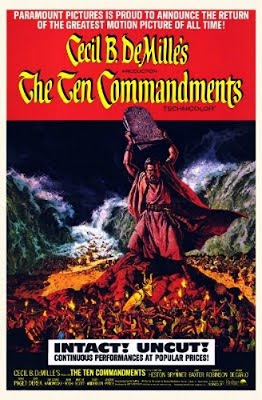 Several years later, while driving home on a lonely country road I crested a hill and, in one of those bizarre barometric twists of nature, spied a small fog bank on the other side, barely three-feet high, that devoured the road ahead of me. As I dipped down into the small valley below the fog engulfed the headlights and broke around the car's hood, but then immediately stitched back together just past the trunk. Intrigued by this encompassing soup, I pulled over, kicked the hazards on, and got out. The moon was full and bright and lit the mist up like white liquid under a black UV-light. Wading into this cloud, the vapor whipped up in my wake as I ran my hands over the top of it, like I was wading in a pool of water; and then, on a whim, got down on my hands and knees where, to my surprise in the headlamp glow, I saw about a six-inch gap between the gloom and the ground. Above, as I continued to move around, all that was visible were some fence-posts, a nearby windmill, and the top of the car. This was all as cool as it sounds (I hope), and my words don't do it justice, but then, just like when you’ve been in the water for a while and that stupid shark music starts playing in your head and gives you the willies as you contemplate your place on the food chain, a small, dour pit or irrationality developed in my stomach and settled there as I smiled sardonically at myself, wondering if there was anything lurking nearby, no matter how nonsensical its existence, just beyond my sense to detect it properly. 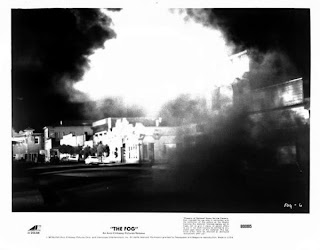 No. This wasn't any kind of old school biblical dread that I felt that night, but ghosts. Ghosts of the unsettled dead, who linger, fed by a need for vengeance, and walk the earth until their untimely and unjust deaths are avenged ... That's right, in the middle of nowhere, and several time zones removed from any major body of water, I was worried that Captain Blake and his men were out there, somewhere, waiting for me to turn my back to his best advantage. So, yeah, you could say John Carpenter's The Fog made a helluva impression on me, too...

The Fog opens on a quiet beach near Antonio Bay, where an old salt enthralls a group of kids gathered around a campfire with ghostly tales of the sea. As the fat full moon rises and the brackish tide slowly ebbs, our storyteller listens to a forlorn wind as he checks his watch, that shows five minutes to midnight.

Time for one more story:

When the clock strikes twelve, he direly intones, it will be the 21st of April -- a date that will live in infamy, we’ll soon find out. For on that date, exactly 100 years ago, the Elizabeth Dane got lost in a dense, meteorological defying fog in these very waters. And when the crew spotted what they thought was a signal fire to lead them safely in, it was only someone’s campfire. Terminally off course, then, the ship cracked up on the rocks off Spivey Point, just over yonder, and sank, with all hands lost to the cold and dark and unforgiving sea. And as the Elizabeth Dane settled to the bottom, seemingly having served its aberrant purpose, the preternatural fog disappeared ... Now, I know this story sounds more tragic than scary, but this tale ends with ominous portent, when the old man prophesizes that when that unnatural fog returns, those doomed and drowned men will rise up out of the water and seek revenge on whoever lit that misleading fire just as a distant church bell strikes midnight -- in more ways than one -- on the sleepy little hamlet of Antonio Bay, whose sinister secrets are about to surface and be cleaved wide open! 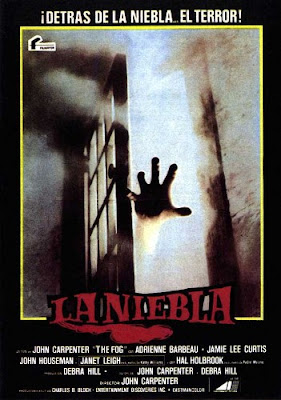 Okay, then, now, that beginning sequence with John Houseman's preamble on the beach sneakily lulls the viewer into lowering your defenses and really sucks you in (...and let's face it: Houseman just reading the phone-book in these surroundings would be spooky enough). And this eeriness continues right through the opening credits as the town is overrun with bizarre and vandalous poltergeist-like phenomenon. Most shots have a clock in them somewhere, showing the Witching Hour as it slowly tics by. If there is no clock, resident disc jockey Stevie Wayne (Barbeau) gives the time over the air. It's a very subtle -- yet very satisfying, sequence. But, the film just cannot sustain the mood past this point. There are a few flashes of brilliance later, but the film loses its focus somewhere in the middle, switching back and forth between characters and plot-threads so fast you'll get whiplash. And after the scatter-shot middle, we're left with an all too familiar ending where Carpenter resorts back to his Howard Hawks roots and gets his Rio Bravo on with another hole-up and siege scenario, similar to Assault on Precinct 13, only this time with water-logged zombie sailors. 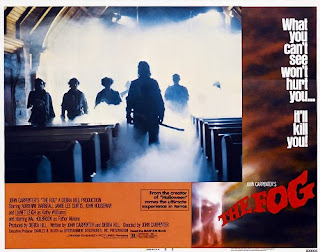 It’s been documented that Carpenter has a framed copy of Variety in his possession that proclaims The Fog was the biggest moneymaker for a certain period in 1980. He says he keeps it as a reminder for how close he came to a complete, cinematic disaster. Co-writing the script with his long time collaborator Debra Hill (Halloween, Escape from New York), the film was meant to be a ghostly/ghastly homage to Lovecraftian themes of terrible family secrets, curses, and evil-squishy things hell bent on vengeance. And unlike his other films, The Fog truly is a straight-up ghost story designed to titillate, creep-up, and give you a bad case of the drizzles. We hear a lot of death in this movie, but we rarely see it. Once principal photography was completed -- aided, abetted and greatly enhanced by the efforts of cinematographer Dean Cundey, another Carpenter regular, the director turned the film over to his trusty editors, Charles Bornstein and Tommy Wallace, and began hammering out the film's soundtrack. But after splicing all of it together, the end results were rather dire. Finding it too plodding and too slow, Carpenter initially thought about biting the bullet and letting the film ride, but then, with the studio's encouragement, who felt the film lacked sufficient shocks, the director decided to try and salvage it. He took a month, rewrote and re-shot several scenes, and even redid the film’s score, then spliced it back together with the old footage into something that he and AVCO/Embassy could live with. When the film was finally released, The Fog didn’t receive as much acclaim as Halloween but it did do very well at the box office. 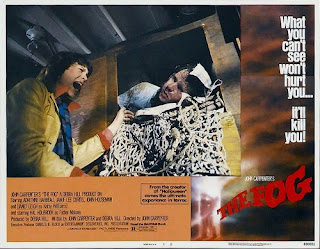 There are a few interesting subplots that are brought up, like when Solley (Curtis) and Castle (Atkins) find and search the inexplicably swamped and salt-encrusted Sea Grass, which inevitably leads to a reanimated corpse in the morgue. Cool, yes, but this also reinforces one of my biggest beefs I have with the movie -- another interesting plot development that's spooky enough as an isolated incident but only adds confusion when looking at the whole. And making matters worse, more often than not these tangents are left to die on the vine. Are the other missing sailors, Dan the Weatherman, and Mrs. Kobritz now among the dead assaulting the town? Close scrutiny of some of the publicity materials show that they very well could be. And, more importantly, were all the victims direct descendants of the six original conspirators like Father Malone (Holbrook), whose church was built with the blood-stained gold? 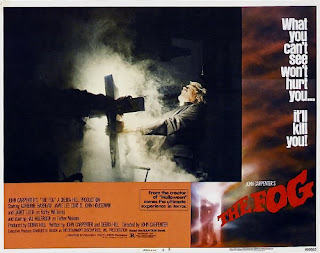 Despite these complaints, I do like this film -- really, and quite a bit, actually. Most of the problems I have can probably be blamed on its patchwork origins and over-tinkering after the fact; and I've been told that a lot of the questions and holes the plot doesn't answer or fill in are expanded upon in Dennis Etchison's novelization, and even confirms some of my theories and suspicions. 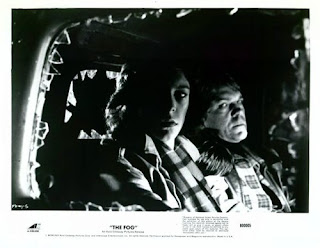 Perhaps lost in the, forgive me, fog of Carpenter's more famous films, The Fog probably deserves to be brought out into the sun more often, which can burn away any and all misgivings. Besides, it is really, really creepy. A slow and slithering creep, sure, but sometimes, those are the best kind.

This post is part of the John Carpenter Blogathon, originating over at J.D.'s Radiator Heaven. Thanks for throwing out such a wide net and allowing me to participate. Now click on over there and check out the other entries. Good reading, to you all! 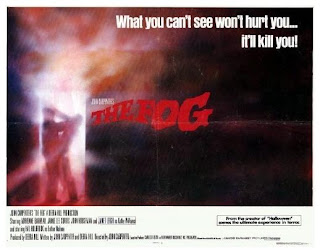 Very cool! I agree that I also enjoy the film despite its flaws and I would be very curious to read the novelization. The one for ESCAPE FROM NY also fleshes out the world and some of the characters more than the film did and I believe that this came from an early draft of the screenplay.

For me, THE FOG works as a fantastic piece of style over substance. The mood and atmosphere is so effectively creepy that it trumps any problems I have with the film.

Great post and contribution to J.D.'s John Carpenter Week. I love THE FOG. Thanks for this.

Thanks to you both!

"The Fog" is a rock-solid third on my list of favorite Carpenter films (behind only "Halloween" and "Big Trouble"). And really, my only complaint about the film is liking so much that I demand to know more.