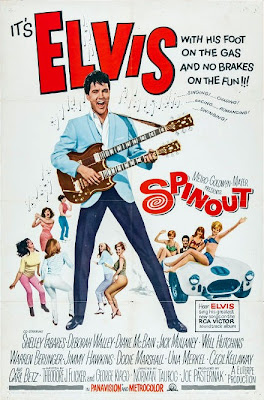 As we hit the ground with the pedal already to the metal, race car driver/ singer Mike McCoy (Presley) takes his eyes off the road to make the goo-goo with a perky little number in a souped-up coupe only to wind up forced off the road and into the drink by the same. (Hands at ten and two, buddy.) And wouldn't you know it? Said Perky McPerky wants McCoy and his band to play at her birthday party with a little snogging and cake to follow. And whatever the perpetually spoiled Perky McPerky wants, Daddy McPerky will dole out whatever it takes to make his baby girl happy no matter what. However, turns out she's not the only one drawing a bead on our boy, Mike...

Only ten minutes into this tale of Jedi mind-tricks, music and mayhem, when Jack Mullaney (comedius reliefi odious) genuinely made me bark out loud with laughter on three separate occasions, I knew I was in for something truly ground-breaking with Spinout; one of the many reasons why Tickle Me has now been officially dethroned as my favorite Elvis movie. Well, that and the fact the Big E and his 1+2+1/2 back-up band immediately brought to mind The Impossibles helped a little, too. 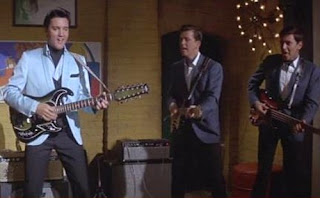 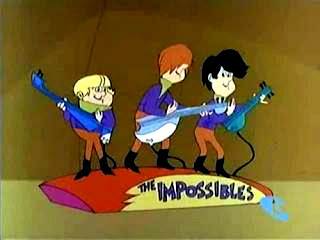 Also, Deborah Walley being so freakin' adorable that I couldn't care less that she played the drums with a slow right AND left hand probably sealed the deal. 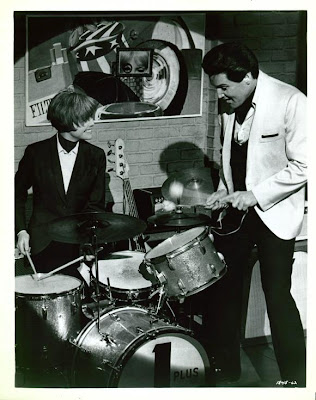 Yeah, Spinout is another one of Presley's "stone-age" flicks, that just so happened to mark the 10th Anniversary of his film career, one should note, which had devolved both minerally and cinematically since the golden heyday of  Loving You and King Creole. Nope. Spinout doesn't have a single coherent thought in its head aside from one simple notion rattling around in a lot of empty space; a notion to keep stringing together one song or gag after another as Elvis butts heads with the local big-wig, who is bound and determined to get our hero for his daughter and on his racing team, and not particularly in that order, while trying to avoid not one, or two, but three women (maybe even four) who've got 'em locked in their matrimonial sights, when all our boy wants to do is be left alone to play his music and race his roadster his way, baby. 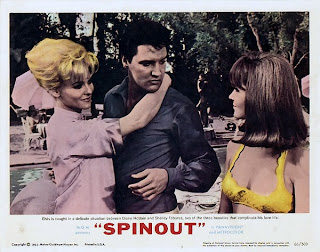 E'yup. Spinout is dumber than a bag of peanut-butter and 'nanner sammiches. But, You know what? I don't care. Not anymore. If you've read any of my old reviews of Presley's less than stellar foray into feature films on the mothership, the bitterness over the wasted potential is readily palpable. Most of those were written over a decade ago, from a very angry and cynical place, apparently, but something's changed. And changed fundamentally, thanks to Spinout. (That's me shrugging right now) And so, from here on out, I will be watching these later Presley pictures with a fresh eye and a keen for taking them at face value for being the cinematic goofs, studies in escapism, and sheer stoopidity they are and celebrate them as such. If I want serious Elvis, I'll watch Jailhouse Rock or Wild in the Country. If I want goofball Elvis, I'll start with Spinout and work my way out in a spiral pattern from there. You hear that? I am done moping and grumping about this kinda shit. 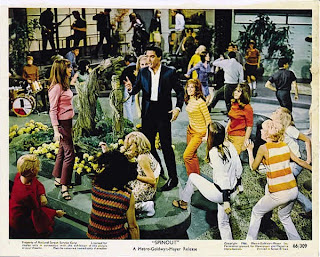 Anyways, the film does have some actual merit. From Adam and Evil to the hideously infectious Never Say Yes, Spinout probably sports one of the better soundtracks of these later pictures, too, including a cover of Bob Dylan's Tomorrow Is a Long Time, though one should note the number did not appear in the actual film. I'll get to the leading ladies in a sec, but, as I already mentioned, Mullaney is a helluva lot funner here than he was in Tickle Me, and teamed up with Jimmy Hawkins these two make a great pair of second-bananas for Elvis to play off of. 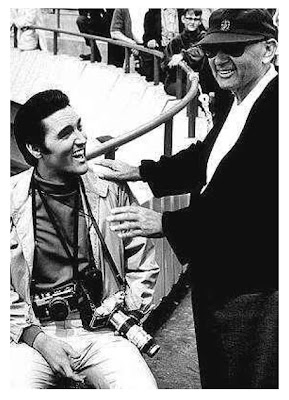 Presley and Taurog did nine pictures together.

And let's give Norman Taurog some credit, as well. The veteran director rode herd on nine of Presley's post-army flicks, starting with G.I. Blues and ending with Live a Little, Love a Little. I don't know, to me, Taurog just seemed to have an uncanny knack for cajoling Presley into really cutting loose with the slapstick elements that dominated these later pictures, and his actor always appears more at ease being the goof than he did in the likes of Harum Scarum and Girl Happy. 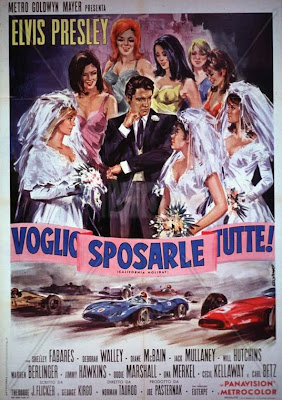 And on top of all that, we've got Walley being spunky and adorable, Dian McBain being seductive and gorgeous, Shelley Fabares being adorable and perky, Dodie Marshall being completely out of her mind, and Elvis being, well, Elvis. And sometimes, that's all we ask and all we need.

Newspaper ads for Spinout at the Morgue. 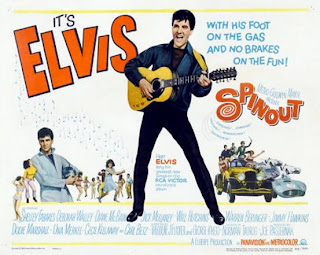