Vintage Review Spotlight :: Gojira vs. Godzilla! Who Will Be Crowned King of the Monsters! Either Way, We Win! 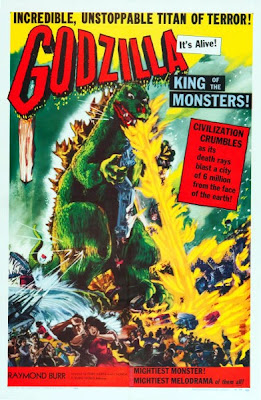 Way back in the year 2000, after the world breathed a huge sigh of relief over the whole Y2K whiff and eBay found itself burdened by a sudden glut of mint, never-removed from the box gas-masks and survival rations, I was both relieved and excited for the impending premiere of Godzilla 2000, marking the Big G's return to the American cineplex after a fifteen year hiatus -- with no Matthew Broderick, Dean Devilin, or Roland Emmerich anywhere in sight. Woo to the Hoo! Also, way back then, I decided it was high time I finally reviewed our hero's debut film -- both of them: the original Gojira and the domestically re-tooled Godzilla King of the Monsters. And this I did, and a good time was had by all. 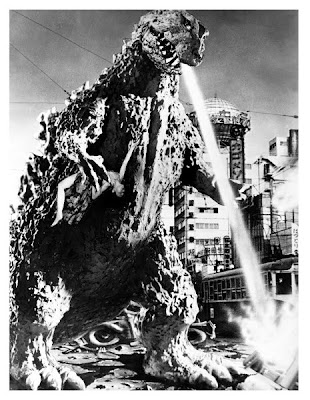 Coming just nine years after the atom bombs fell to end World War II, and directed by a man who witnessed firsthand the destruction and devastation those bombs caused, these, and several other factors and influences converged by chance, circumstance and a little bad luck to create the film Gojira. Seems fledgling producer Tomoyuki Tanaka was in some trouble when his current Indonesian based film fell apart over some hassles concerning the necessary work-permit visas. With a cast, crew and money to spend but no movie to expend them on, during the flight back to Japan, Tanaka, while looking at the vast Pacific below, began wondering what beasties might be lurking just below the surface and hit upon an idea. Only two years prior Japanese cinemas had been hit with the original King Kong for the first time and The Beast from 20000 Fathoms soon followed to much box-office success, making it no small wonder, then, that Tanaka decided Japan needed a giant monster of its very own. 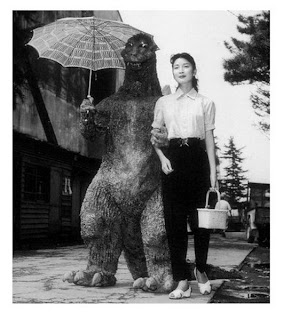 At the time of Gojira's release back in 1954, somber message and poignant symbolism aside, Toho Studios was taking a huge financial risk by putting that much money into what was essentially just a giant monster movie. And even though the end-result proved a big hit in Japan, to help defray some of the production costs, the studio opened an office in Los Angeles to help find and secure American distributors for all of their films. (Remember, Toho's Seven Samurai was released the same year.) Serendipitously, in Hollywood, with the major studios imploding, several smaller, independent companies were crawling out of the woodwork looking for a piece of the box-office pie, willing to snatch up almost anything. Honestly, looking overseas for more product made far better sense financially for these smaller companies; distributing already made films meant less expense and more profits, right? And with the resurgent sci-fi and monster boom of the 1950's already well-cemented, taking on a film like Gojira and turning it into Godzilla was an absolute no-brainer. 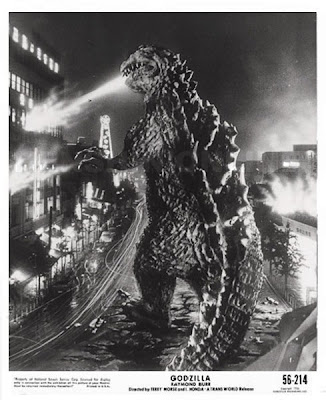 Look, I'm not breaking any new ground by stating that even though both films share a lot of the same footage they wound up being two completely different films. One, an allegory for mankind's retribution from the  atomic bomb personified, the other a wild creature feature with lots of mayhem and destruction. The former featuring a fraying love-triangle, the other featuring a guy who talks to the back of a lot of other people's heads. And I love them both unconditionally on their own merits. And if you'd like to know more about my thoughts on the history, making of, and meaning of this burgeoning franchise that's very dear to me, follow on through to the full reviews with the links provided below.

Full film review of Gojira at 3B Theater.

Poster campaign for Gojira at the Archive.

Full film review of Godzilla King of the Monsters at 3B Theater.

Poster campaign for Godzilla King of the Monsters at the Archive.


For the record, the whole thing will probably make a lot more sense if you start with the Gojira review first. Now get to stompin'! 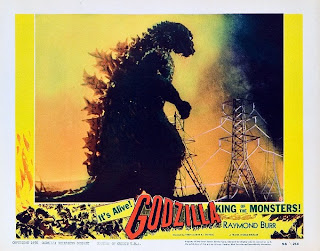 I have never seen both Gojira and Godzilla on the same day, let alone in the same year. Or decade, now that I think about it. This is something I very much need to do, and stat.

Have at it, I say. What always amazes me with the imported version, as much as they chopped it up, threw it up into the air, and stitched it back together where it fell with the new footage spliced in on top of it the Americanized film is quite amazing in its coherency.

And remember, the Oxygen Destroyer is the real monster in both. Have fun, and get to stomping!

JWS3. Recall seeing him in Dallas/Fort Worth in the 60's. A great showman....and a pioneer for segregation and equality. said...

Gojira was a warning of the devastation that atomic bombs could cause....and mankind's challenge to face the tragedy that these weapons of mass destruction could cause.
It is a very sobering message.
Dr. Sarazawa knew that his documentation and intimately, his life, must end so that no one could ever unleash the oxygen destroyer upon mankind.
Ask yourself this:
How different would the world be, had those who unleashed the atomic bomb onto the world, had taken a suicide pact and destroyed all of their documents, just as Sarazawa did...how our world would be?