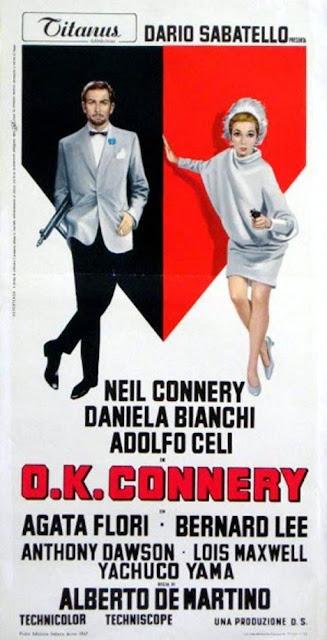 Operation: Kid Brother a/k/a O.K. Connery a/k/a Operation: Double 007 is producer Dario Sabatello and director Alberto De Martino's completely demented Italian James Bond knock-off about what happens when your top spy isn't available to save the world from a dastardly plot and your fall back plan is to recruit his younger brother. (Just roll with it, folks.) Made to help feed the world's spies and espionage-addled cinematic appetite, their end result is both great and goofy as all hell. The production landed Sean Connery's brother, Neil, for the lead (he's honestly not that terrible), and several other Bond mainstays, including Bernard Lee (M) and Lois Maxwell (Moneypenny, who kicks butt in this thing), and former Bond Girl Daniela Bianchi (From Russia with Love), and arch-villain Adolfo Celi (Thunderball) to round out the cast, who are all plugged into a plot that makes no sense, but you, like me, probably won't give a shit as this thing washes over you. And on top of all that, we get an inspired musical score co-conspired by the great Ennio Morricone and Bruno Nicolai, with a vocal assist by Maria Cristina Brancucci.


Yeah. Good luck getting that out of your head. Alas, the movie itself is not available on this side of the pond except on VHS, but the film was featured on Mystery Science Theater 3000; an episode that is currently available in one of the boxsets. 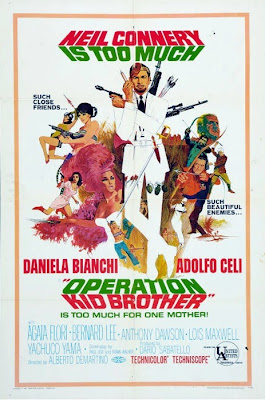