RePost :: Trailer Park :: Saddle Your Hogs for One Final Ride to Glory, Man! An A.I.P. / R.I.P. Tribute to Dennis Hopper. 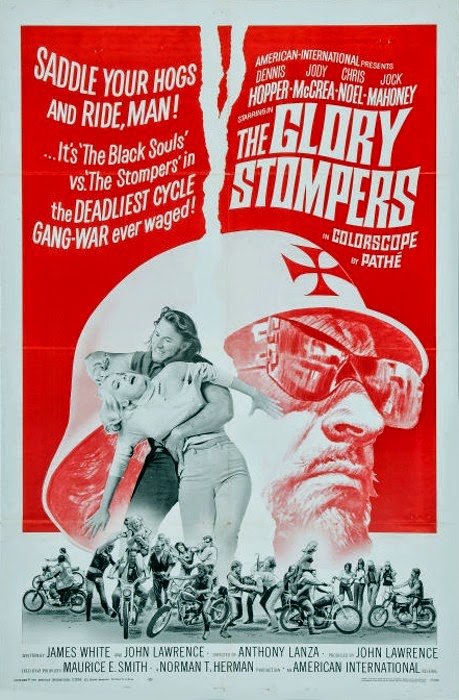 When The Black Souls rumble up on the leader of their bitter rivals, the Glory Stompers, who picked the wrong time and the wrong, secluded spot for some private snoggin' with his old lady, the skuzzy bikers proceed to stomp him into the earth. Thinking they've killed him, and with no other witnesses, they decide to kidnap the girlfriend, sneak her into Mexico, and sell her off to white slavers for some much needed drug money. However, turns out our hero wasn't quite dead, and he's soon in hot pursuit to get his girl back from this pack of degenerates before it's too late!

As an actor, director or producer it would take all of your (-- and several of your friend's --) fingers and toes to count off the films of Dennis Hopper that are better than American International's The Glory Stompers.

But, yeah, by no means a great film, it still ranks as one of my favorite performances by Hopper as the psychotic Chino, leader and head guru of the Black Souls. And his restrained efforts and barely-bottled manic intensity definitely vaults this film into the forefront of Jim and Sam's Outlaw Biker flicks; as the studio and its producers could never quite get the handle on the difference between the counter-culture hippie movement and the seedier biker scene. 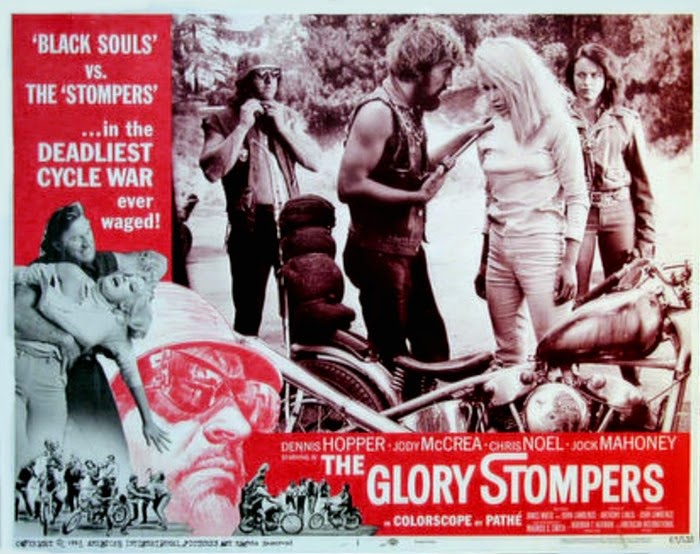 As the old saying goes, you can take a cat out of the jungle but you can't take the jungle out of a cat (-- and a better metaphor for Hopper's modus operandi I'm hard-pressed to type). And Chino is one such cat, with the sharp-end of several pointed plot-sticks poking at him -- the pursuing Stompers, protecting his brother, and dissension in the ranks, who all want to pull a train on their captive, to name but a few -- which brings these pressurized contents to an inevitable outcome. And then, when we reach the climax, and things go all to hell on him, Chino finally explodes in perhaps Hopper's greatest freak-out in a long and storied career of freaking-out on camera that's worth the price of admission alone.

However, there's plenty more on The Glory Stompers' menu to bring you to the table, including some stellar supporting scurve-o's provided by the likes of Robert Tessier and a barely recognizable Casey Kasem. I was pretty sure that was Kasem under Mouth's helmet and grubby beard, and this was confirmed when he cranked up some yells that reverberated into some familiar "Holy Super-Friends, Batman", territory. Kasem also served as an associate producer on this and The Cycle Savages, which is probably the worst AIP biker flick ever; and that's REALLY saying something. 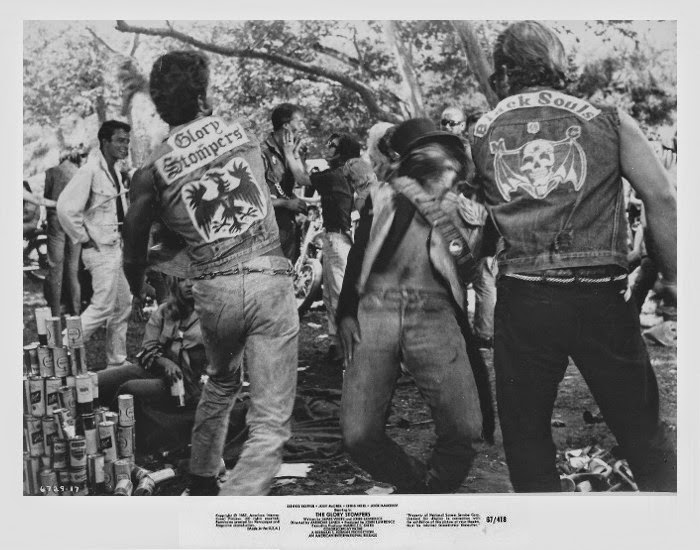 Behind the camera, after serving as an editor for the majority of Arch Hall Sr./Jr.'s output, Anthony Lanza makes his directorial debut, here, and he wasn't afraid to get down and wallow around in the dirt with his characters, so to speak, and took things as far as the censors would allow at the time. For the script, a tandem effort by John Lawrence and James White hits all the perquisite notes. And speaking of notes, one cannot fail to compliment the kicky-n-scratchy low-fuzz guitar soundtrack provided by Dave Allan and The Arrows. 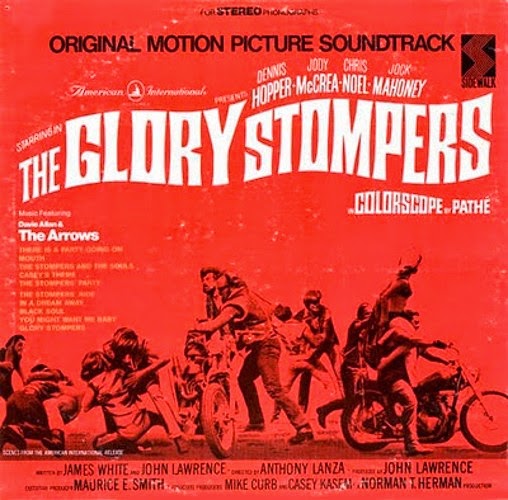 Now where was I? Oh, yeah. Before the Outlaw Biker Cycle ran out of gas,  Lawrence and White would hash out over a half-dozen genre flicks over the next few years with the likes of Helles Belles, The Hellcats, and The Mini-Skirt Mob. Also of note: Lanza, Lawrence, White and Kasem would also later team up again for The Incredible Two-Headed Transplant. 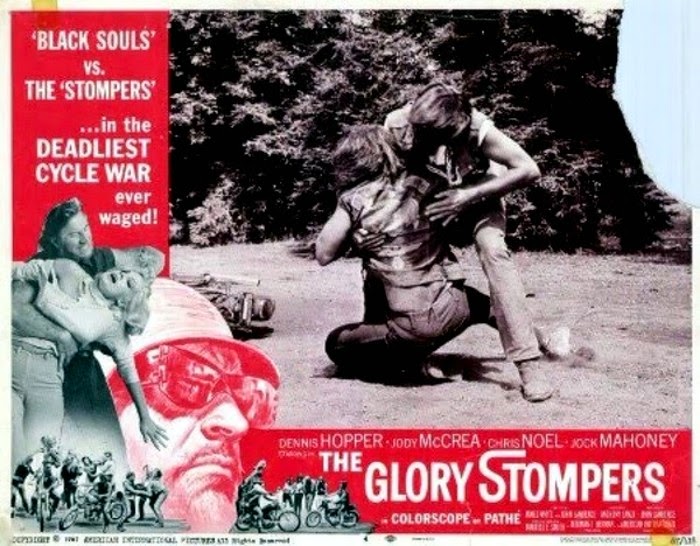 Sadly, out of all those old AIP biker flicks released on those wonderful Midnite Movie double-discs, The Glory Stompers remains maddeningly elusive. Therefore, it will take some effort to track yourselves down a copy but I think it's well worth your time. But if you're still not convinced consider this: 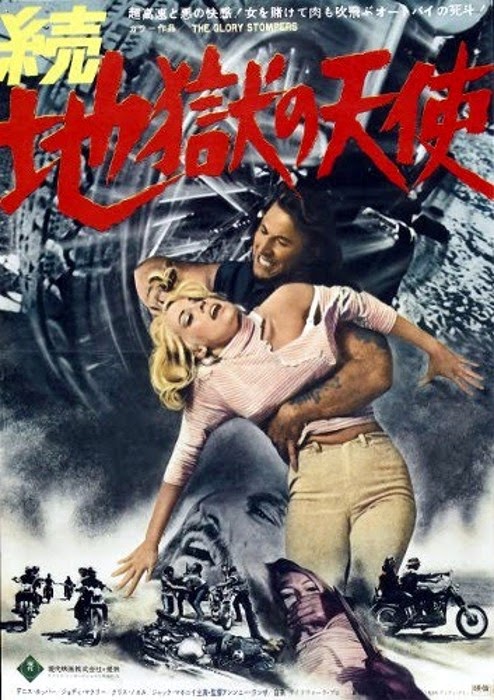 Despite everything already mentioned, perhaps the trippiest thing about The Glory Stompers lies with misplaced beachnik Jody McCrea as the hero, meaning one can't help but also draw parallels between this film and William Asher's Beach Party series. Seriously. Before they're attacked, McCrea and Chris Noel are having one of those Frankie and Annette fights, where she won't put-out and threatens to dump him if he doesn't put his motorcycle away and grow up. 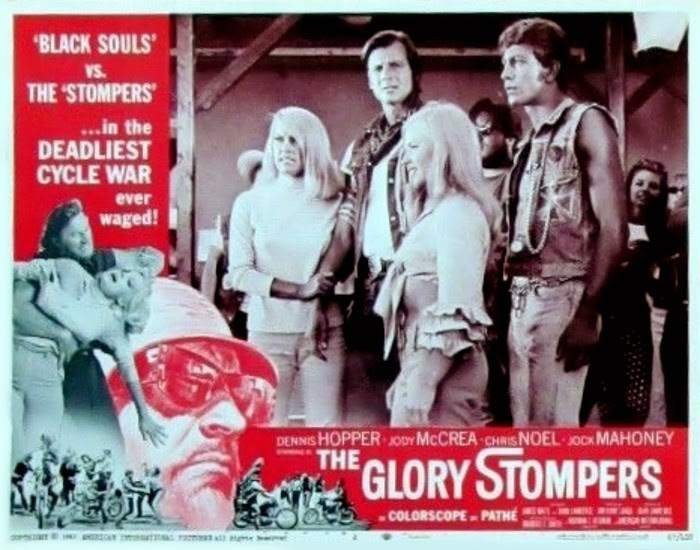 Thus, if we extrapolate further, that would make Hopper's character a surrogate for Erik Von Zipper, with The Black Souls standing in for the Ratz and Mice, who finally gets the upper hand on those surf-bums (The Stompers), and makes off with Annette with every intention of selling her as a sex slave somewhere south of the border. And that, my friends, is almost too damned hilarious to contemplate any further.

Poster campaign for The Glory Stompers at the Archive.

Newspaper ads for The Glory Stompers at the Morgue.
x 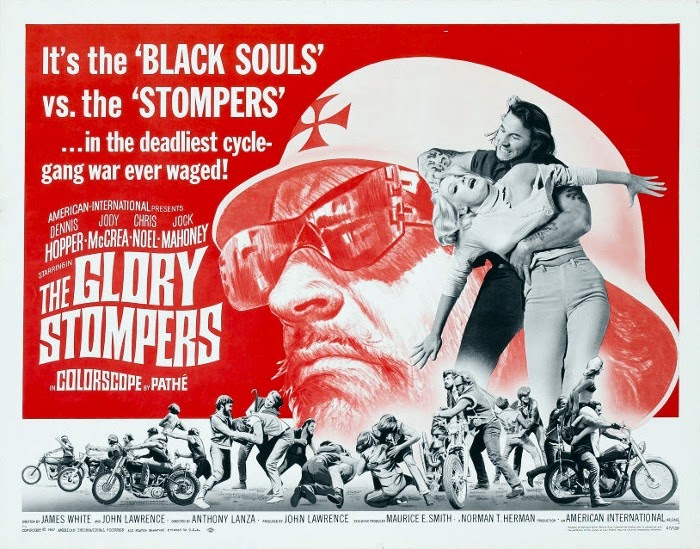